1969 was a big year. We landed on the moon, Woodstock herded half a million hippies into one corral, and Ford threw some nasty fangs into the muscle car wars.

The 1969 Ford Torino Cobra was about to bite down viciously on the competition.

This October 1968 Motor Trend ad said all that anyone needed to know about Ford’s most dangerous reptile, a Boss Snake that came equipped with 428 cubic inches of excellent reasons for its competition to run and hide on the street. 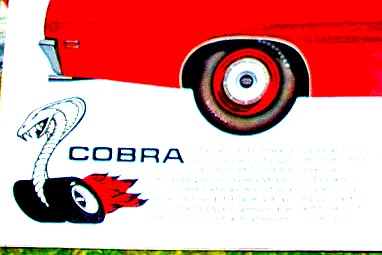 Throw in Ram-Air induction and the real deal hood scoop would make it difficult for Boss Snake drivers to hide their evil intentions to own the streets in ’69. This was no 60s Summer of Love moment for Ford, they wanted to inflict as much pain on their street enemies as any fire-breathing snake could deliver to its rear wheels.

The 1969 Ford Torino came with two rooflines that swept back in a fastback and semi-fastback design. The conventional look of the mid-sized Ford bore little outward evidence of its inner venom to the average person-hood scoop models and snake decals aside. 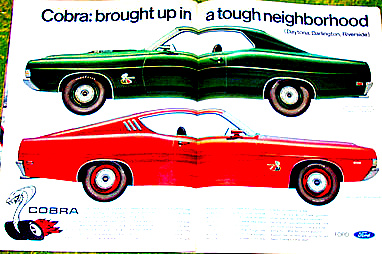 The dog dish hubcaps and steel wheels made the cars look frugal to the average person, but there was nothing frugal about a 428 big block under the hood. Maybe the average guy was thinking garter snake, but car guys knew better because this was a venomous snake with a very dangerous bite.

Oddly enough, the 1969 Ford Torino Cobra debuted in the fall of 1968, a time when Al Wilson had a Top 40 hit with his song “The Snake”. It was all about a snake that proved to be fatal to the woman in the song.

The competition may felt the same vibe on the street.