NOVEMBER 17 MSCC STAR OF THE WEEK: 1973 DART SPORT-THE SMOG ERA DIDN’T HAVE TO BE BORING

The Dodge Dart Sport began life as the Demon in 1971 but by ’73 they tamed the car and the name down to the Dart Sport.

The no-go smog era had arrived by then but they still had the 340 V-8 option available in these former Demons.

Dart Sports were still pretty stout cars by 1973 standards with the 340 4-speed option because they were light and pretty nimble.

They haven’t caught fire like their B-body cousins, the Road Runners and Chargers but this MSCC Star of the Week Petty Blue Dart was a very cool sight in the mirror.

It didn’t stay in the mirror for long.

NOVEMBER 16 MSCC STAR OF THE DAY: JAGUAR XKE-THEY LED THE SIXTIES IN STYLE

The 1960s were full of automotive surprises.

Most people in North America remember the decade for cars like the Mustang, the ’63 Sting Ray, the GTO and the Dodge Daytona but there’s another car that really set the tone for the “Swingin’ Sixties”.

That car was the Jaguar XKE. These cars debuted in ’61 and they looked liked they were doing 120 miles per hour when they were standing still.

XKEs were as fast as they looked back in 1961 so they made a big impression on the street and at the track.

This MSCC Star of the Day was on the street a few weeks ago and it definitely made the same impression in 2013.

NOV 15 MSCC STAR OF THE DAY: THE TRUEST EXPRESSION OF THE 70S-1971 FORD CONVERTIBLE AND A BOLER 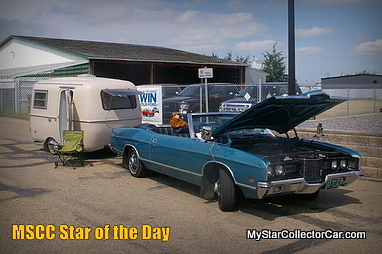 Most people think of the 70s as a blur of disco music and Doobie Brothers music blended into a shapeless form called called the “Me Decade”.

In a way, that’s accurate but it only describes a fraction of what went on in the 70s.

This was a decade shaped by events like Watergate, the end of the Viet Nam war and the Arab oil embargo.

The oil crisis defines this MSCC Star of the Day.

This was back in the Summer of 2012 but it could have been 1974 because that’s a lightweight Boler trailer attached to a large gas-guzzling ’71 Ford convertible.

Fuel economy on a vacation in the mid-70s was like thumbing your nose at OPEC. 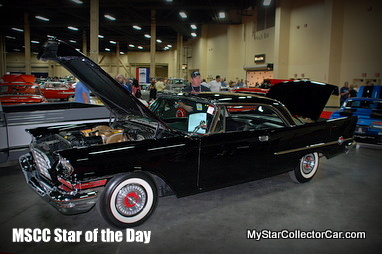 Uninformed observers believe the MOPAR Hemi muscle era began in ’69 or ’70 with Daytonas and Hemicudas.

Nothing could be more inaccurate. Mopar Hemi muscle began in 1955 when the first Chrysler 300A rolled off the assembly line.

They looked like something your life insurance guy would drive but these blunt force objects could crack 130 miles per hour with ease.

The 300C took it to a new level when one averaged 145 miles per hour on an oval. They were button-down cars with Incredible Hulk hearts. They were thugs in a nice suit.

This MSCC Star of the Day is a classic example of how far back Mopar muscle really goes in automotive history.

The VW van was built for everything but speed but they had tons of room. They could hold a entire school marching band and get them to a gig…eventually.

Nevertheless, someone spotted the massive interior and decided these VW vans would make an economical and fuel-efficient camper.

The Westfalia camper was the product of this forward thinking.

Two shining examples of VW recreational vehicle history were at a Volkswagen show back in 2012.

These MSCC Stars of the Day go back to an era when camping was truly camping.

NOVEMBER 12 MSCC STAR OF THE DAY: 2ND GEN PONTIAC TRANS AM-A LIGHT AT THE END OF THE 70S TUNNEL 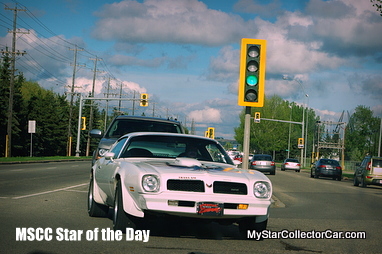 The mid-1970s was an automotive era that gets little to no respect. Part of this is due to the tepid performance of smog-fighting low compression engines.

The state-mandated bumpers didn’t help because Detroit had to build a car around a piece of regulated safety equipment.

The Pontiac Trans Am fought the lukewarm mid-70s attitude in a big way so it was light at the end of the tunnel in a tepid period for cars. This was a car that would have been a presence in any era but it was outstanding in the disco era.

These cars looked tough-Pontiac took an ordinary Firebird and put it on steroids. Today’s MSCC Star of the Day was on the street back in May and it proved how much these cars meant then and now.

NOVEMBER 11 MSCC STAR OF THE DAY: A ROW OF JEEPS MARK REMEMBRANCE AND VETERAN’S DAY 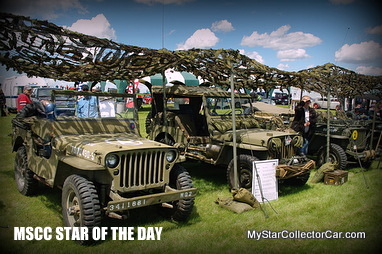 November 11th is Remembrance Day or Veteran’s Day depending on what part of the world you’re in but the occasion is the same.

This is a day to remember how much we owe to a generation that didn’t flinch when duty called.

The day is full of symbols like poppies or crosses but the message is clear that peace came with a price.

The Jeep is another symbol of the day.

The Jeep was born during the Second World War out of a need for an all-purpose, rugged and lightweight vehicle.

The Jeep met the challenge with ease and many veterans over the years owe their lives to this versatile little mule.

This row of MSCC Star of the Day Jeeps was at a June 2013 show and among the fleet were D-Day and Korean conflict survivors.

They seemed like a fitting choice for November 11th.