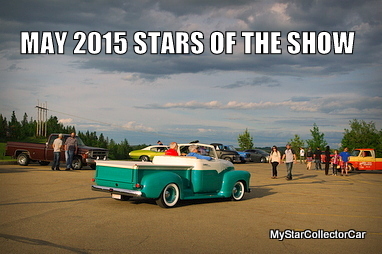 They may have the highest gearhead per capita ratio of any city in the world so if you take a weekend drive around the city during car season you are guaranteed to see a lot of old iron.

Car guys in Red Deer love to drive them but they also like to have a venue to show off their rides and talk to other car guys in a friendly setting.

That’s why they have organized weekly meetings at a local mall parking lot for several hundred of their close personal friends.

This weekly show literally has everything because you’ll see everything from high-end European cars and Japanese tuners to classic Mercs at this show and the numbers can hit 700 on a mid-summer night.

But the majority of these rides are classic, recognizable and vintage so here’s a look at a small percentage of what was at Red Deer Cruise Night in 2014.