We take plenty of notes during every car event and fill up plenty of writing pads along the way.

We have perfected a form of semi-legible chicken scratch that we can usually interpret when we want to run the story. 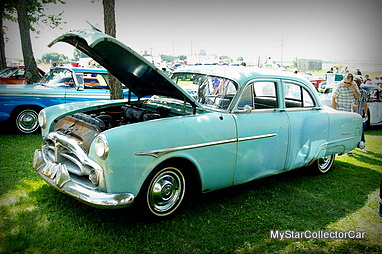 This story about a 1951 Packard Model 200 sedan was gathered three years ago at a small town show and somehow it slipped through the cracks until early in 2015 when we discovered the photos of the car and asked the important question:

Did we run that story?

The correct answer was no, but an early 50s Packard is not something you see very often at shows or on the road. The car was a striking survivor car and got our attention in a big way on that pleasant summer afternoon.

In our defense, a self-propelled stage coach built on an International Harvester Scout frame was at the same show and we were a little sidetracked by that unusual ride.

But a 1951 Packard is a story worthy of our attention in a big way, so we are happy to share this story with our readers and will invoke the better-late-than-never clause on this ride.

The 1951 Packard 200 was a base model in the small Packard stable during its model run and was designed for the frugal car owner with a limited budget. You could add extra features to these lower end Packards, but most buyers stayed within a price range and kept the option list to a bare minimum.

Randy Screpnek was the proud owner of the Packard and he was pretty happy with his purchase. Randy purchased his Packard from an auction when he realized the car was a “pretty cheap investment” and was “interesting” in his opinion.

Randy has a soft spot for unusual vehicles and his 1951 Packard fit right into that category for him. The car was originally purchased in Washington and had survived the ensuing decades very well with its former owner.Randy was quick to point out the unusual Ultramatic transmission in his Packard.

The Ultramatic was an automatic transmission unique to Packard and could be better described as a semi-automatic because it required the driver to shift between high and low gears with a column mounted shifter.

The low gear was used for hills and any situation that required better torque. The Ultramatic transmission was an early pioneer in the concept of locking torque convertors and provided more power from the engine to the rear wheels. 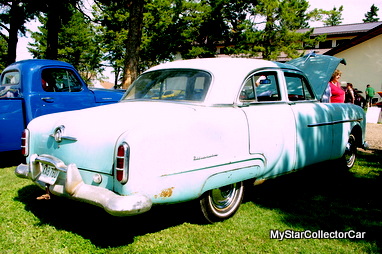 One of the drawbacks to this transmission was difficulty shifting from low to high on the fly, but Randy was happy to point out how he could start out in second if he was in high gear.

Randy had already owned the car for six years when we interviewed him in 2012 and he is the kind of car guy who gets very fond of his vehicles, so we assume he likes his vintage Packard more than ever in 2015.

We hope to see the two of them together again this summer at a car show and confirm that assumption.