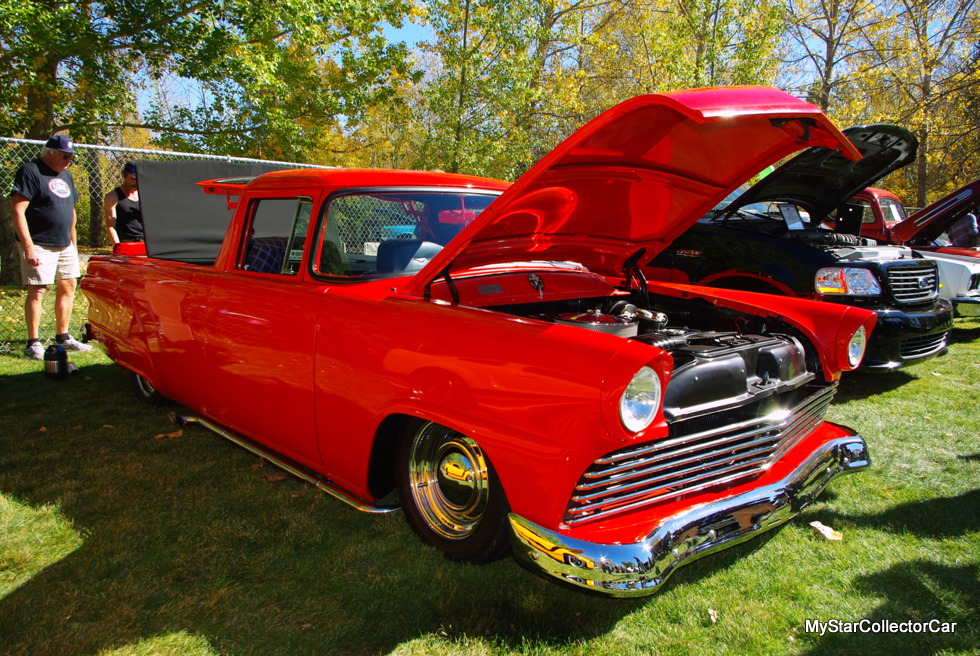 The custom car hobby never runs out of ideas. 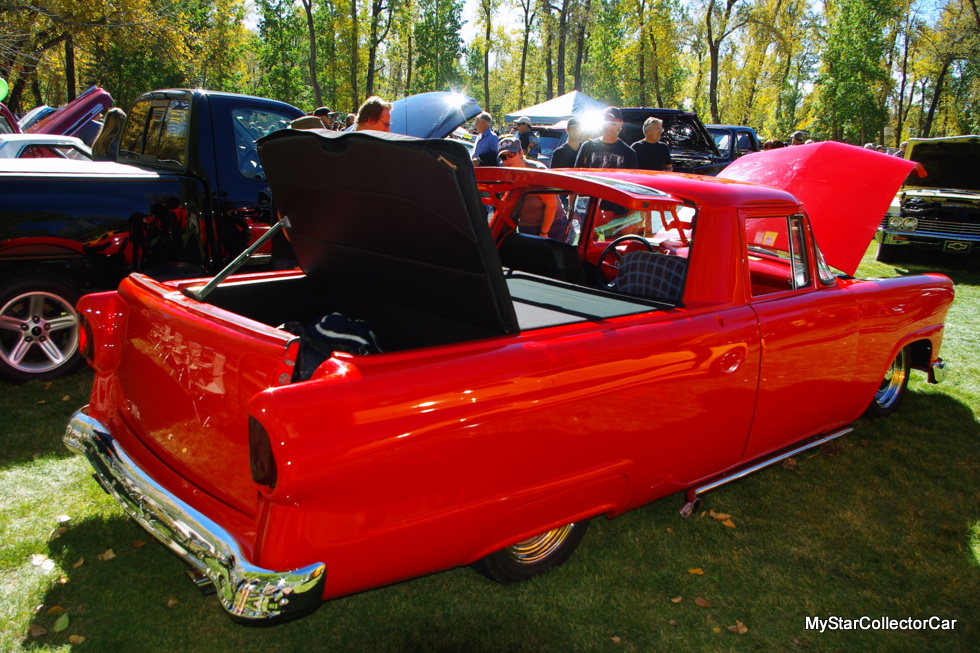 Blair Schultz had a concept in mind when he found a ’55 Ford that had been “whacked on the front end”. He said, “The Australian ute was the inspiration” but most people see his ’55 Ford as an early version of the Ford Ranchero. 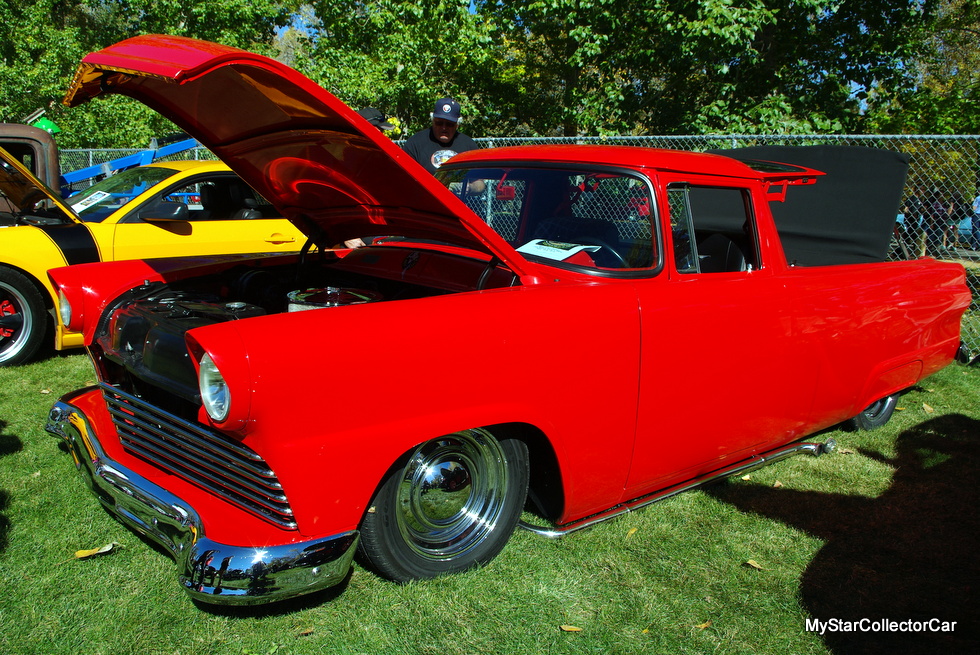 The project used up three ’55 Fords including a 4-door sedan, two- door sedan and a Ranch Wagon.  Blair took four years to complete the job because this was a massive job. Blair cut the quarters off the wagon and fitted them on the two-door sedan. The D-pillar on the wagon became the B-pillar on the reconstructed ’55 Sedan after an unimaginable amount of work and the removal of the roof.  Blair said he “lost count on the amount of welding rod” he used to fabricate this custom ’55 Ford. 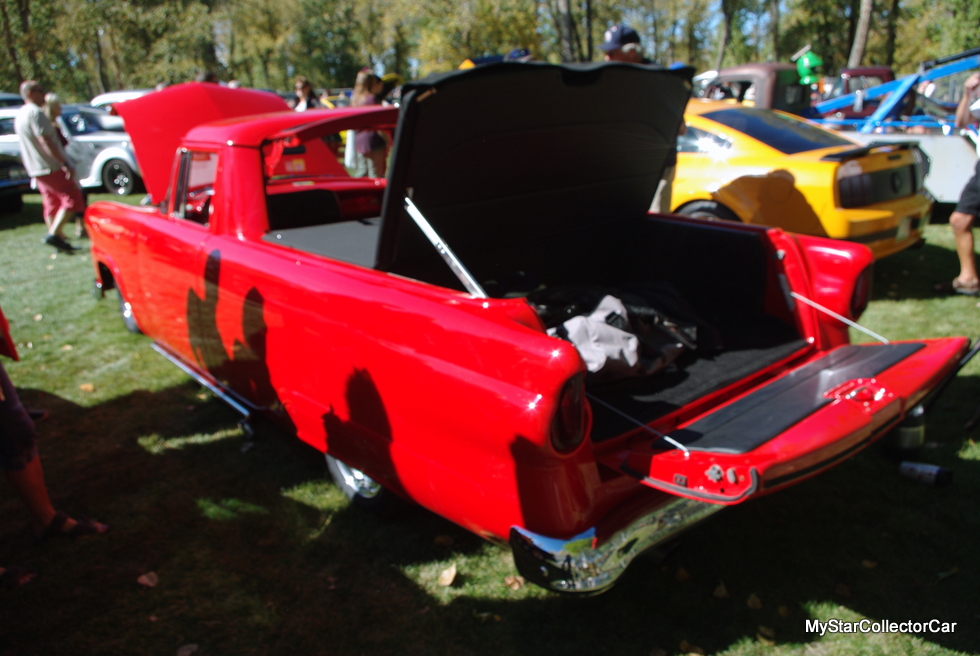 Blair admitted he had “lots of practice with welding” because he’s owned several Broncos over the years so the ’55 Ford was relatively easy for him. He had a generous host for a garage space so he “stayed on the project” to get it done in timely fashion.

He confessed he “would have taken a lot longer to do it” if he’d had his own space.  Other parts were scavenged from the donor cars to the point where Blair said the “only thing original on the sedan are the fender skirts”. 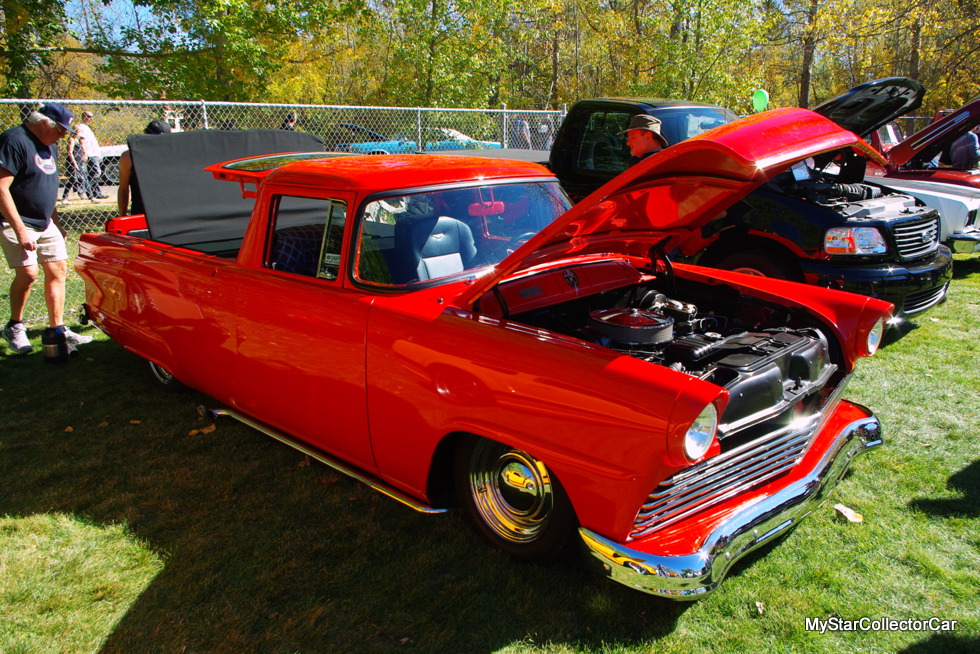 Blair pulled a 410 cubic inch V-8 out of a ’66 Mercury Parklane and inserted it under the hood of his custom ’55 Ford. He freshened it up a bit but he was really happy with the 330 horsepower from the factory.  There’s a 9” Ford rear end and Blair went with the ’66 Mercury automatic transmission. 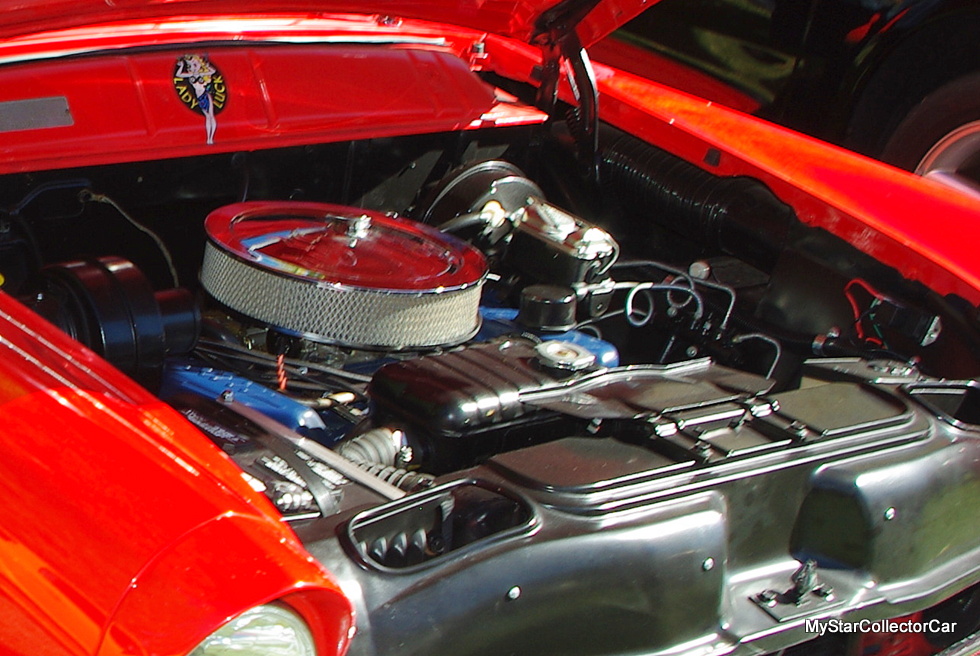 There was no room in the engine bay for power steering so Blair gets a workout in every parking lot. He added custom seats and used the rear window from the wagon to access a little air flow at car shows. 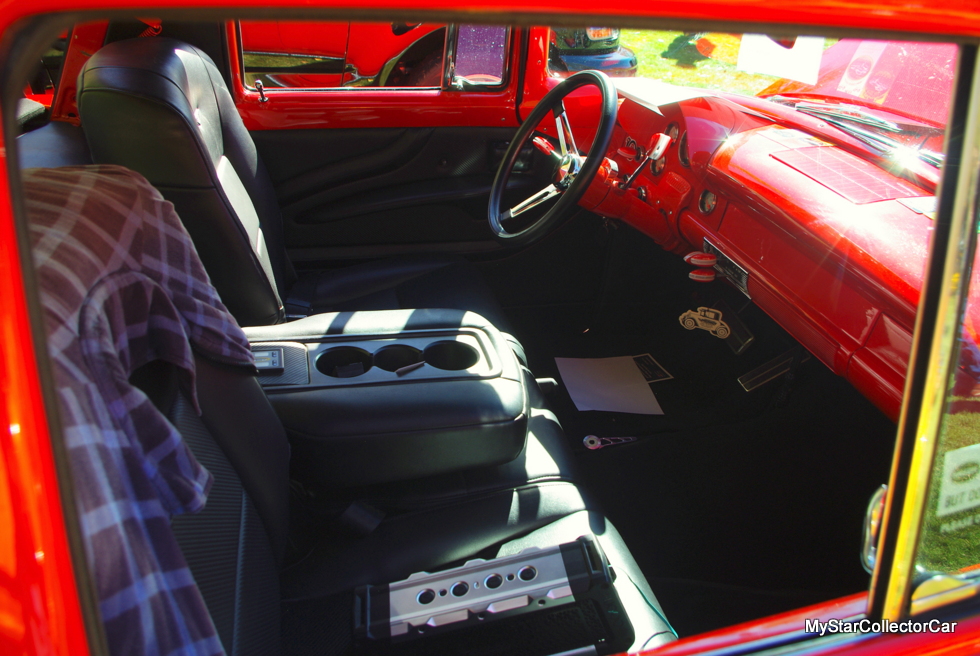 The rear cover for the truck bed is made out of convertible top material and Blair sees it as a work in progress because there are water issues in the compartment. He’d like to make it more water tight so he may go to a harder material to offset the leakage issues. 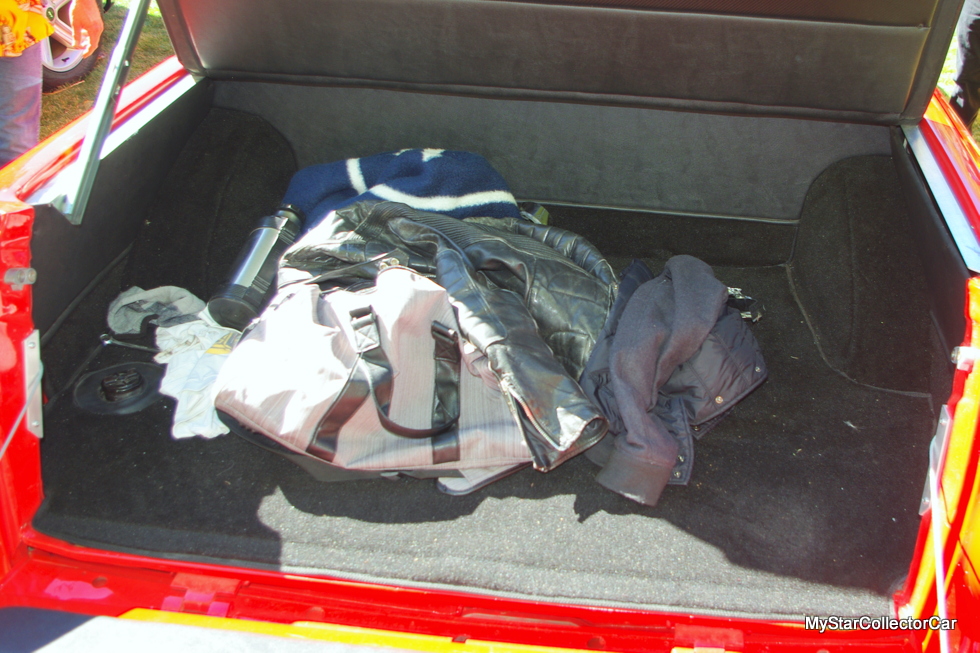 The tail lights are from a ’55 Merc station wagon and Blair said “everyone tells me they’re upside down—I hear it all the time”. 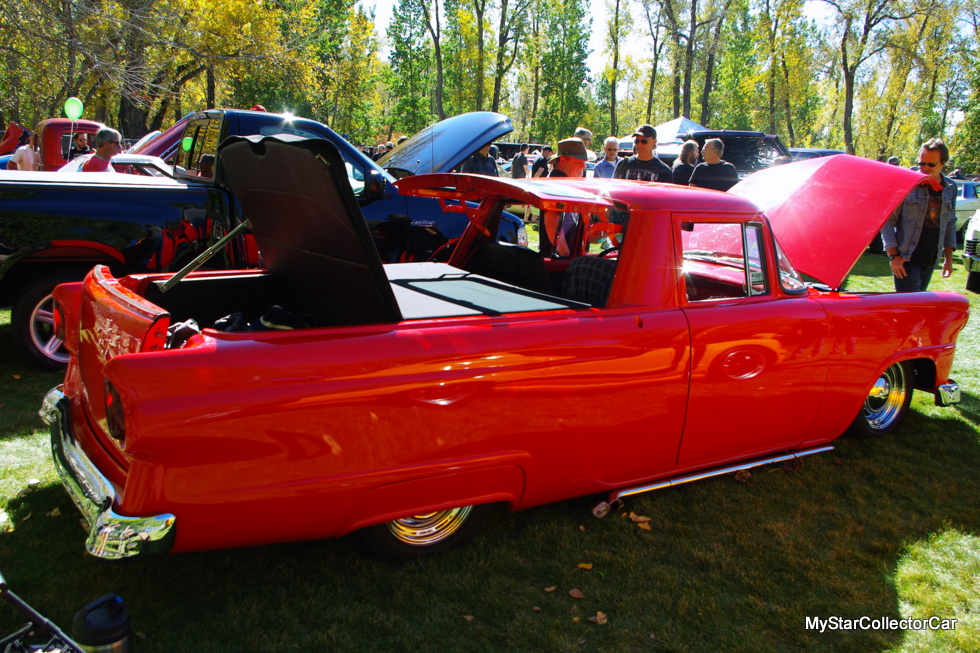 This is an air ride vehicle and Blair reported it “rides like a truck in the city but it’s nice on the highway”. The only thing missing is a sound system but Blair has already frenched in an antenna for the future. 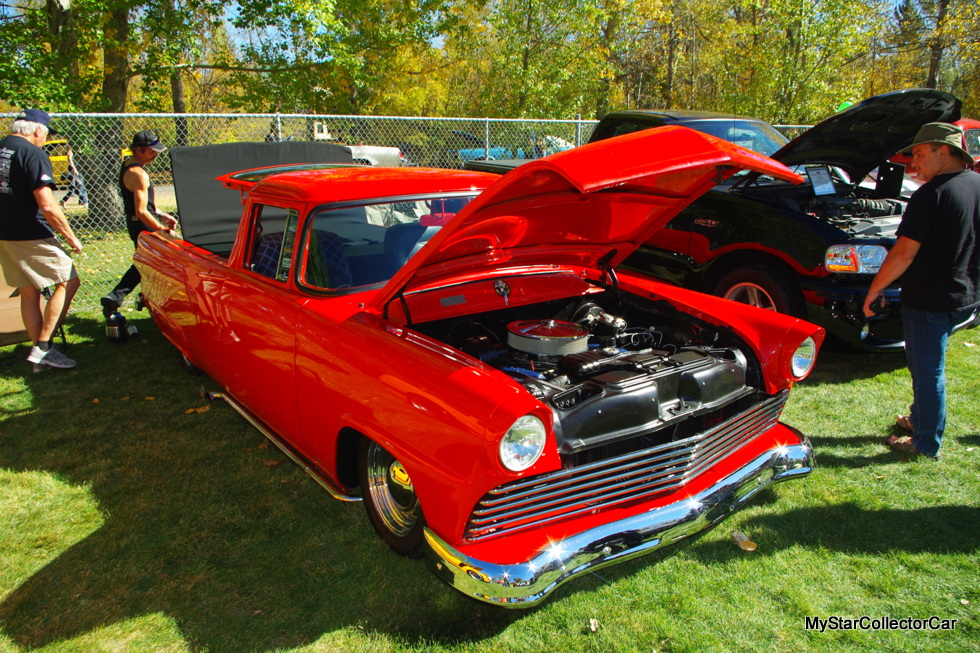 He was happy to answer the same Ranchero question over and over because he expected it when he built this custom Ford but Blair steers the conversation toward the Aussie ute explanation.

He explained it this way.

MSCC DECEMBER 6 STAR OF THE WEEK: ’72 BARRACUDA—HIBERNATION IS FOR...