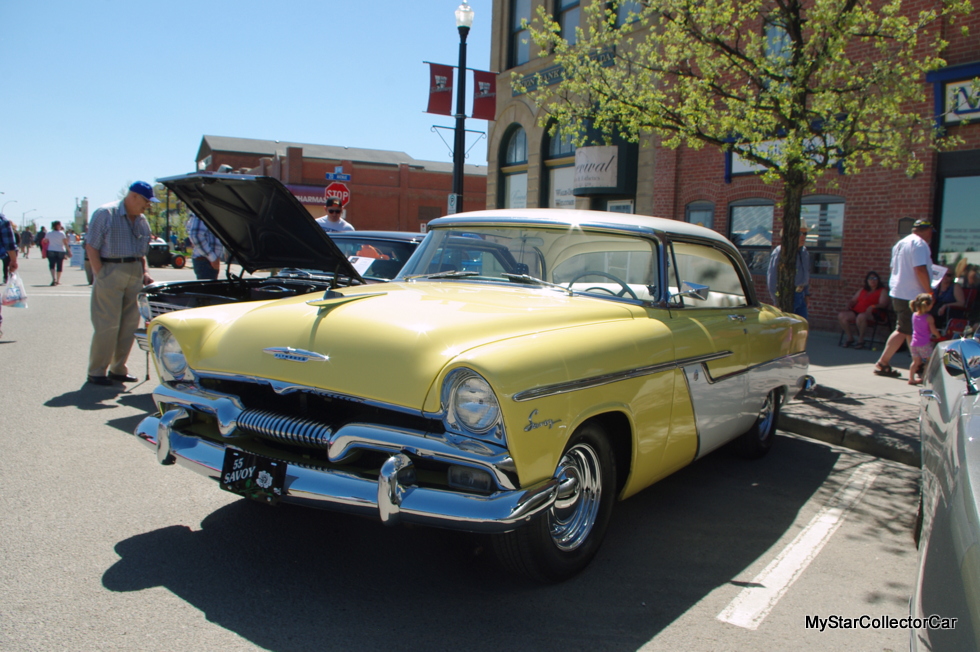 The Forward Look Chrysler products debuted in 1955 and they were a welcome departure from the pre-’55 conservative era.

‘Chrysler was known for rock solid performance, incredible engineering and brute force with the 1st Gen hemis but style wasn’t at the top of the list for buyers.’

Virgil Exner changed the game with the Forward Look lineup at Chrysler. 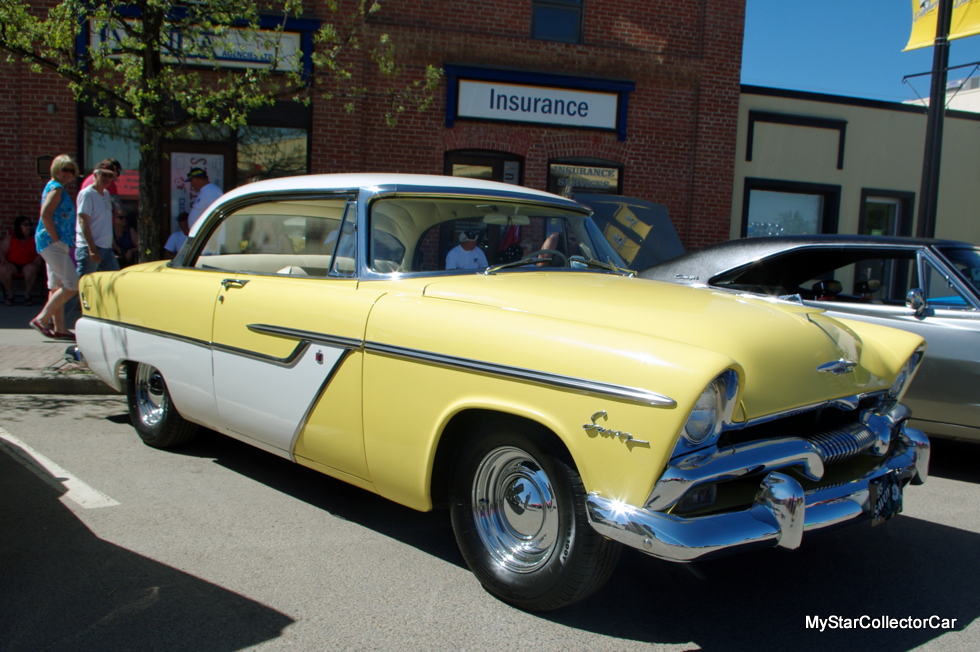 Stan Simonin’s grandfather bought into the Forward Look in a big way when he walked into a dealer 61 years ago and bought a brand new Plymouth Savoy. This wasn’t a fancy car—it was a bone stock, radio delete, three-on the tree two-door hardtop. The most unusual feature of the car was its Belvedere trim on a Savoy. This was basic mid-50s transportation but it did the job well because it handled the notorious Big Bend Road from British Columbia to Alberta with ease several times when Stan’s grandfather owned it. Stan is certain he made that run with his grandfather in the Savoy over the same road when he was two years old. 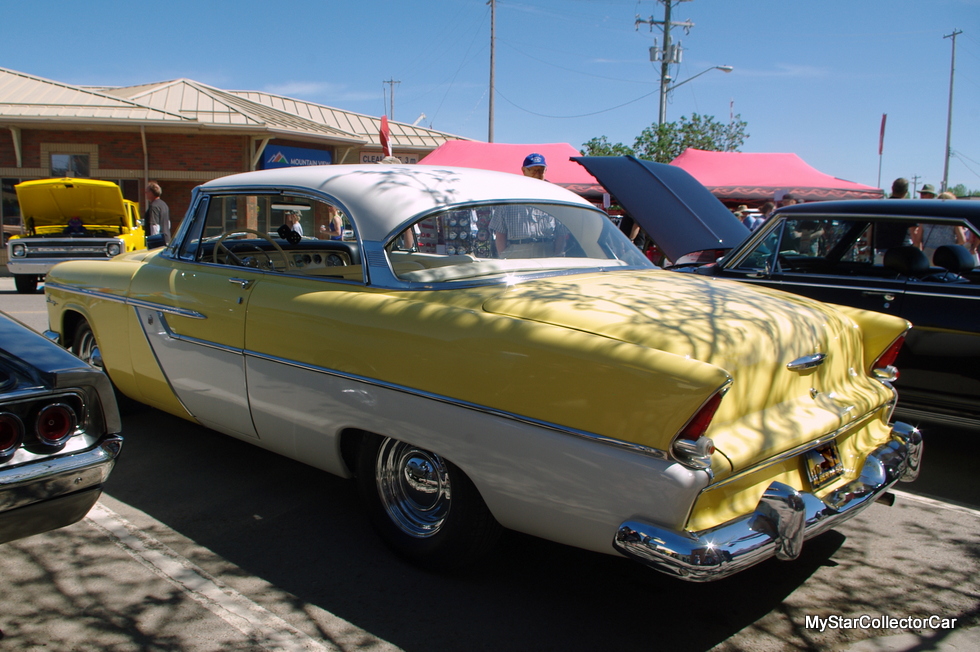 Stan was the next owner of the Savoy—his grandfather gave it to him and he took his driver’s test in the old Savoy. Stan described the car as a “200-dollar rust bucket” when he quit driving it a few years later. The ’55 Plymouth went into a deep ten-year sleep until Stan’s dad decided to restore it in the early 1980s. 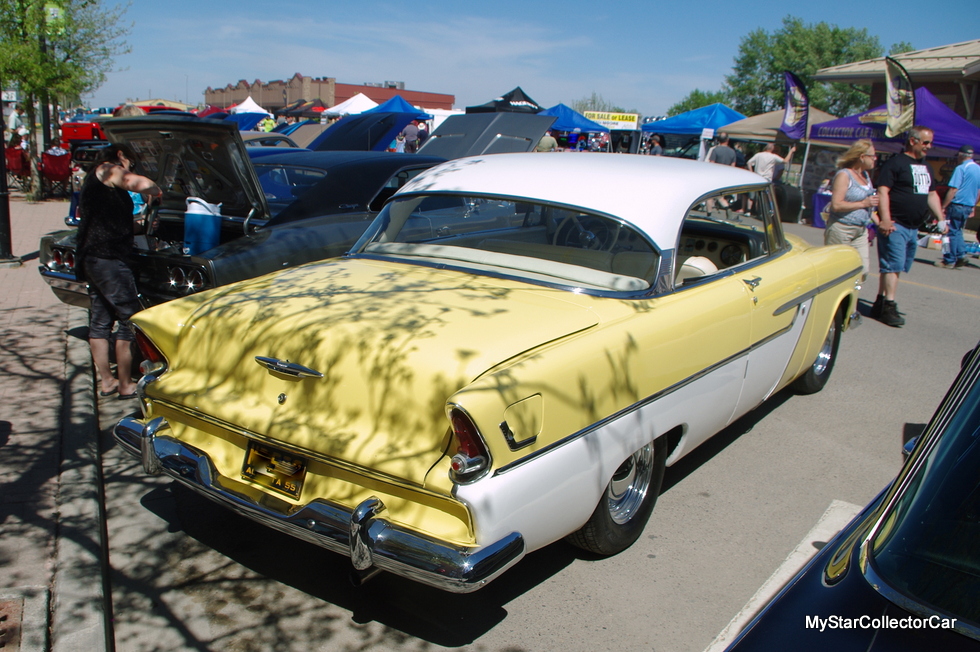 His dad drove it occasionally for a few years until he passed away and Stan bought the car back from his mom. The car was garaged since the restoration and to this day it retains a high quality appearance. 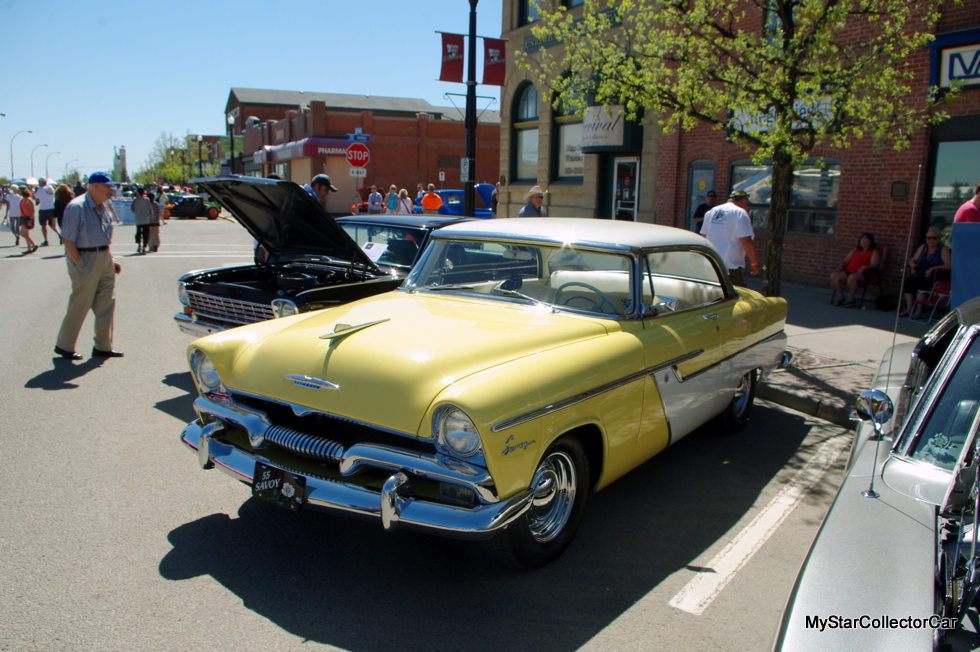 Stan is an absolute purist with the ’55 Savoy but he wanted to upgrade some of its features because he found he “wasn’t driving it as much”. The car was fine for mid-50s runs over primitive mountain roads but 21st century was a much bigger challenge.

The old flattie six-cylinder was tired so Stan weighed the costs of a rebuild and marginal increase in performance over the merits of an engine with more brute force. He picked the ‘more power’ option but had he not done that it was a “fix it or sell it” proposition. 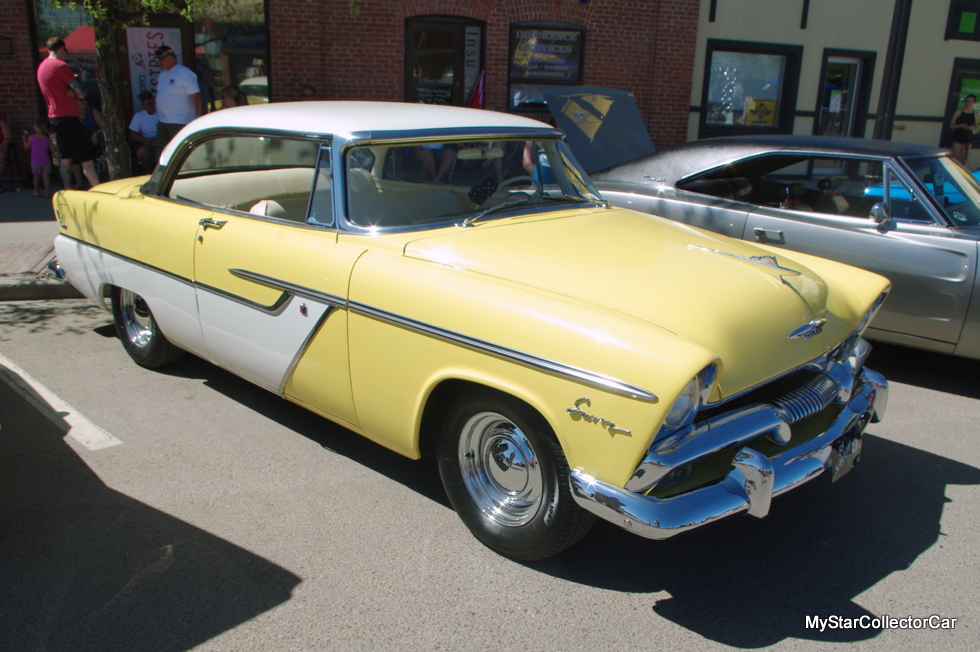 Stan found a 241-cubic-inch 1st generation hemi and had a famous racing engine builder redo the old V-8. He kept the Savoy’s three-speed overdrive as part of the package but the Plymouth took on a new life with the hemi under the hood. 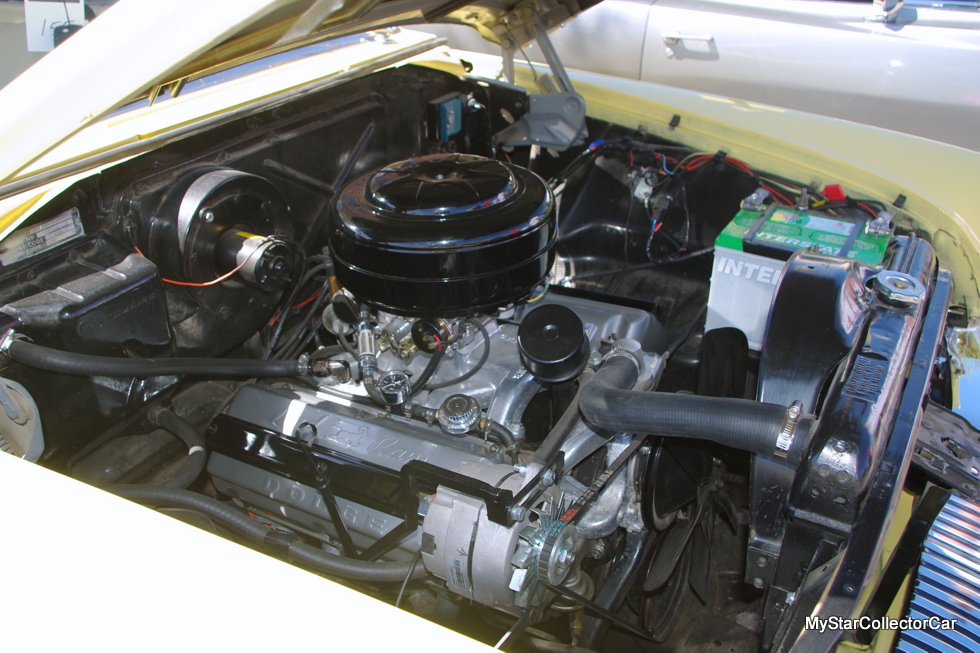 Despite the introduction of the hemi , Stan described the Plymouth’s performance this way, “pretty good, but not a lot of power. It drops to about 2500 rpm at 70 miles per hour with the overdrive”. 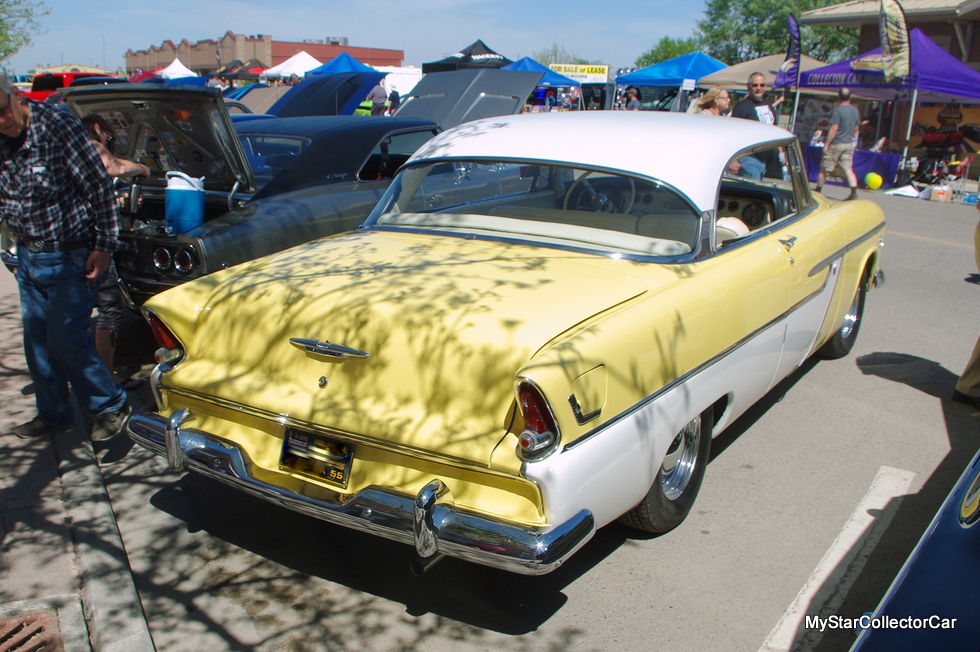 Stan did a few other things to the Plymouth—he added disc brakes to the front and a dual master cylinder because today’s cars can stop on a dime but yesterday’s cars can’t. He upgraded the wheels and added radial tires and he added, “It’s the first time I’ve ever driven it on radials”.

Stan admits he “agonized over the changes like the wheels” because he’s a firm believer in “keeping things the way they were”, but the modifications make the car far more appealing in 2016 traffic. 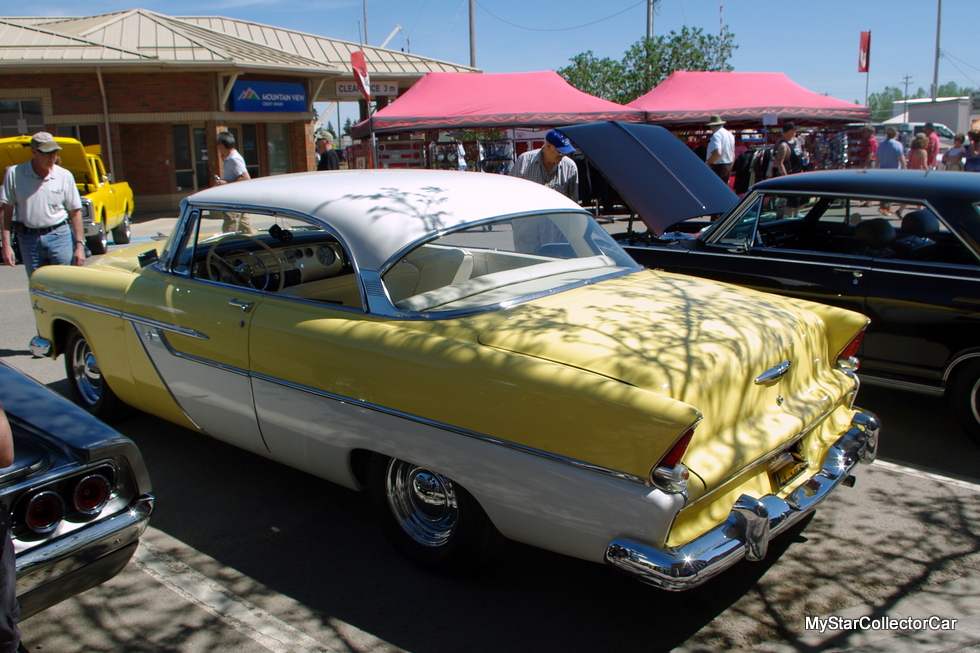 He’s planning a few road trips in his reborn ’55 Savoy in 2016 and in the long term his daughter will be the next owner and then it goes to her child.

‘The transfer of the Plymouth to Stan’s grandchild would make this ’55 Savoy a five generation family car—that’s Guinness World record territory.’