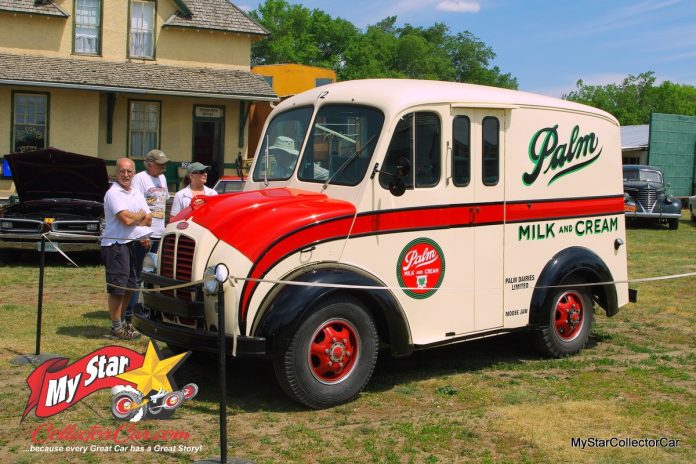 Divco trucks were specifically designed for delivery in an urban environment.

The Divco name is short for Detroit Industrial Vehicle Company and the trucks enjoyed a 60 year production run from 1926 to 1986.

The small Canadian prairie city of Moose Jaw, Saskatchewan was one of those towns where home delivery for milk was provided by Palm Dairies and one of the milkmen was Cec Stapleton.

The Divcos were destined to replace the horse and wagon in Moose Jaw when the milk trucks arrived in the mid-50s. It may seem unusual to learn that horse-drawn wagons were still in use well into the 20th century, but the reliable equine milk delivery wagons provided faithful service until the arrival of the Divcos.

Cec Stapleton was one of the milkmen who made the transition from horse reins to steering wheel in the mid-50s with the arrival of the Divco trucks. The Divcos were well-suited to the urban world where the trucks’ design and modest speeds were a good match for stop and go delivery in towns.

Eventually Cec had to upgrade to a General Motors delivery truck for his out-of-town routes but the Divco trucks were always an important part of his career memories.

The Divcos were also a big part of the childhood memories for Cec’s sons, Doug and Rod.

Many years later, Doug came across a familiar-looking Palm Dairies Divco truck in a Central Alberta area storage yard. The years had not been kind to the old truck, but Doug still recognized the Divco from his childhood days in Moose Jaw.

Suddenly a self-professed non-car guy decided to save the Divco from the crusher and bring it back to its former glory.

Doug stored the truck at a cousin’s farm in Saskatchewan while he and brother Rod figured out how to give the story of a battered old milk truck, with strong roots in their family history, a happy ending.

The price tag was incredibly high for a complete restoration, so the brothers searched for a viable solution to their problem.

Eventually they found a great way to bring the Divco back to life when they contacted the Sukanen Ship Museum just outside of Moose Jaw.

They have a 40-acre site that houses significant buildings, artifacts and vehicles from a bygone era.

The Divco milk truck with its Moose Jaw history was a great fit for the museum and the Stapleton family’s desire to save the truck, so they were happy to donate it and have them breathe life back into the old truck.

The restoration process was not easy and required some cost-effective measures for the budget-minded museum.

The Divco now runs a GM four-cylinder engine coupled to an automatic transmission and sports a small gas tank with just enough capacity to get the truck through a parade route-but probably not a milk route-in Moose Jaw.

The official unveiling of the Divco included the Stapleton family and one of the last surviving Divco drivers from the early years of the trucks, Cec Smith.

Cec did not spend as much time behind the wheel of the Divcos as the rest of the delivery drivers, but he has very fond memories of the trucks.

Cec Smith, like Cec Stapleton, was a milkman when the horses were replaced by these unique little delivery trucks and his small model truck is a reminder of a time when home milk delivery was a way of life in North America.

This Divco story did have a happy ending.

The Stapleton brothers were able to save a memory of their late father that will always have a place of honor in the history of the Moose Jaw area and the Sukanen Ship Museum gets an amazing artifact with local roots.