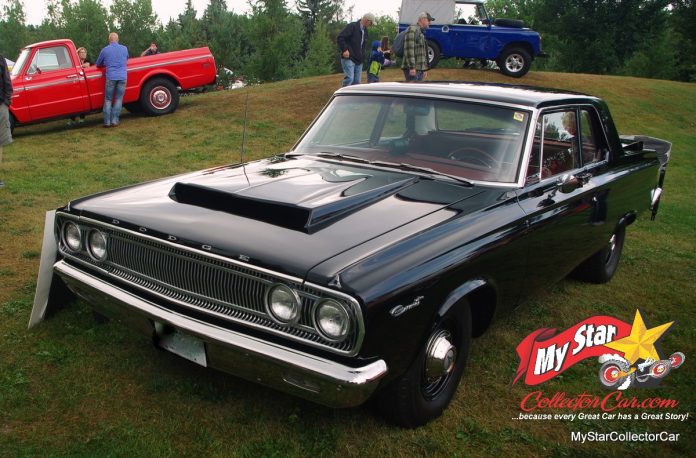 The Max Wedge Mopars were the most feared competitors at the track back in the early 60s because Chrysler brought its ‘A’ game every time.

The car is a barebones two-door sedan, but the original owner ticked off the 426 cubic inch V-8 option when he ordered it. That was the base 426 with a four-barrel carburetor. According to Bill, only 44 buyers opted for the 426 in this combination.

Bill found this car because a buddy spotted it back in 1998 and told him about it–he said, “Bill will buy any Dodge”. Bill was glad he bought this Dodge because of its rarity. The 426 was replaced with a 440, so that became part of the negotiation, because the original engine was still in the guy’s shop. Bill put delivery and the original 426 on the table before he bought the car and the previous owner bit on the deal.

The 440 was yanked and replaced with the original 426. Bill said the biggest problem was the size of the fuel lines, so he replaced them with the correct lines and the car ran fine. This was a 4-barrel car, but Bill wanted the look and performance of a Max Wedge, so he yanked the 4-barrel and added the two four-barrel ram induction setup.

The exhaust manifolds were replaced with a setup that approximated the Max Wedge. Bill also added a hood scoop to show the world this ’65 Dodge had migrated from its stock 426 wedge look to a more track-friendly look.

The Dodge also got a new paint job in its original factory black, and Bill added steel wheels to give the car more Max Wedge credibility. This car even has the incredibly rare factory backup light delete pieces.

There was a period when Bill didn’t own the car–he sold it several years ago and it went into hibernation at a museum. There were a few owners after Bill, but none of them ran up the miles, so the car still has only 63,000 original miles.

You can see the originality of this ’65 Coronet because this car still has its original interior and rubber floor mats–the original spare is still in the trunk.

Bill has learned he has to constantly explain this car because, he says, “A lot of people don’t know what it is”. Part of the reason may be because these cars were never sold in Canada, but the other reason is because the Max Wedge history is less obvious to people in 2021. Bill is happy to give them a Mopar history lesson every time he’s asked about the ’65 Coronet.

This car may have come from a museum, but it leads a far different life under Bill’s watch. He admits he “pounds on it daily” so this big, bad Dodge definitely gets its exercise. He likes the way it performs, and he summed its transformation from 426 Wedge to 426 Max Wedge with a simple question.

Who wants to put a four-barrel on it?

NOVEMBER 18, 2014: 70s TRUCKS–THE MISUNDERSTOOD AND UNLOVED REFUGEES FROM THE...