‘A Charlie Brown Christmas’ has been a holiday favorite since 1965.

A few of us have watched it every year since we were kids roughly the same age as this cartoon misfit when the show first aired in ’65.

Some may even remember that a brief preview of ‘A Charlie Brown Christmas’ aired on ‘The Ed Sullivan Show’ on the Sunday before the full episode aired later that week.

The clip featured Linus on stage with his famous explanation of Christmas.

No kid really wanted to be Charlie Brown, unless he was fond of life as a social outcast with endless ridicule. But we felt sorry for Charlie because the kid was on the bottom rung of the social ladder and could only count the blanket-hugging Linus on his short list of friends.

Charlie’s dog Snoopy even had questionable loyalty to him, thus Charlie was an outcast in his cartoon world of mean-spirited kids and faithless dogs. Christmas was just another way for Charlie to find rejection in large doses and present a severe test on his already fragile psyche.

Charlie wallowed in his own misery and endured indignities like an empty mail box during an era when Christmas cards sent by mail were a measure of popularity.

Eventually he sought out the professional services of his arch-nemesis Lucy, a self-appointed amateur psychiatrist, and she suggested he take on a director’s role for the Christmas pageant.

The offer buoyed Charlie’s spirits and he eagerly accepted the role. The problem was Charlie had no more respect or control over the kids in the Christmas rehearsal than he had outside of the director’s role.

His rehearsal was largely an assembly of unwilling participants whose only bond was their contempt for Charlie Brown. Things got so bad Lucy had to intervene on Charlie’s behalf so he could grab a thin layer of control over the rehearsal.

Charlie was given responsibility for a Christmas tree purchase to use in the pageant and was instructed not to screw up his choice for the perfect tree. The group suggestions included aluminum trees with little connection to the real trees and an affront to Charlie’s view of Christmas.

Something had been lost in Charlie’s vision of Christmas and, even if he could not identify what had been lost, he began to understand why it was missing, given the unchecked greed and commercialism he witnessed in his kid world.

The Christmas tree lot was a dizzying collection of fake trees and only heightened Charlie’s confusion until he spotted a spindly little real tree at the back of the lot.

Charlie instantly connected with the unwanted little tree and bought it, against the advice of Linus.

The tree was not well-received by the other kids when Charlie brought it back to the rehearsal and eventually he took it home after he watched Linus give his on-stage interpretation about the meaning of Christmas.

The tree collapsed under the weight of the first bulb and Charlie was devastated with his role in the murder of the tree.

However, the story had a happy ending when the rest of the kids showed up and saved the tree with an amazing display of lights and tinsel.

So where is the lesson for car guys found in ‘A Charlie Brown Christmas’?

Maybe the world hates you for your car choice decisions, but eventually you will transform an old wreck into a thing of beauty. 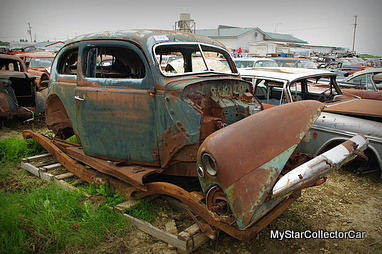 And maybe you will even get some help along the way when pity kicks into the equation.