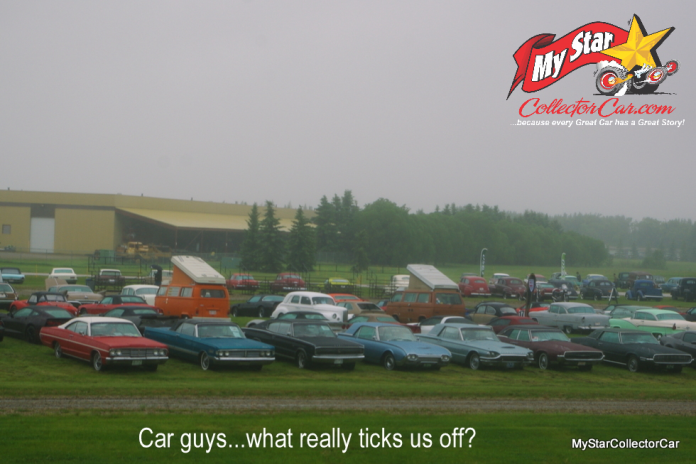 MyStarCollectorCar has been on the frontlines of the car hobby for the past 11 years and we are very familiar with the culture behind the vintage vehicle world.

However, we decided to concentrate on the controversial points that pit car guy against car guy in the hobby. One bone of contention is the powertrain choice in the vehicle. A factory stock setup is the only way to fly for many car guys, while others can hardly wait to rip out the old Flivver’s (i.e. Model T or pretty much any early 20th century vehicle) heart and install a V-8 engine in its place.

The hot rod culture started many decades ago during a time even before the Elvis era. We at MyStarCollectorCar are certain the heated debate between factory purists and hot rodders began when the first factory four-banger was yanked out of an early 20th century car and replaced with a beefier V-8 engine-flathead or otherwise.

It’s clear the two camps have a difference of opinions about the journey in a vintage vehicle. One group enjoys a leisurely trip down memory lane while the other group likes to rocket down memory lane at warp drive. One group feels the need for nostalgia in vintage rides and the other group feels the need for speed in vintage rides.

Is there a peace treaty on the horizon for the two camps? Our best guess is no-but MyStarCollectorCar has encountered some amazing examples of stock and modified rides over the years. We believe the best choices are based upon the condition of the vehicle prior to modification, but we also recognize that ownership has its privileges when it comes to vintage iron and owner’s choices.

The second hot button issue is a direct result of resto mod projects and once again involves engine swaps. It’s no secret the most common engine swap of choice in the car hobby is the SBC Chevy, primarily the 350 cubic inch crate engine in all its variations.

The small block Chevy engine can be massaged into a variety of vintage cars and offers easy access to performance or other components for its buyers. The aftermarket world also offers a wide of array of efficient ways to retro fit the Chevy small block into another vehicle.

The conflict between car guys arises when the other vehicle is not a Chevy product and sparks a debate about whether a Chevy engine belongs in a non-Chevy vehicle. The idea seems practical and smart to some car guys, while others consider this game plan to be nothing short of car guy heresy or treason.

For example, a vintage Ford with a Chevy engine under its hood may be a cost-effective swap for a car guy on a budget-but some Ford guys have to resist the urge to run over the vintage Ford several times with a vintage Caterpillar D8 to put the old car out of its misery.

MyStarCollectorCar is happy to report there are not many conflicts in the car hobby, but we doubt the aforementioned issues are headed for a resolution in the near future.