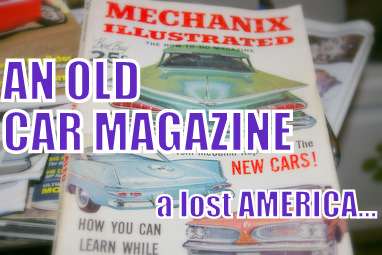 Canadians have a unique perspective on the United States-the most powerful country in the world.

We’re like first cousins who live right next door because we have a mutual geographical location and a mutual family history-particularly in western Canada.

‘If your family has been in the Canadian West for over 100 years, it’s a slam-dunk that one or both of your grandparents have a direct connection to the States. As the old  Sister Sledge song goes-“we are family”.

Canadians like looking over the fence at the U.S.A.– the neighbor/cousin with the giant house, nice cars and the can-do attitude but this old Mechanix Illustrated from November 1958 caused some concerns to bubble to the surface.

Our neighbor has changed…

The most obvious thing found in this old magazine is the sheer dominance of the domestic car industry.

It’s here in the words of the legendary Tom McCahill in his article about the 1959 Chevy Impala “You don’t need a Gallup Poll or a complete report from the Electoral College to know that Chevrolet must be considered the American buyer’s Number One Choice. No other manufacturer in the world, for that matter has pumped out as many cars as this General Motors division”.

Honda and Toyota were still a good 25 years away from rocking that boat and Chevy was about 50 years away from a big leg up with tax dollars. Uncle Tom McCahill had health issues later in life-that GM bailout news would have catapulted him into intensive care.

Another thing that really jumped out in this old magazine was the optimism. History tells that 1958 spelled the end of a fairly serious recession in the States, but look at how they handled it back then.

Instead of today’s chronically grim news about layoffs and housing disasters, MI gave us ad after ad offering solutions to employment issues .One of the best is found in an International Correspondence School ad. The caption reads, in bold letters, “This man is a security risk!”

Dig deeper and you find out that this clean cut guy is a “security risk” because with the right kind of training, he could be a better provider to his family instead of just coasting along.

Nowhere to be found are excuses for this guy because ICS can give him the opportunity-all he has to does is step up to the plate.

These excuses are perpetuated by today’s media where every form of failure alibi is documented by journalistic airheads and legitimized to the point where if your company lays you off-there are no other options.

This old MI has page after page full of options-their ads pushed training in areas like locksmiths, mechanics and TV repair. They were recession-proof jobs because that’s how things were in late 1958 America-you always had opportunities to improve in life, not bask in the warm glow of pity.

So instead of wallowing in the mire of another dismal factory layoff report on the CBS News, you hit the books and became a far more employable guy. Adversity was answered with innovation back in 1958 America-that’s what Canadians expected to see when we looked over the fence and this old magazine delivered a clear message-in the States opportunity was a reality, not a political cliche.

The last thing that really jumped out in this old magazine was a story on ‘Copter Cops’-this was an article on highly specialized Highway Patrol copters designed to land in the middle of an accident scene. They looked like something out of Star Trek and these hi-tech ‘copters were offered as a solution to a growing freeway congestion problem.

A nice change from 2010 – that version would simply be a grim story about a multi-vehicle fatality-ridden crash on a major highway…and no solutions.

The real point here is that the U.S. has changed. The house is still big, but it needs paint and the driveway is still full of cars-with Honda and Toyota badges.

That view over the fence looked a lot better in 1958, but one thing has always been obvious about our Southern cousins-never, never count them out.

There’s hope and life lessons in that old MI from November 1958-that’s the American Way, the “can–do” stuff. It always has been and always will be so…ultimately we’re not really worried about our neighbors.

JIM:”RE: Your headline HOW A 51 YEAR OLD CAR MAGAZINE REFLECTS A LOST AMERICA. Your story was inspiring. If more people here in the States could get just a little bit of that positive attitude, I think things would clear up in a hurry. Hey, God Bless Canada”.