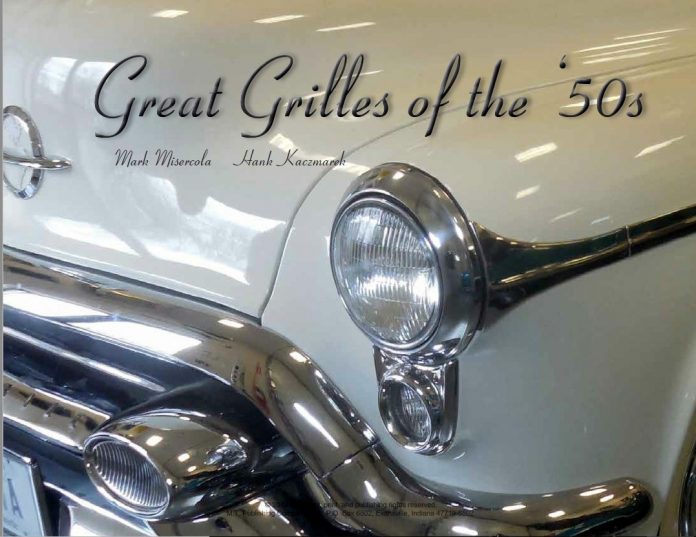 Research is the backbone of MyStarCollectorCar’s written material because the collector car hobby is an ongoing education.

The key to this education is finding quality information but in today’s fact-free online world that’s a big order.

Fortunately there are some great sources for automotive information.

I just finished reading Great Grilles Of The ‘50s and it’s a little deceiving  because on the surface it looks like a simple coffee table book with great 50s classics in the pictures. It’s much more than that because the two writers, Mark Misercola and Hank Kazmerak are veterans of the car hobby and they’ve put together a concise and entertaining look at iconic grilles from the 1950s.

They cover some well-known names from the 50s like the Edsel but they plunge deeper into the subject matter than most writers do. For example, the ‘horse collar’ nickname on the Edsel grille was derived not only from its obvious appearance, but also from a TV western Ford sponsored at the time. There’s also information on why Ford chose Edsel for the name. Spoiler alert – it has a lot less to do with Edsel Ford being the only son of Henry Ford than you might think.

The ’57 Chevy is another well-worn path in automotive history so you wouldn’t think there’s much meat left on the bone but Misercola and Kazmerak mined some great history on this automotive icon. They discovered one of the reasons Ford outsold Chevy in ’57 came down to something very basic – tires. There was an evolution in tire technology and Chevy embraced it while Ford didn’t so they sold more cars. You’ll be surprised at what the new tire tech was because it’s universal now but Chevy paid a price for using it back in ’57.

I’m a huge fan of 50s Exner-era Mopars so I lit up when I saw the ’57 DeSoto and the ’59 Dodge featured in Great Grilles Of The ‘50s. I know Virgil Exner history front to back but I was unaware of his health issues after the debut of the ’57 models. This book touches on how that impacted subsequent years plus it explains how the ’59 Dodge Custom Royal earned the nickname “glitter queen”.

Most older car guys can tell you what ‘Dagmars’ are on 50s bumpers – to the untrained eye the reason is obvious. The historical confusion comes from when Dagmars actually debuted because the date was long before the legendary Hollywood starlet hit the big screen. You’ll find out when because there is a detailed history on this bumper feature in Great Grilles Of The ‘50s — it extends from the debut of the ‘Dagmar’ and it goes into the 60s. It’s entertaining and educational at the same time – that’s a rare feat.

This book is laid out really well. There is a massive amount of technical detail but it doesn’t bog the reader down with mind-numbing boring specs. Instead Misercola and Kazmerak spoon feed you the fun stuff like cubic inches, horsepower and ¼ mile times plus they lay out the paint codes in living color. In other words, they dive into the deep end of the information pool but they give you a life jacket.

My personal favorite was the ‘Fast Facts’ section at the end of each Chapter. You get a concise assessment of the car and the era it came from so in a sense it’s 50s history wrapped around some pretty cool automotive history.

There’s a lot more to Great Grilles From The 50s than this brief description – I’m a student of 50s iron but I learned new things about this incredible automotive era from this book plus it was a fun read.