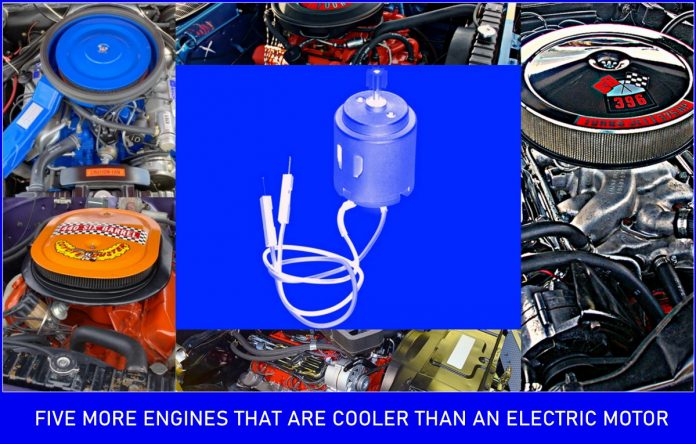 Green cultists and self-proclaimed experts sing the praises of the electric motor as the wave of the future.

MyStarCollectorCar ran a feature back in October 2020 that celebrated five of the coolest gas engines created and produced by the fine people in Motor City. The only issue with our list was its smallish number (5) of very cool engines that produce endless internal combustion explosions via fossil fuels.

Therefore, we decided to add another five engines that are much cooler than a giant version of an electric toothbrush motor. Internal combustion engines produce more cool hellfire and brimstone special effects in one city block than any action movie in history, but we don’t see these explosions unless a piston gets blown through a cylinder wall.

Nevertheless, there is plenty of action taking place under the hood, even it is limited to sweet music from the tailpipes in most cases. Our mission is to add more members to the internal combustion engine Hall of Fame and drown out the white noise from cult members of the fact-free fan club for electric motors.

The first addition to our second list of ultra-cool gas engines is the Buick 455 big block built during the early 1970s. 1970 marked the birth of this monster engine in the Buick GSX, a surprising addition to the muscle car legends from that era.

The 455-equipped Buick GSX became an instant track and street legend when it debuted in 1970 because it surrendered zero ground to Detroit’s more famous road rockets at the time. A few tables have likely been overturned by car guys arguing about the fastest road rocket because a 1970 GSX ran with the big dogs. Every time.

The second addition to our better-than-electric list is the famous 340 small block from Mopar. The 340 was a perfect blend of performance, light weight, and brute force during its heyday from 1968-71, right up until it was neutered in 1972 by overzealous lawmakers.

The 340 ambushed many of its big block street enemies because it was the perfect engine for compact Mopar A-Bodies in terms of weight-to-power automotive engineering. The legend of the Chrysler 340 is still a popular car guy topic in 2021. We at MyStarCollectorCar seriously doubt whether a Tesla engine will even be worthy of thought in car guy circles.

The third very cool addition to the MyStarCollectorCar list is Ford’s 429 engine in its killer performance versions. The 429’s short list included the Cobra Jet and the beefier Super Cobra Jet, plus the insane Boss 429 version. All three of them were built to seek and destroy the competition with extreme prejudice.

The 429 in race form was a pivotal part of Ford’s success both and off the track during the late 1960s, a fact that strengthened the company’s sterling reputation as a performance internal combustion engine builder for the ages.

The fourth member of our MyStarCollectorCar famous gas engine group is the mighty Chevy 396 built by General Motors for their popular Bowtie models. The 396 initially made its appearance with an L78 high performance option in the 1965 Corvette and full-size ‘65 Impala, but this muscular 396 L78 version was limited to Chevelle and El Camino by ’66, and later included the ’67 Camaro, as well as the ’68 Nova.

Chevy’s 396 was understated menace under the hood and garnered a reputation as a worthy opponent in the muscle car wars during its tour of duty as a street warrior.

The fifth and final addition to our list of engines without excessive voltage is the 440 6-pack from the Mopar team. The 440 big-block was already labeled a brute force slugger, but a 440 6-pack version was designed to run over the competition on the way to the front of the muscle car pack when it debuted in 1969. There was no mercy rule in this 440’s list of options.