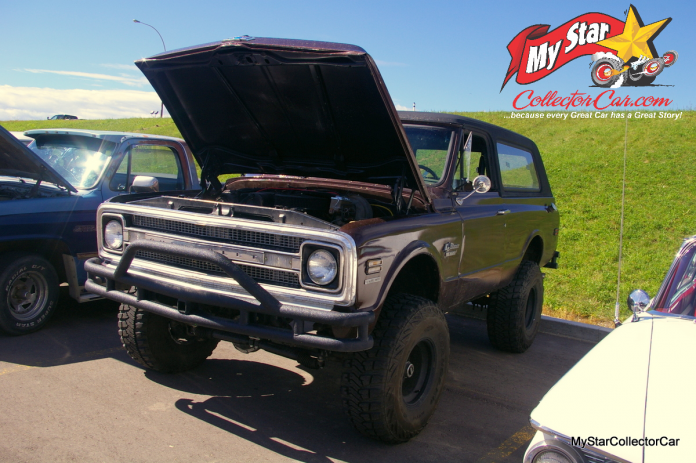 Chris Hoyle has some very fond memories of his 1970 Chevy Blazer K-10 because his grandfather was the last owner.

Chris recalled one adventure in the truck when his granddad took him along on an off-road hunting trip that included crossing a creek and scaling a large hill in the Blazer. The route got more difficult along the way and included 50 feet of driving followed by 50 feet of winching to get to areas where there were plenty of animals and no people.

Except for a guide and a couple of hunters who were thoroughly unimpressed with other people (including Chris and his granddad) in the wilderness and let their guide know in no uncertain terms about their unhappiness.

The childhood memories of his grandad behind the wheel of the Blazer stayed with Chris and he seized an opportunity to become its latest owner and ensure the 50-year-old sport utility vehicle stayed in his family.

The Blazer had been parked since the late 1990s (or early 2000s), according to Chris, so it required work to bring it back onto the road. Chris decided to add some improvements to his grandfather’s Blazer, including some powertrain changes.

The Blazer now boasts a 383 stroker engine that delivers plenty of power to the upgraded four-wheel drive system in the truck. It also has power steering and power brakes that now include disc brakes on all four wheels after the process.

The front-drive unit in the Blazer was upgraded for better efficiency, plus it was a friendlier system for the front disc brake system.

Chris jacked up the ride height in the Blazer, although he believes his late grandfather would likely have some trouble climbing into the modified truck due to his short stature.

The truck’s interior has been redone, including new material for the seats in the Blazer.

The most important part of the process for Chris is actually pretty simple because he loves to drive the Blazer at every opportunity. He is comfortable behind the Blazer’s steering wheel and told MyStarCollectorCar a 110-115 km/h (about 70 mph) highway pace is “quite doable” in his opinion.

Nevertheless, Chris is a realist and admits his Blazer had to be “sent home via a tow truck” on a few occasions during the learning curve.

There have been many modifications done to the 1970 Blazer K-5 since its days with its former owner. One of the mods is symbolic because the Blazer is now named Charlie in honor of Chris’s late grandfather.

It seems like an appropriate name to us here at MyStarCollectorCar.