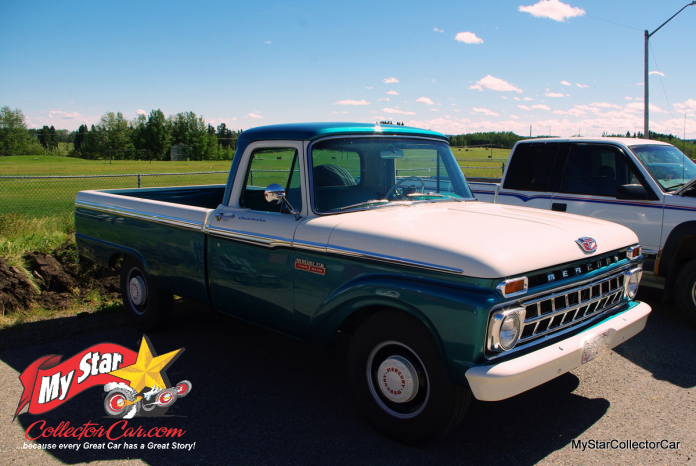 Most old farm trucks fade (or rust) away after they retire – gone but not forgotten every time you drive by the back-quarter section and see it parked by the fence.

The Merc was a working farm truck and it was owned by Dan Kadyk’s wife’s grandfather. Dan picked it up in 2009 because he loved the truck and the family history behind it. Dan drove it for a few years just to get a feel for the Merc and map out a game plan for the truck.

Dan had a mixed vision for the truck because he wanted to add details to it that gave him a personal connection to the project. He’s a hardcore Ford guy so this would be a Ford factory-correct option list with a few minor tweaks over 5-6 years.

The Merc was a basic ¾ ton working farm vehicle, so it came with a 4-speed transmission and no radio. There’s a 352 V-8 (top half rebuilt) under the hood and that’s about it for the option list. Dan decided to go with a more upscale look to the truck, so he ditched the original paint for a two-tone job plus he upgraded the trim and detailed the badges on the truck. He did ditch the West Coast mirrors in favor of custom mirrors, but he’s considering a return to something similar because the “visibility when driving is pretty rough”.

Dan stuck to the factory look on the bumpers, so the front bumper is white, and the rear bumper is grey – chrome was rarely (if ever) seen on the bumpers of Canadian farm trucks. He also overruled a suggestion to use box-liner in the truck bed. Instead, he insisted on repairs to the bed so it would retain a factory look. The tailgate was another issue, so the top half is pure Mercury and the bottom half is pure Ford donor truck.

The truck will have a Mercury truck trailer behind it to haul Dan’s vintage Honda motorcycle behind it so the combination will definitely be a one-off at every car show.

The split rims were another casualty on the Merc because they are so dangerous most shops won’t work on them. Dan opted for a two-tone, split rim-like wheel to showcase the mint Mercury hubcaps on the truck. Dan found them in a shed at the farm and three out of four were in great shape – now they look factory fresh. His only concern is how scarce they are, so he worries about theft – so much that he’s tried, without success, to find backup hubcaps. There are several hand-stenciled decals on the truck because Dan loves taking care of details.

This is a truck with a 4:52 rear end so it’s really working hard at 60 miles per hour. Dan’s connection to the truck was magnified when his wife’s grandmother was along for some shows and parades. She spent a lot of time behind the wheel of the truck because she was a farm wife. Dan said she, “had a bull do a 180 in the back when she was hauling him” back in the day.

She wanted to drive the truck, but Dan wasn’t crazy about that idea, so he let her “ride in the truck and wave at people like she was the Queen”. She lived long enough to see her old Merc win a trophy and that was a huge day for her.