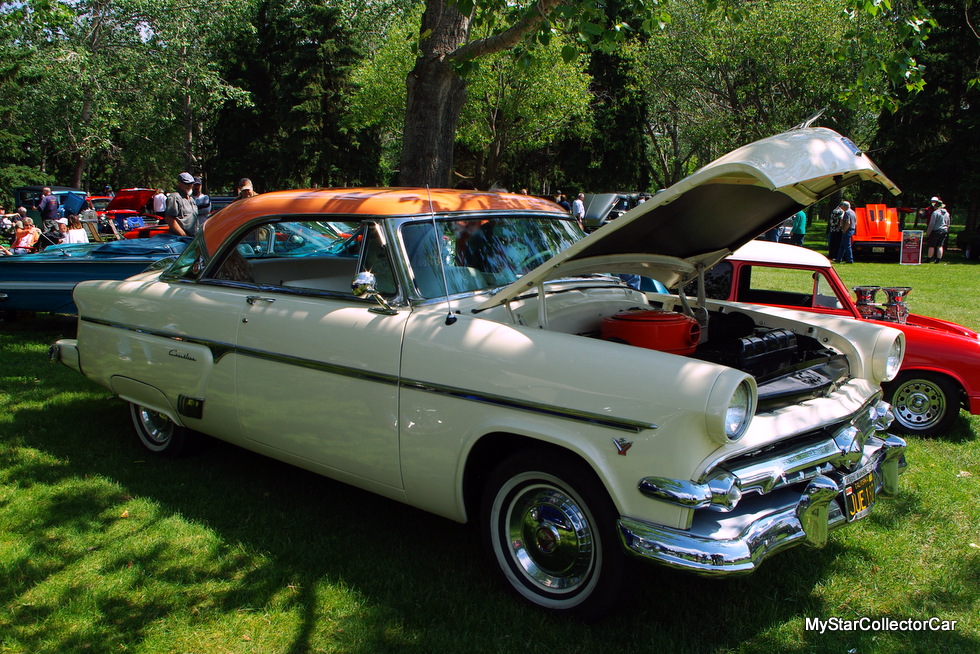 Not many look behind a motel. 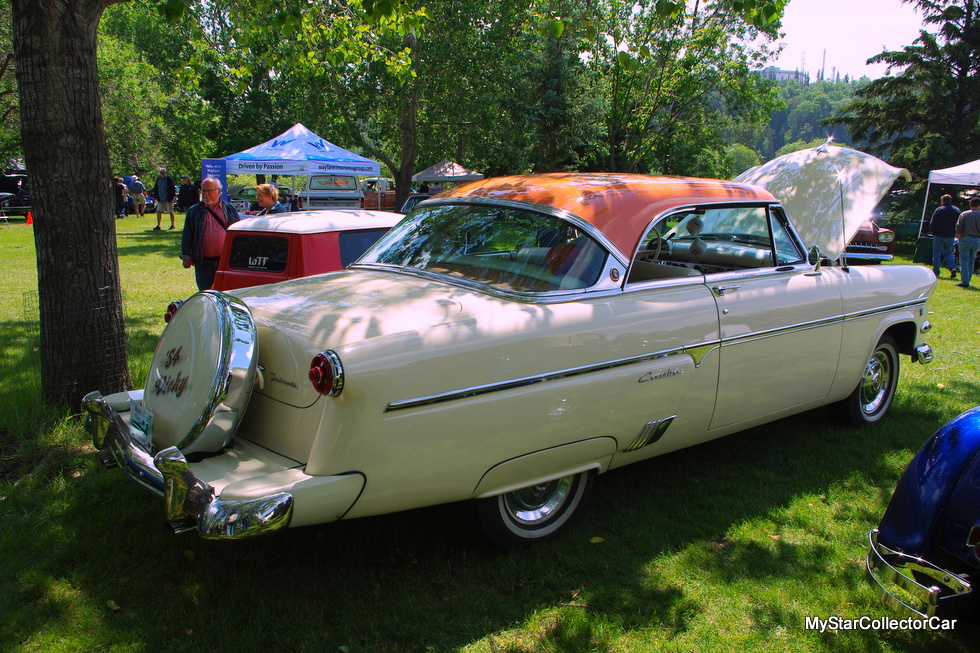 Gary Carter did look behind a motel and in 1989 he found a 1954 Ford Crestline Victoria two-door hardtop with California plates that had been sitting there for several months.  The tires were flat but Gary said it “was all there” so he talked to the motel owner. 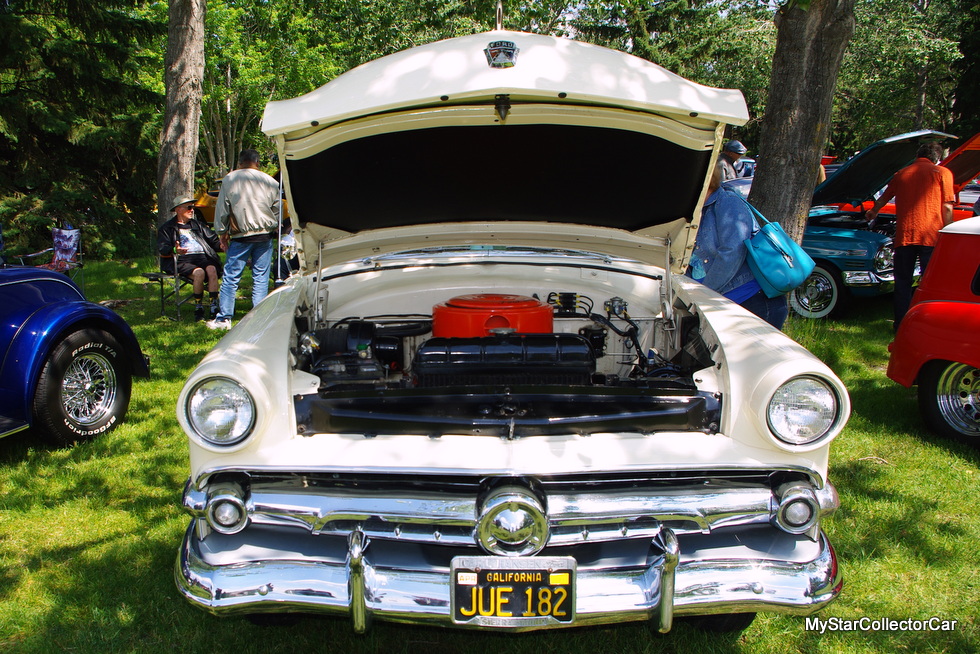 The owner said he thought the guy was going through a divorce so Gary left his phone number and “the guy called back” and it turned out the car was for sale.  He told Gary to “bring an air pump and a can of gas”.

Gary was amazed with the car’s condition—it was a full-load car so it had power seats, power windows, power brakes, power steering and the Ford-O-Matic automatic transmission. The original owner had definitely ticked off all the boxes on the order list. The only thing that doesn’t work is the factory clock but this is remarkably well-preserved  ’54 Crestline. 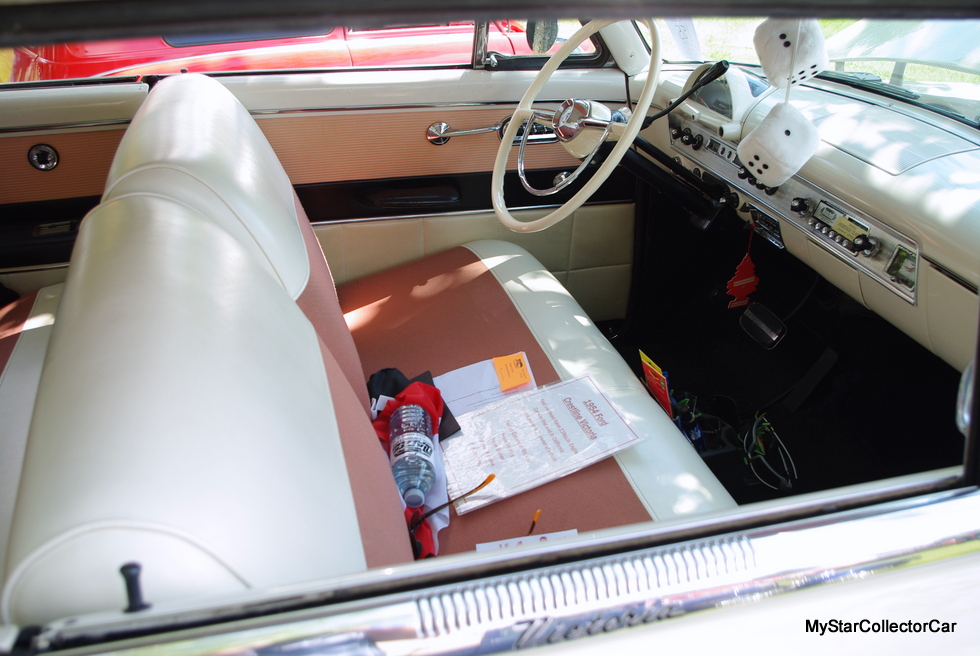 The 1954 Ford was the first year for the new OHV 239-cubic-inch V-8 after many years with the legendary flathead so that was also a big factor for Gary’s interest in the Crestline Victoria. This car bridged the gap between the new tech of the post-war era and the 30s tech of the flathead era.  The other thing was its California heritage because he found this old Ford was a completely rust-free car. 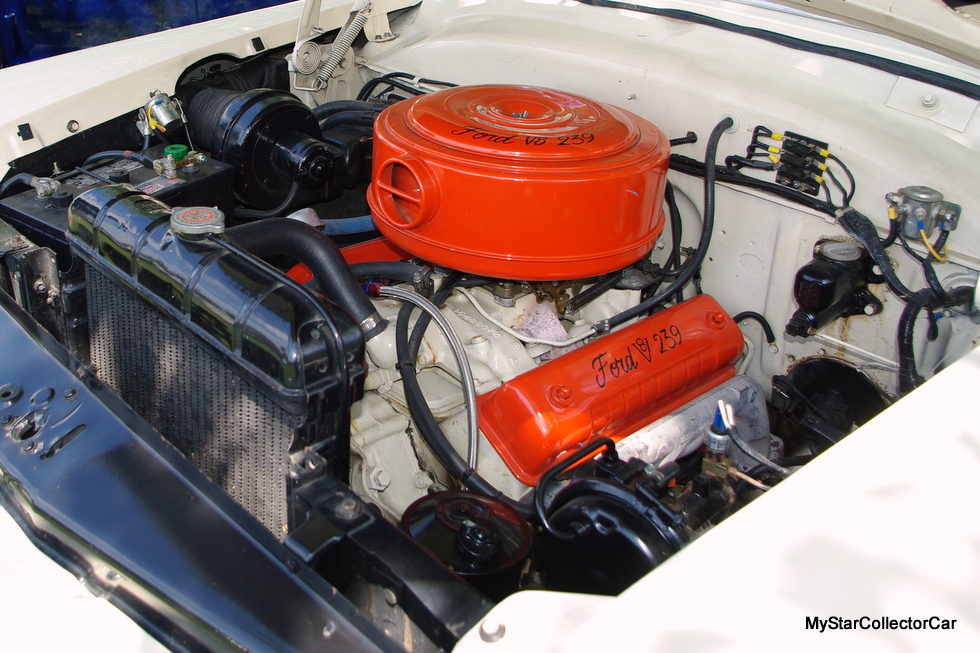 The interior was in pretty good shape (cloth was gone) and the body was solid with the exception of a replacement driver’s side fender. Gary took on the paint job and the car still looks great many years later so he’s enjoyed solid miles behind the wheel of the ’54 Ford.  The only other upgrade was a 6-volt battery that—in Gary’s words—“puts out as much as a 6-volt can because of all the electrical options” so he didn’t want to skimp. 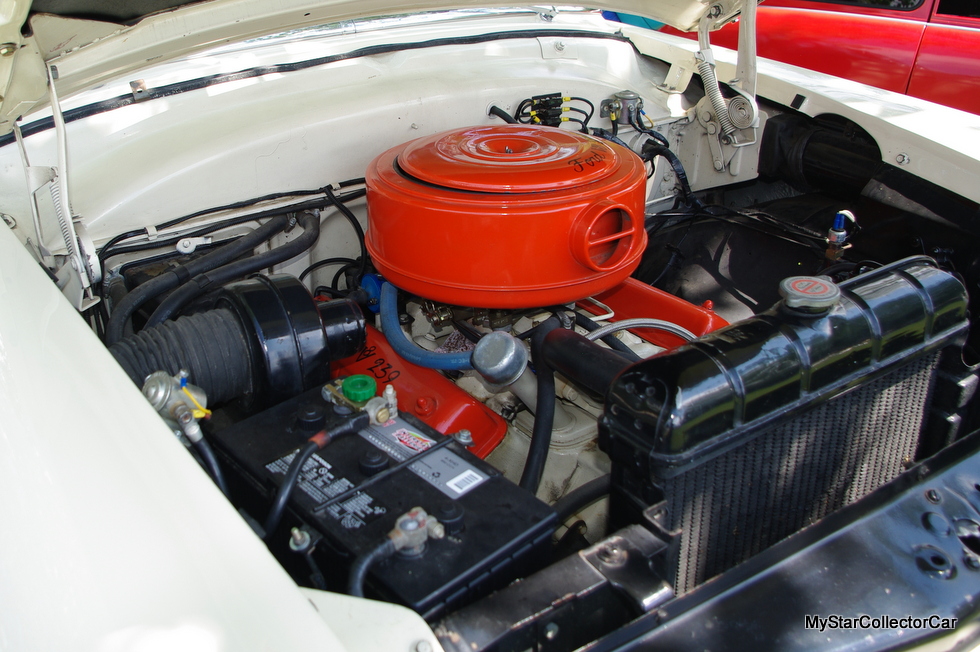 Gary wanted his ’54 Ford to have a few period-correct custom touches so he added a Continental Kit to the rear bumper. He also added fender skirts and dual exhausts to complete the look from the 1950s. There’s little doubt many of these Ford Crestlines were done up the same way in an era when Elvis Presley was an up and coming singer. 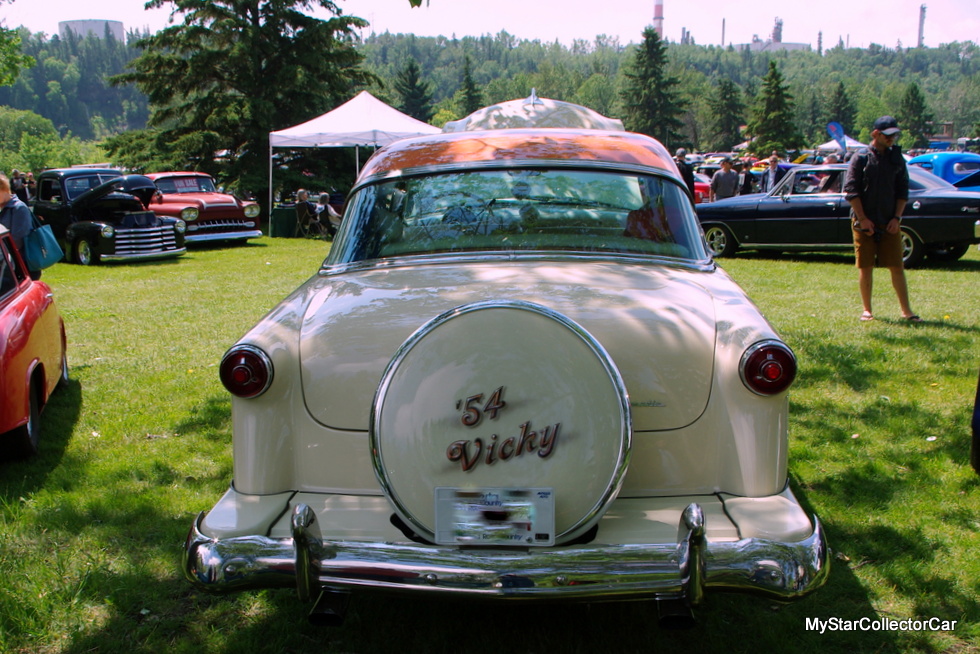 The car was an original 63,000-mile car back in a 1989 and it sits at 88,000 miles today so Gary exercises the Crestline enough to protect it from the ravages of long periods of hibernation. Gary said it’s “great to drive although it was pretty rough until the radial tires” but now he said the new tires and power steering make it very comfortable on the highway. Gary runs it at 65-70 miles per hour but he said “it’ll do 90” pretty easily. 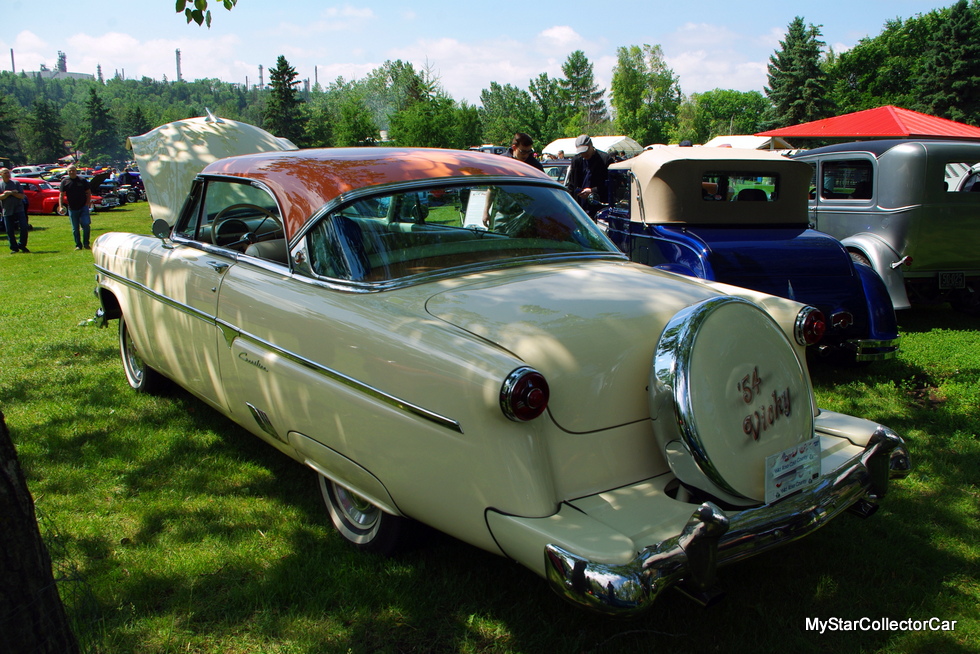 Gary owns other cars but this ’54 Ford is his favorite because it was the car that drew him into the hobby after his buddy introduced him to the car culture. 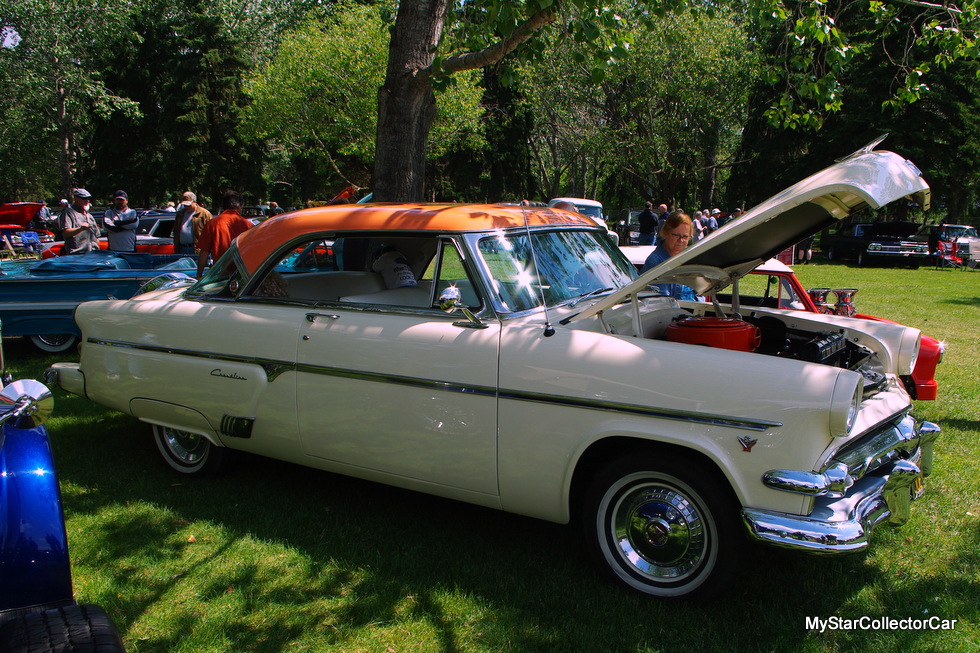 This Crestline is not a bad way to enter the hobby—even if it was parked behind a motel.