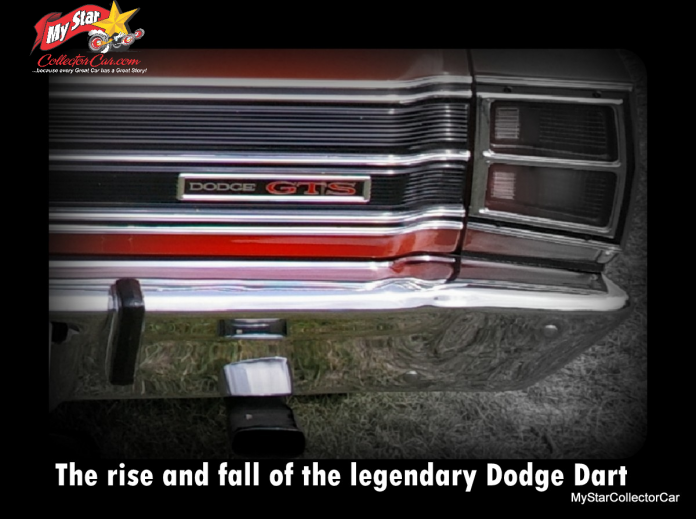 Dodge Dart is an iconic name in the car hobby because of its association with the fast, nimble, and cool Dodge Darts built during the late 1960s and early 1970s.

We at MyStarCollectorCar have chosen not to focus on the 21st century version of the Dodge Dart, given that it captured the imagination of exactly zero car guys during its short-lived revival as a forgettable four-banger built with delusions of grandeur by Mother Mopar.

Instead we decided to pinpoint the legacy of the Dodge Dart during its production run as a front engine/rear drive car that evolved into a capable street warrior by the late 1960s.

The Dodge Dart was introduced as an intermediate-sized car in 1960 because Dodge wanted a standalone model that could replace Plymouth at Dodge dealerships after Chrysler split the two divisions into separate entities. The direct result of the decision was zero combined Dodge/ Plymouth dealerships, necessitating the debut of the Dart.

Chrysler moved heavily into the unibody (combined body and subframe instead of a full frame bolted to a car’s body) phase with most of its car models in 1960-and the new Darts followed this trend. The cars rode on a 118-inch wheelbase, while the smaller Lancer compact Dodge models had a 106 ½-inch wheelbase.

The famous Lancer name would eventually get run over by the Dart name in the Dodge compact lineup, a move that started by the dawn of the 1963 model year. The Dodge Dart was subsequently heavily associated with Chrysler’s compact car marque by 1963.

Dart turned the corner (presumably at high speed) when it became available in V-8 versions by 1963. The feisty 273 cubic inch small block was an excellent addition to power options for the ’63 Dart compact and launched a movement toward go-fast in the Mopar compact.

One of the rarest Dodge Darts was its 1965 Dart Charger model built in extremely limited numbers that year. The Dart Charger was only offered in body color (light yellow) with a black vinyl roof or convertible top. This particular ’65 Dart housed a lively 4-barrel 273 cubic-inch engine under its hood and is now a rare, expensive Bigfoot-like legend within the car hobby because it was a one-year-only model.

The most famous Dodge Darts were the road rockets wrapped in a small package built during the muscle car era. The 1967 Dodge GTS models offered 340 cubic-inch small block and 383 big block options that guaranteed owners would have a close relationship with their tire guys after melting the rear tires on these compact beasts on a regular basis.

The Dart GTS name headed for the exit by 1970 and was replaced by the Swinger name on Dodge’s performance coupes. The 383 (and ultra-rare 440) GTS engine option also bit the dust by 1970, but the lively 340 small block was still a solid choice for Dart Swinger customers in ’70.

Eventually, the Dart fell victim to heavy-handed federal regulations that strangled the life out of performance and forced Chrysler to market the car as a neutered, mild-mannered sedan with a reputation for reliability and blandness.