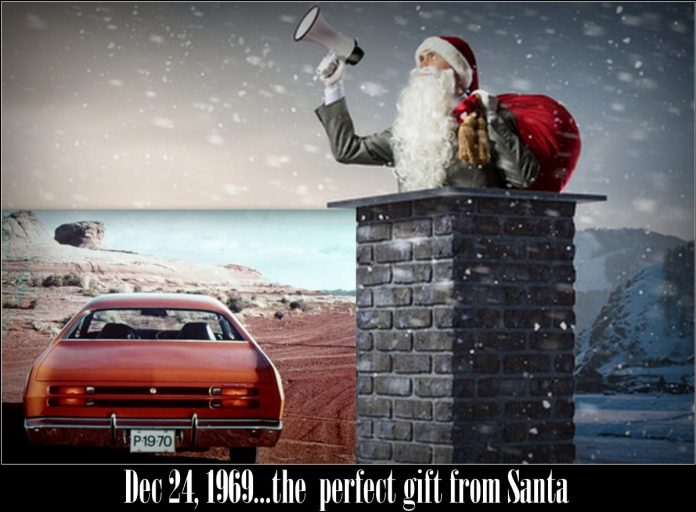 It’s Christmas Eve 1969 and you’re a 16-year-old kid with a freshly minted driver’s license, so what’s on your Santa Claus list?

The 1970 Valiant Duster 340 tops the list. Before you cats jump all over that suggestion, here are five reasons why Santa would leave a Duster in the driveway instead of a Superbird or 427 Vette.

The first reason is cost because Santa works on a budget. If history tells us anything it’s this–Detroit wanted younger buyers in their showrooms, so the prices had to reflect the spending power in the coveted 18-25 demographic.

The ’68 Road Runner cracked the 3000-dollar barrier with a stripped-down, no-option sedan with off-the-shelf parts and a big block as standard equipment. The 1970 Duster was aimed at the same target market so that’s why a 16-year-old kid would be a hero behind the wheel of this classic piece of Mopar muscle

The price tag on the 340 Duster reflected the era. 1970 was a pivotal year because insurance companies and governments started taking a deep interest in cars with massive engines and thus the Valiant Duster was born–a road rocket with a 2900-dollar price tag. It was Plymouth’s 1970 answer to the incredible success of the 1968 Road Runner

The second reason was the lightweight A-body Valiant platform because it was lighter than a Vette (3105 pounds with a 340 compared to the 3285-pound 1970 Corvette). This was a bulletproof combination–in 1971 Duster would lose the Valiant name, but it didn’t lose the Valiant bones.

The third reason was the 340 small block. This was basically an offshoot of the 318, but the 340 was bored-out; it had higher compression and it breathed better through the heads, so it cranked out an alleged 275 horsepower, but most insiders knew it was at least 325 horsepower.

Those numbers put the Duster in the sweet spot. The 340 cubic inch V-8 didn’t get on the insurance companies’ radar but it was capable of pulverizing big blocks on the street with its thumping power to weight ratio.

The fourth reason was the 340’s amazing performance. Dusters were an honest 14-second car at the track with a 0-60 time in just a shade over 6 seconds and a 124 miles per hour top end with the 3:23 standard rear end.

The fifth and final reason is the stealth look of the 340 Duster. It’s pure Valiant at the front end, so it’s a sleeper to most observers–that’s a big help when you’re a sixteen-year-old trying to fly under the radar with law enforcement. All they see is a Valiant in the rear view mirror.

OCTOBER 17, 2013: THE PAINFUL WITHDRAWAL PROCESS FROM A LONG SEASON...