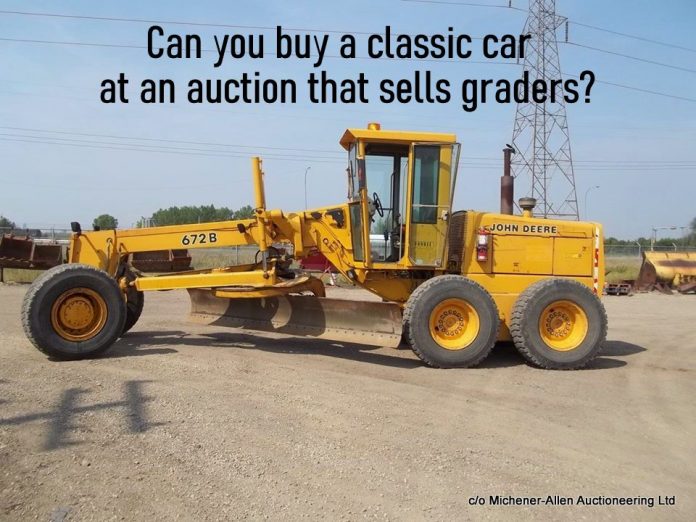 Most car guys are big fans of the flashy TV collector car auctions because they are an excellent antidote to long, cold winters without car shows.

Michener-Allen Auction is a large automotive and industrial auction company based out of Western Canada and they are well known for their big regular sales but they also run classic iron through these auctions. Bob Knutson is the General Sales Manager for Michener-Allen (Edmonton and Northern Alberta) and he explained how these collector vehicles end up in their regular auctions.

Bob said, “It’s mostly about timing because some guys can’t wait until our collector car auction in July – that’s too late for them. Or they don’t want to take them to Calgary so they’ll sell them through one of our other auctions closer to home—we sell about 20 per year”.

These auctions routinely attract between 2-4000 people so there are a number of potential buyers; even though most of them are there for the fleet auctions, graders and other heavy-duty equipment. Bob said a number of these “simply impulse buys”.

Bob had a great example of how this type of sale plays out at a regular auction. He said there was a “young guy from out of province at a recent auction – he was working out here in Alberta and he spotted a 1978 Anniversary Edition Corvette. His dad was a car guy so he bid on it and he ended up buying it because it went for $11,000. He shipped it right home”.

This heavily modified 1958 Chevrolet Fleetside sold at Michener Allen Auction for 49,000 in March, 2017.

This 1963 Studebaker Avanti sold for 3,600 at an October 2016 Michener Allen auction in what could be called a deal of the year.

Michener-Allen is justifiably proud of their 21st Annual Collector Car Auction –it comes up on Saturday, July 25, 2020 in Calgary, Alberta, Canada. They have a lot of fun with that auction because it’s a big change from selling things like gravel trucks plus the Michener-Allen employees are hardcore car guys.

Their collector car auction is a big date on their calendar but over the course of every year, the Michener-Allen gearheads get to see some pretty cool classic iron cross the regular auction blocks.

It keeps them happy until the big auction in July.