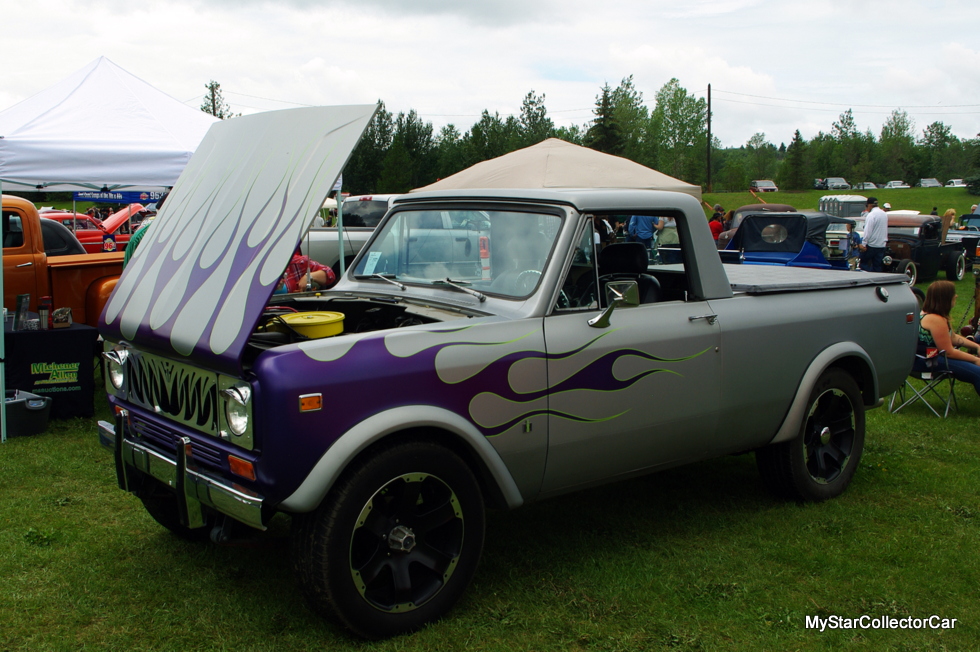 There are two paths we can take as owners of a vehicle.

‘We can either treat them as purely functional, maintain them to the best of our abilities and cut them loose when something happens because the cost doesn’t justify the repair or we can be a lot more committed to our mechanical friends.’

This ’78 Scout II has a committed owner. 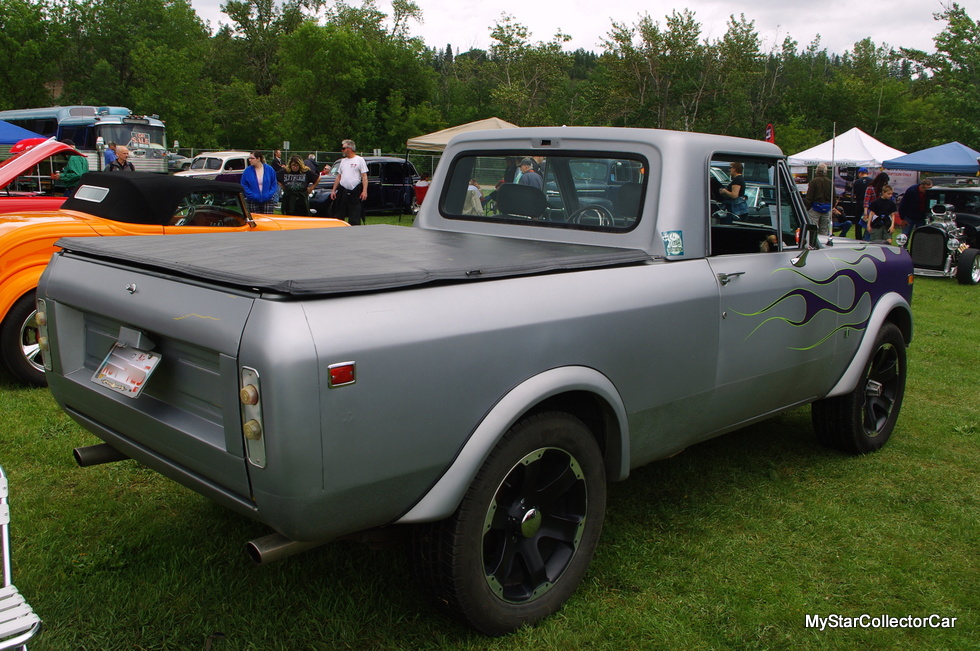 Nadine Evanoff and her husband were in the hunt for “something different” 18 years ago when they found a 1978 IHC Scout II. Nadine’s husband Greg was looking for a GMC Jimmy but he found this Scout and a deal was cut. 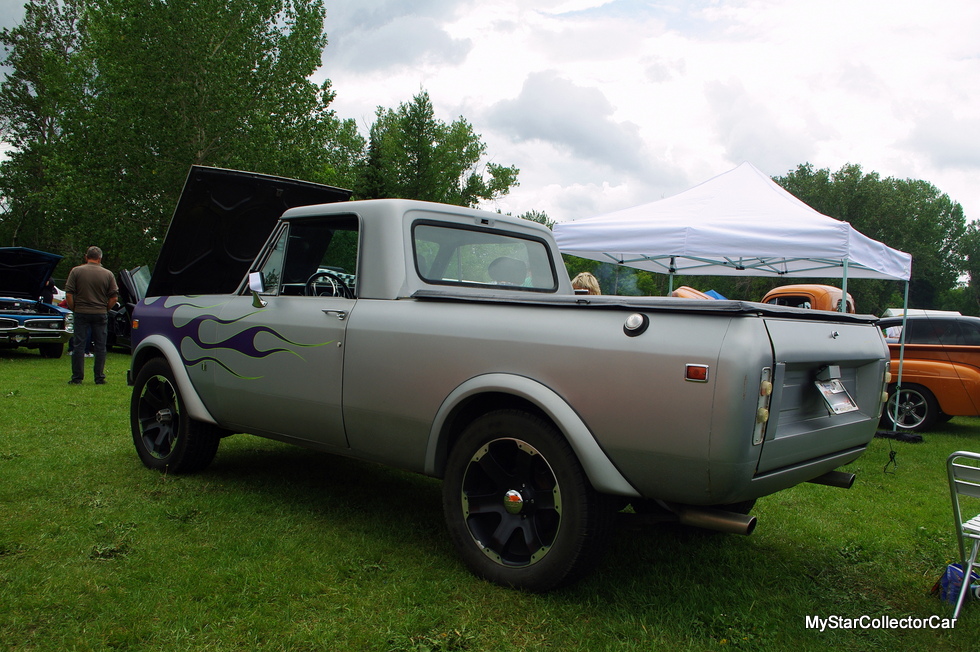 Nadine drove the Scout back and that was the start of a long and committed relationship. The Scout ended up with a non-stock yellow paint job with purple flames and it stayed that way for years until the “rust started creeping through the paint”.

They painted the Scout silver and fixed some of the rust and carried on in their trusty IHC. Nadine turned the Scout into a semi-regular driver and added a few adventures to her personal history with the little IHC. 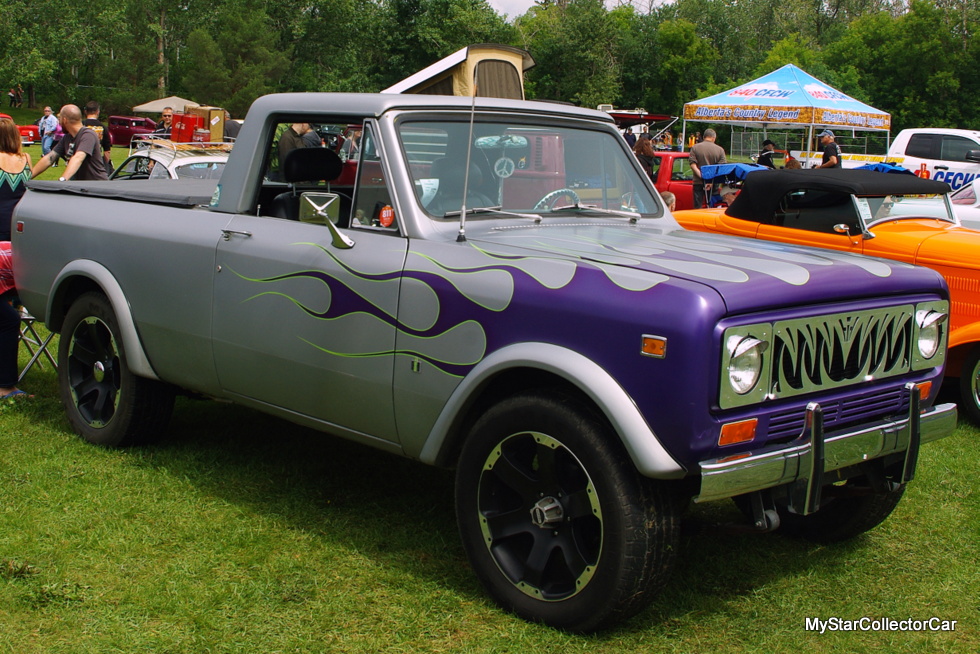 She recalled how she was on a road trip to Yorkton, Saskatchewan when the Scout II ran out of gas in the middle of nowhere. Luck was clearly on her side because she stopped in a yard where a guy worked on boats and he had some gas to get he going again. 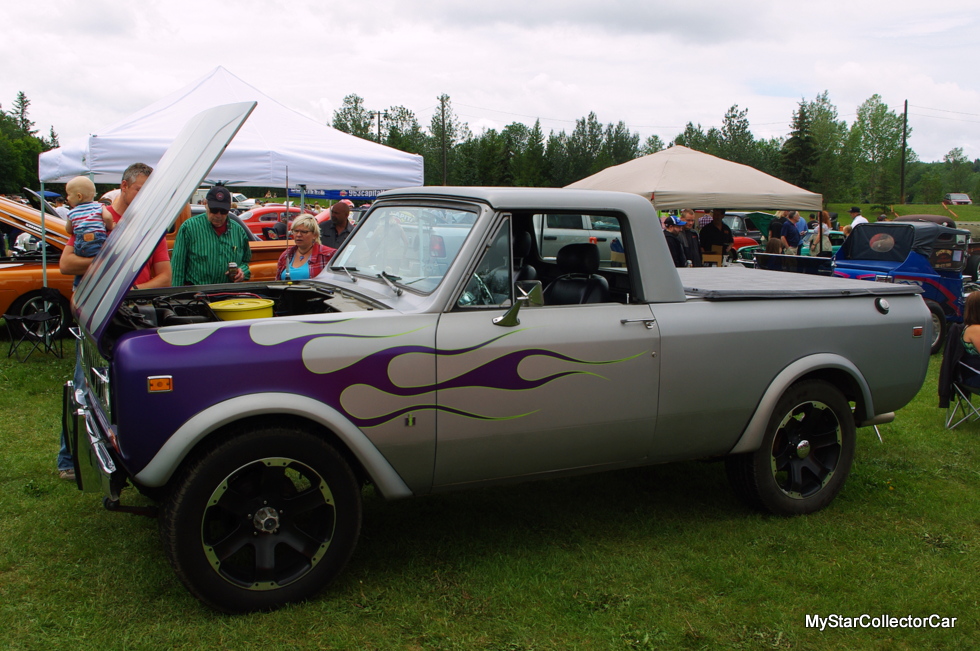 Nadine said “all her belts broke” just outside of Saskatoon, Saskatchewan but she “drove into this guy’s yard and it turned out he was a mechanic. He tried out all his belts but none of them fit”. The problem was solved when the right belts were delivered and even though the motor “overheated fast” but no damage was done. 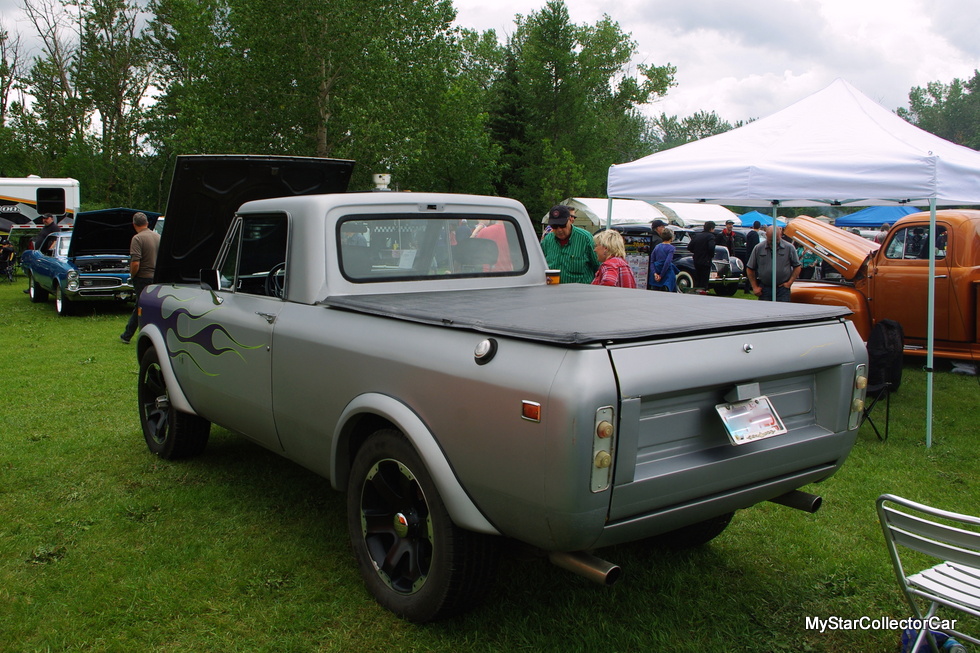 This Scout II is the definition of a summer driver because Nadine drives the little SUV whenever she can so she “tries to bike to work” but if she can drive her beloved Scout to work, she seizes the opportunity. She does this despite the reality that her 304 V-8 only delivers about 7 miles per gallon so the fun factor does come with a price tag but Nadine sees the drive as therapeutic because she’s a full time nurse. 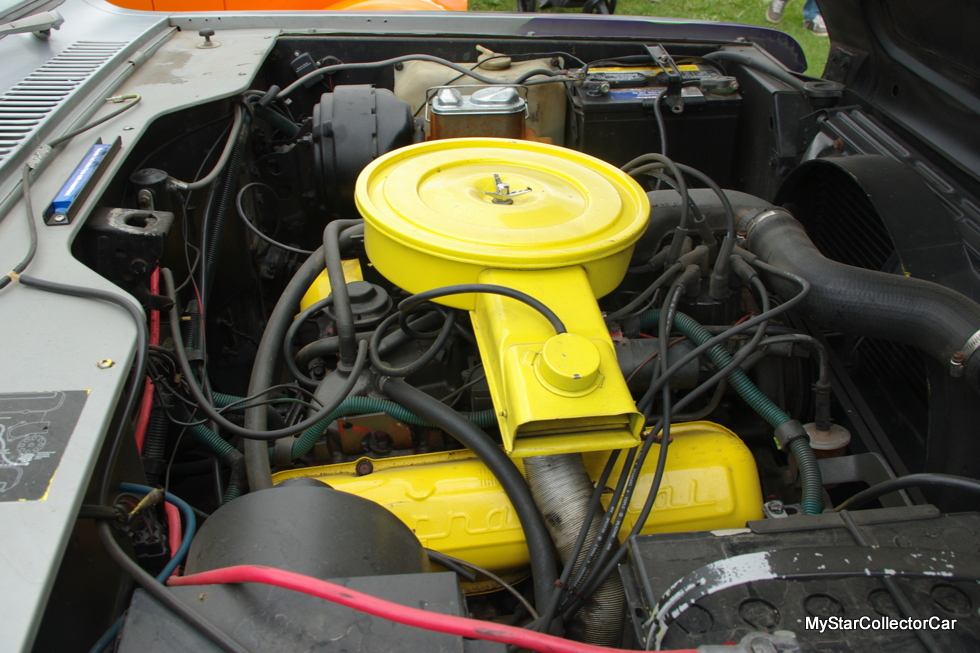 Nadine has a serious attachment to her Scout because she says it “looks like something a 4-year-old would drive—it’s like driving a cartoon”. She’s added personal touches like a Social Distortion decal (her favorite band) and a custom cut front grill (she designed the teeth and Greg added the IH part) and the seats are from a Toyota because she believes: “Why have a vehicle if it’s not going to be personal”. 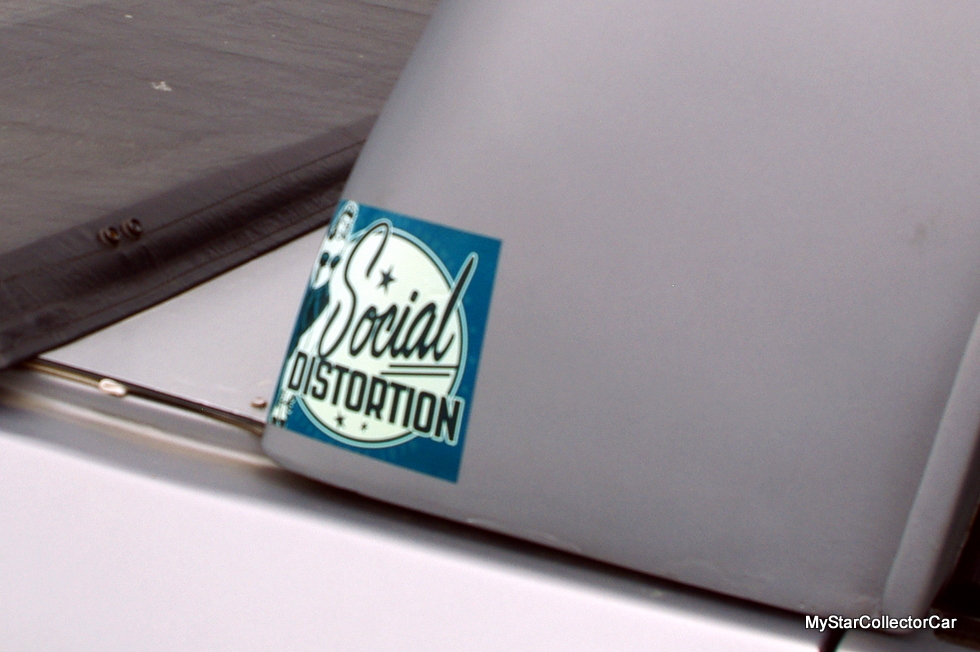 The Evanoffs limit their travel to local shows and IHC gatherings if the destination isn’t too far away but the daily runs are routine so this Scout gets regular exercise. Unfortunately, urban driving comes with a risk and Nadine found out how risky it is at an intersection.

She admits it was “totally her fault” when she ran into a driver at an intersection. The light turned green, the driver stayed in place and Nadine drove into him. She believes he was a new driver and simply exercising caution at a traffic light but that didn’t stop the impact. 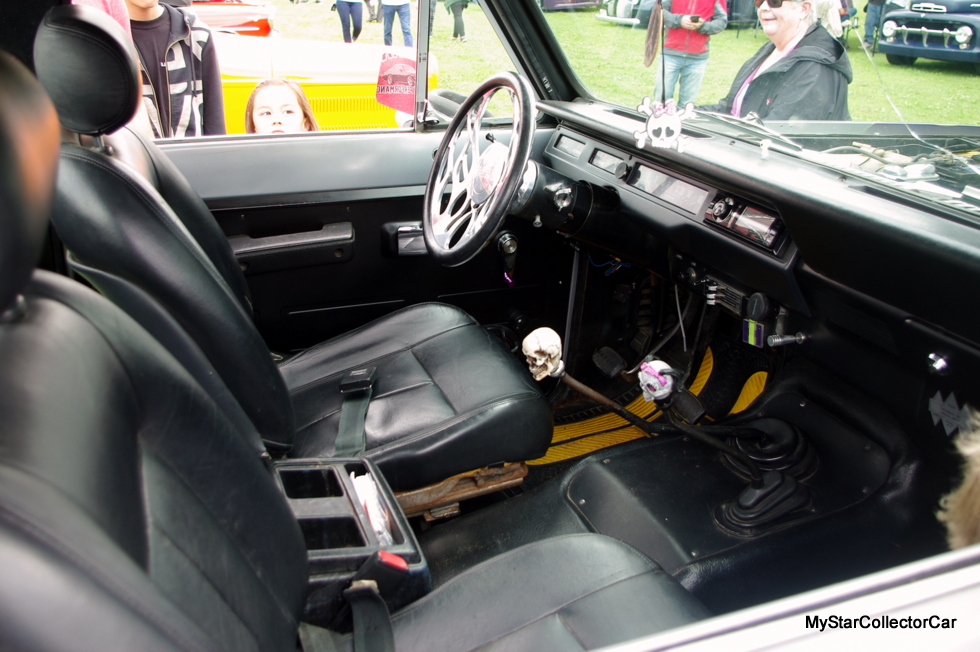 The insurance company wanted to write the Scout off and many owners would have caved in and taken the check but Nadine is no ordinary owner. She had a friend with expertise in the auto body world get involved in her case and he saved it from a grim fate. 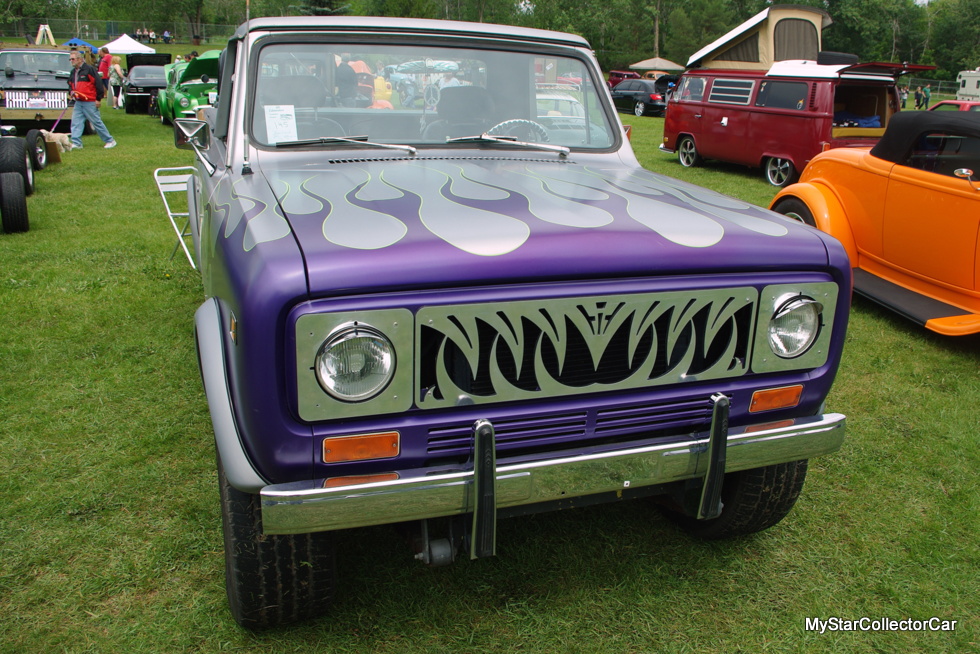 ‘In the end, there’s only one reason this Scout II came back from the dead—total commitment from its owner.’