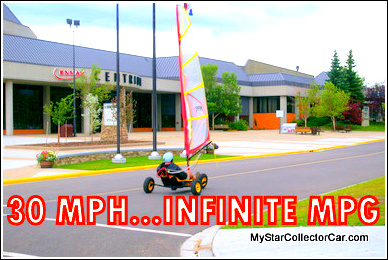 Brian Saby is not exactly a tree-hugger.

At best he has a nodding acquaintance style relationship with plants.

But he likes to challenge himself, so he decided to build a three-wheeled vehicle that would get him a standing ovation at the annual Greenpeace environmental hug-fest.

Brian’s latest set of wheels runs on wind power, three wheels and a sail propel him down the road. Typically we require that a vehicle meet antique status, but Brian is well beyond the 25-year minimum age requirement and his newest set of wheels was built by him, so we bent the rules a little and gave him antique status. 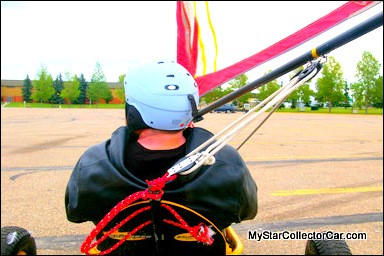 Note that I have known Brian since the hellish 70s disco era and one thing has always been clear: expect the unexpected from this guy.

If you ever had a real life ‘Gilligan’s Island’ situation, you would want this guy as the real life Professor character because he has always been able to figure out innovative ways to make things work easier and better after his intervention. 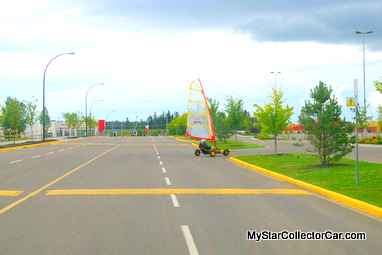 Brian never had any difficulty with the pure sciences, in fact it made it easier for him to graduate from dentistry at the tender age of 23.

But it has always been interesting when he applies his aptitude for physics to the everyday world. Brian has always been able to find a way to use pulleys, wheels and leverage points to their best mechanical advantage. 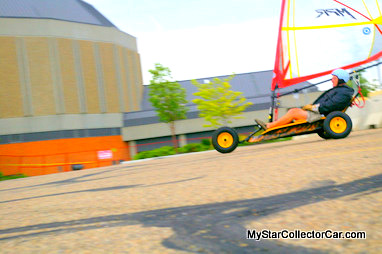 He realizes that a back is a terrible thing to waste on heavy loads as we have gotten older, so he applies what I call that giant Saby brain to practical ways to protect aging spinal columns from harm.

All of his expertise was applied to his Lake Lefroy Land yacht. The Lake Lefroy land yacht is a three-wheeled vehicle created in Australia by a guy with an affordable idea to sail on three wheels. 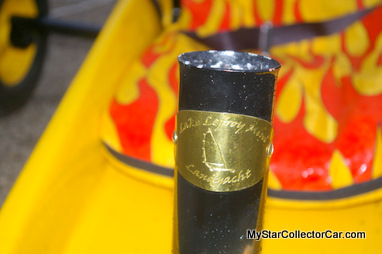 Lake Lefroy is a giant 300 sq mile Australian salt flat that is a perfect place for land sailors to run their rides with no threat of a Wile E Coyote crash into a brick wall.

There are several competitive classes, but the mini-yacht idea was perfect for beginners like Brian. The only hitch was that you have to build your own land yacht. 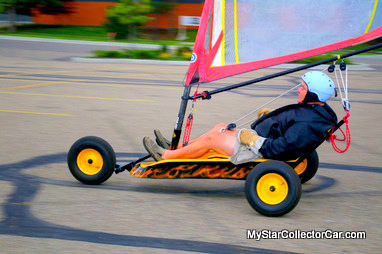 That was not an obstacle to Brian-that was an invitation to a new challenge for him. He likes to push himself into things like a mini land yacht built from scratch.

It required him to learn how to weld, including aluminum, so he used You Tube to hone his skills in this department.

His welding skills needed some serious sharpening from his first efforts a few years back when the congealed masses of metal indicated that his chosen career as a dentist was the right one. 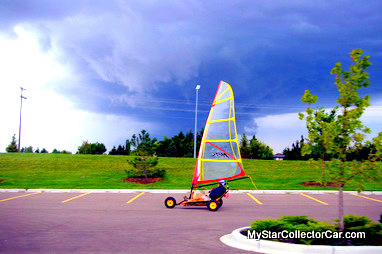 But the welds on his mini- yacht looked like Brian had taken his rig to a local welding shop to get those kinds of beads. It should have surprised me but, after several decades, nothing really surprises me about his ability to master a new skill.

The final test came in the empty Westerner parking lot when Brian showed us how the mini-yacht performed on pavement. The wind gusts pushed him up to 60 mph (100 km/h) as he whipped that rig around the parking lot.

It seemed pretty fast as he sped past us with only a hum from the tires to give him away in an audible sense. Brian knew that he could have gone even faster-except he” kept running out of parking lot”, in his words. 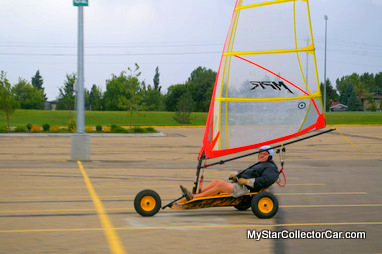 Brian has always had a fearless streak when it comes to these kinds of adventures because he has ultimate control of the speed through the sail. He had less faith in the Fred Flintstone brake on his mini yacht. 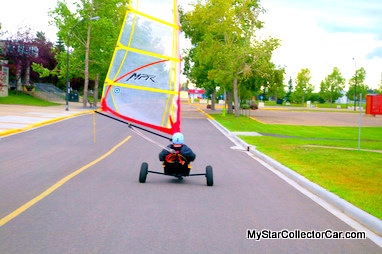 Brian Saby’s newest ride may not be a model for future transportation, but it sure is an interesting way to get around when the wind is right for him.