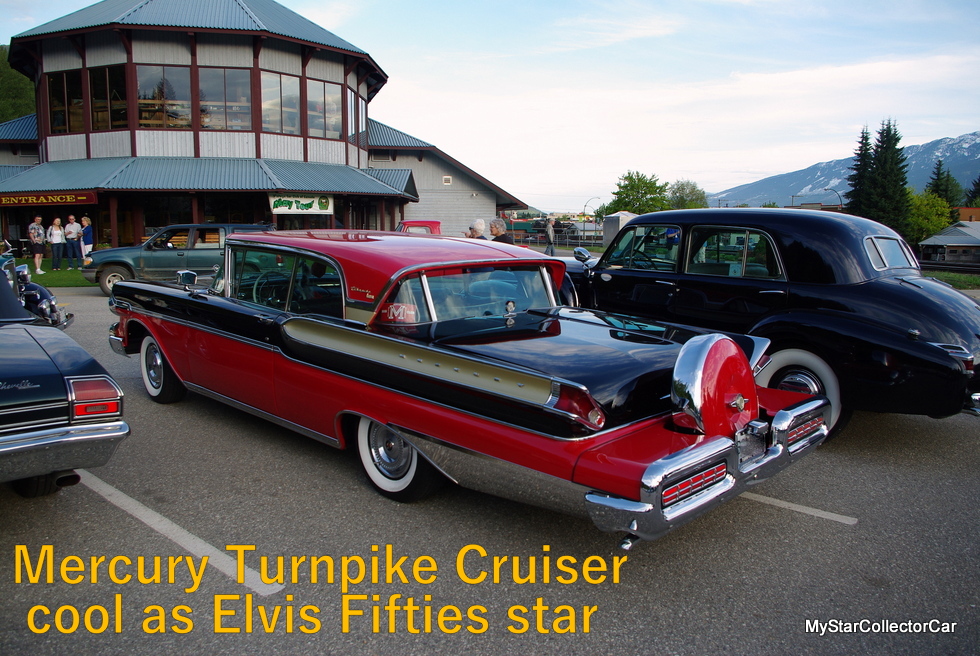 The Fifties was a decade of huge change in the United States.

A shy kid from Memphis named Elvis turned the musical world on its ear when he brought rock and roll to an eager teenage audience in the mid-50s.

Passenger jets took flight in the Fifties and TV became a force during the Eisenhower years. 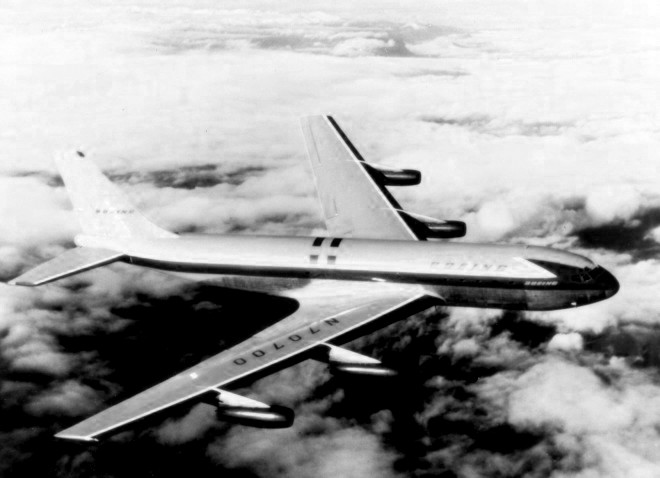 But Ike had his own game plan in 1956 when he signed off on the Dwight D. Eisenhower National System of Interstate and Defense Highways. 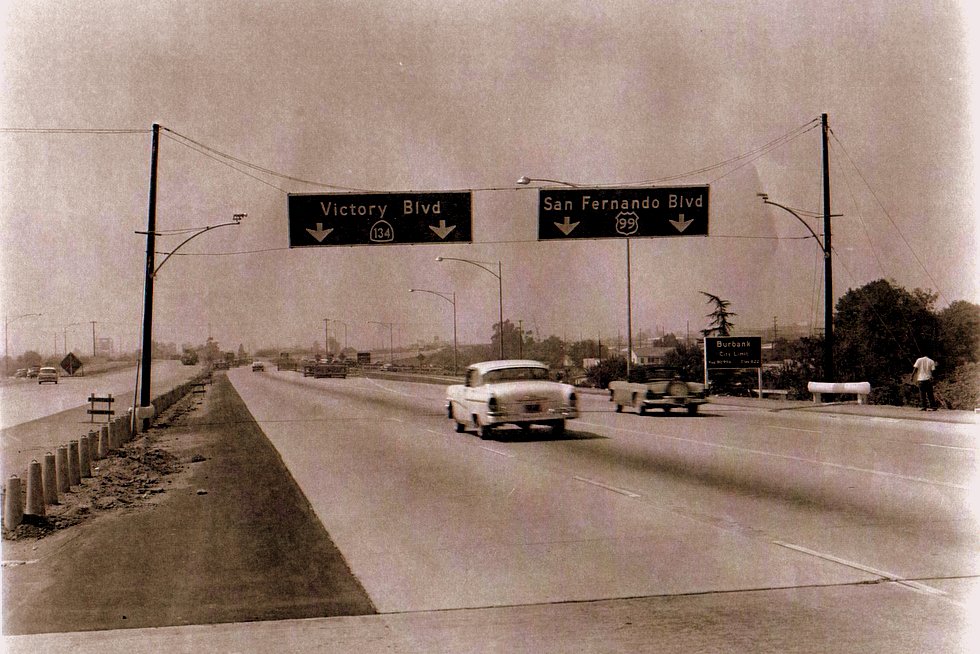 The result was a series of major highways that connected all 48 of the lower states with a more efficient and faster road system. The decision spelled the end of famous highways like Route 66 as a major transportation route, but the new freeway system meant people got there faster and safer because of more driving lanes.

The new interstate system actually took several decades to build and continues to evolve so the roads can theoretically handle greater traffic loads. 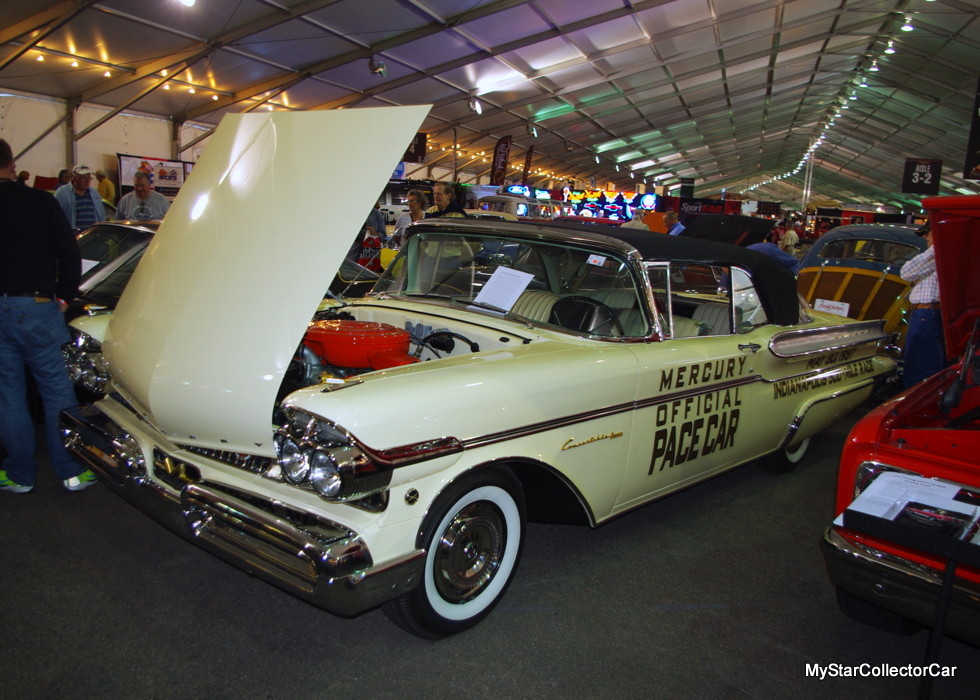 This amazing new highway system was still in its infancy in 1957 when Mercury debuted its Turnpike Cruiser. The term “turnpike” actually dates back to early England when it was used to describe a road toll barrier that was paid before traveler could go any further on the route. 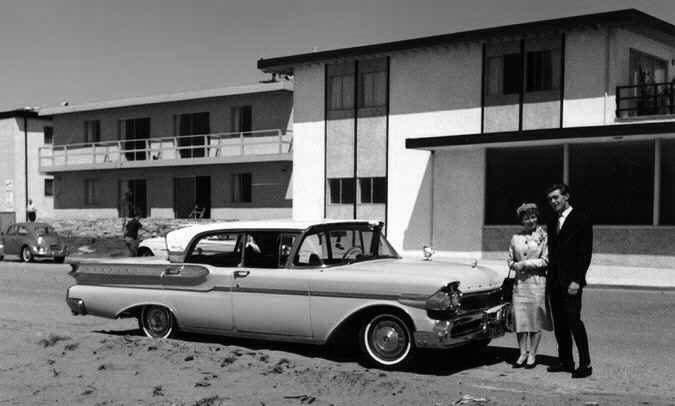 The term “toll booth” is very familiar to drivers on many interstates, so “turnpike” was a natural fit when the 1957 Mercury Turnpike Cruiser traveled down an interstate with a toll booth to help pay for the road. 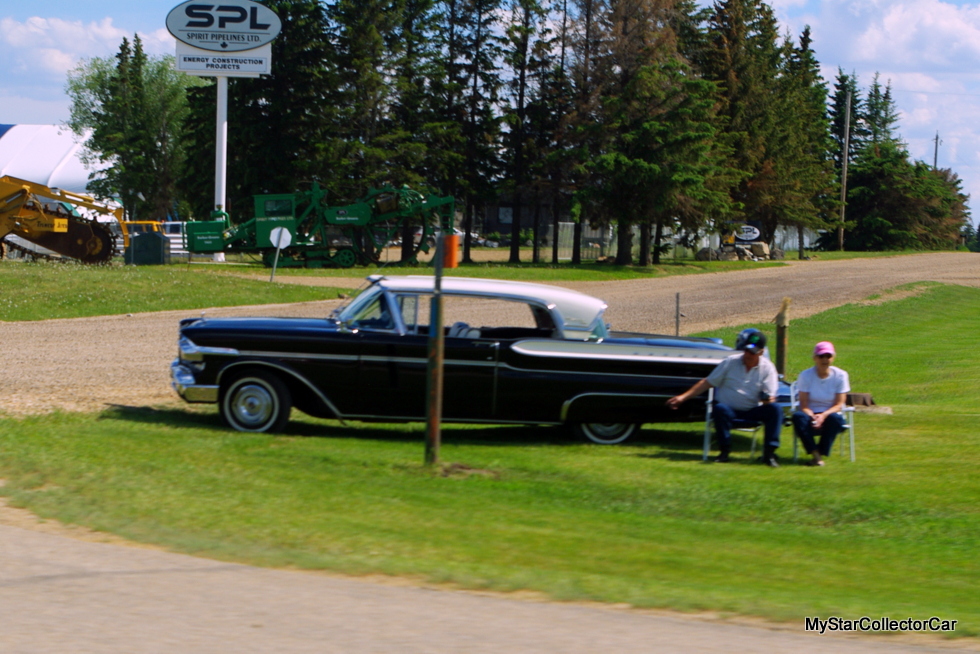 I always loved the name of this famous Mercury model from the late Fifties. The Turnpike Cruiser was only built for two years (1957-58) but it left a lifelong impression on me. 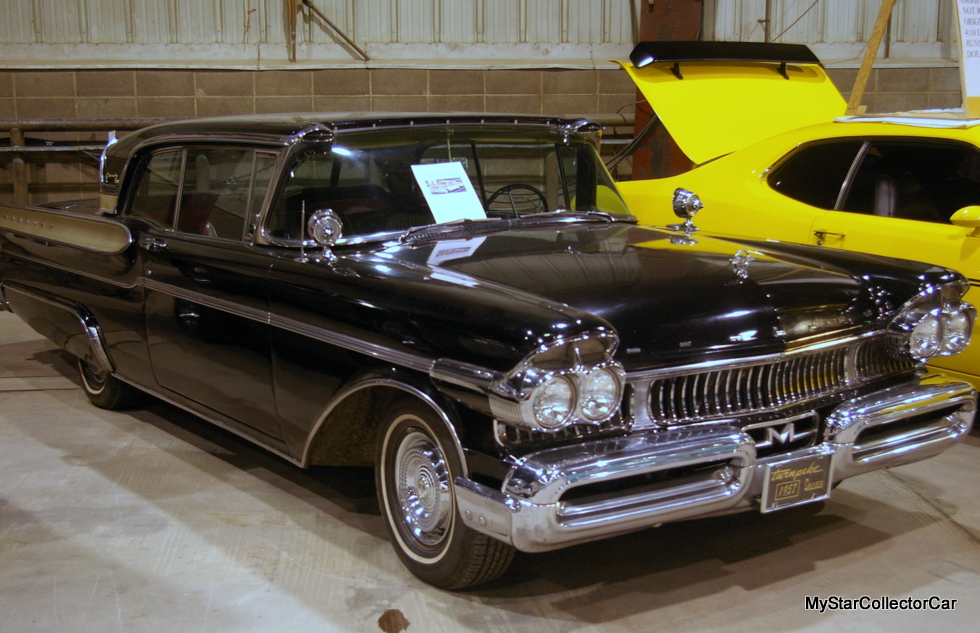 This Mercury had a unique style that made it stand apart from the rest of Detroit’s finest at the time. The Turnpike Cruiser had an unusual front and rear end design that was very different from other Fords– let alone the competition. 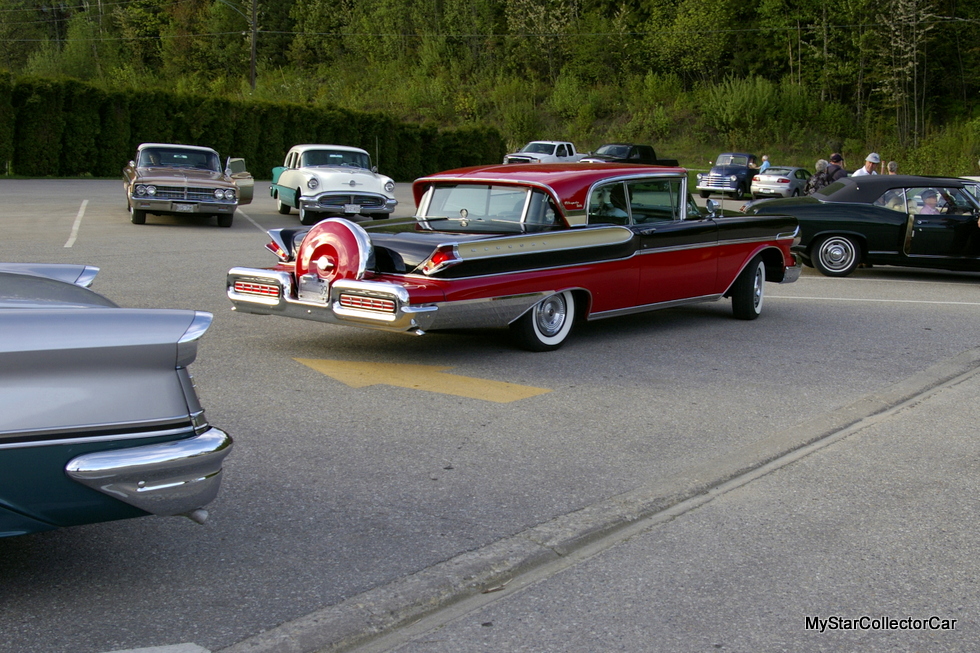 The headlights were suspended well below the top of the fender eyebrow and the rear taillights had a radical inverted design. The Turnpike Cruiser was conceived from a dare-to-be-different design and few could argue that it did not meets its goal.

The heavy use of chrome on late 1950s cars was not lost on the Turnpike Cruiser. It boasted some serious bright work that could be used as a sterling silver example of chrome excess during the early years of Ike’s interstate program.

Mercury was always a higher end member of the Ford family and had more appointments than a basic Ford model. The Turnpike Cruiser had a unique rear window that rolled down for extra ventilation on road trips.

The unique roll-down rear window reappeared in Mercury models during the mid-60s and once again proved to be a hit with customers. 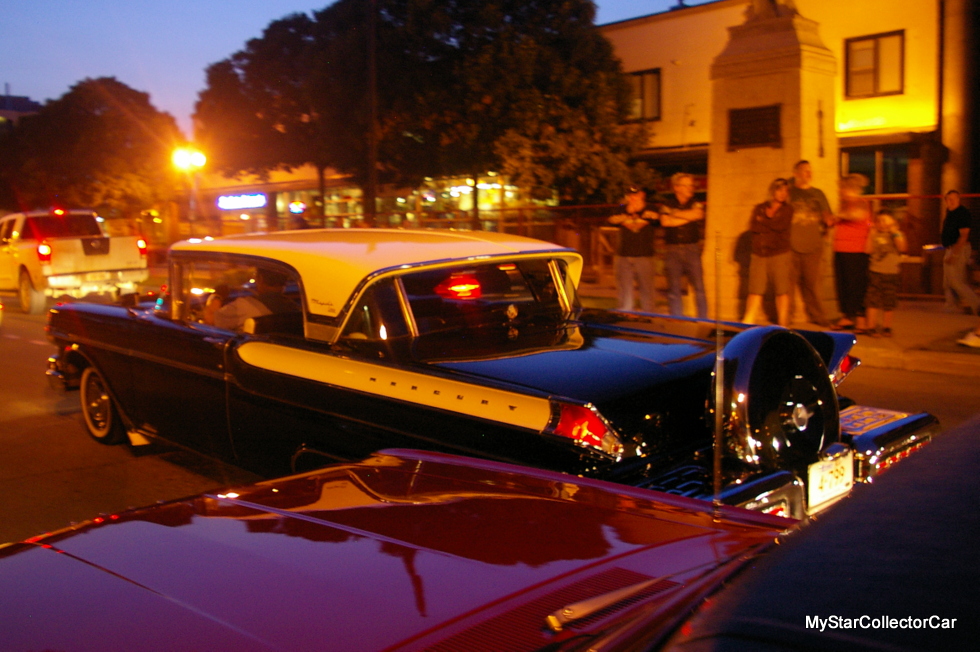 Another unusual feature on the Turnpike Cruiser was its radio antenna. The antenna was built into the A pillar (windshield pillar) and pointed forward to catch those rock and roll radio station signals-or maybe not.

The truth is a typical Turnpike Cruiser owner likely had his car radio tuned into easy listening stations where Perry Como and Nat King Cole were kings of the airwaves.

The Turnpike Cruiser became part of 1950s automotive folklore and left the building in an Elvis sense after a very short production run. President Eisenhower had a good idea when he initiated the interstate highway system in 1956. 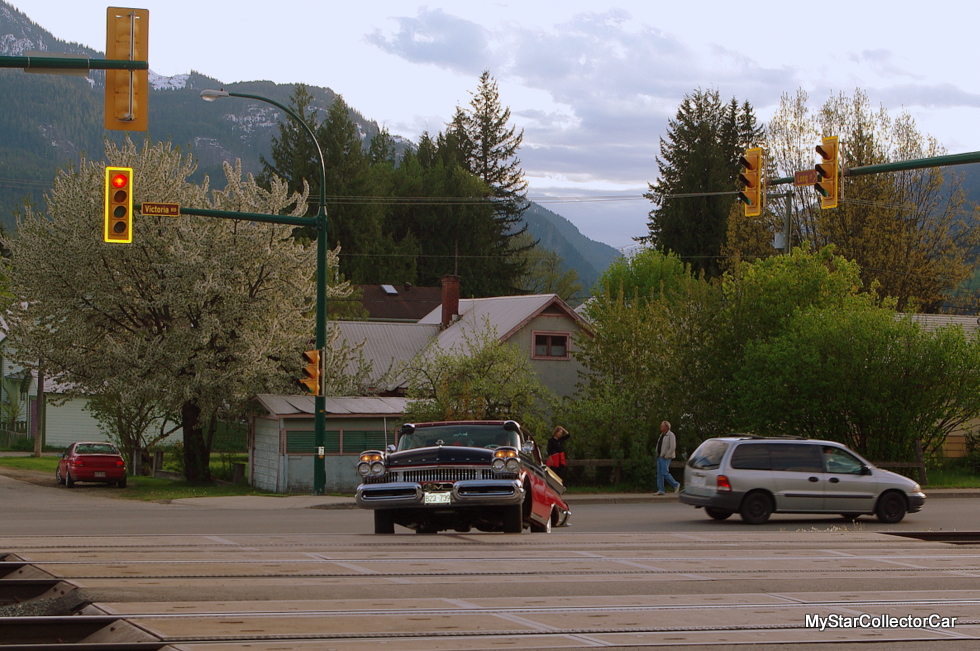 But Ford had an even better and cooler idea when it built its first Turnpike Cruiser in 1957.