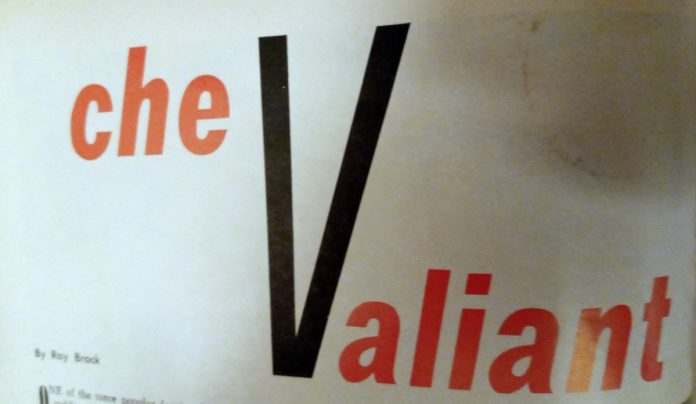 One of the most effective ways to connect with the automotive past can be found in old car guy magazines.

The debut of the Valiant (initially dubbed the Chrysler Valiant and later known as the Plymouth Valiant) was a major departure for Mother Mopar because these compacts were built to compete with the very popular VW Beetle in the small car market.

The big difference was North American compacts were bigger and faster than a Beetle–plus they offered better passenger comforts such as heat during the cold months.

The first-generation Valiants could easily outrun a VW Beetle, but they were no match for full-sized domestic cars, mainly because the Valiants left the factory with modest six-cylinder engines known as Slant Sixes, engines designed at a tilt so they could fit under the hood of a Chrysler product.

Slant Sixes did not offer brute force power in stock form but could be massaged into monsters with the proper mix of internal upgrades, fuel delivery system improvements, headers, and superchargers. Or car guys could swap out the stock six-banger for a lively small block V-8 like Hot Rod’s example in their October 1960 edition.

The engine of choice was Chevy’s famous 283 cubic inch small block, arguably one of the most famous motors ever built for hotrodders from that era-or any era for that matter.

A Chevy engine in a then-modern Mopar undoubtedly sparked some controversy in the car guy world at the time, given the fierce rivalry between the Big Three during the Muscle Car Wars of the late 1960s, particularly since Chrysler had a small block legend known as the 340 in 1969.

However, a strong case could be made for a Corvette 283 engine swap into a 1960 Valiant by hotrodders at the time. A 283 small block was already a favorite power choice for car guys because it was readily available and had an enormous list of performance choices that were affordable upgrades to a stock version, so the 283 was a runaway hit for car guys on a budget.

In 1969, the aftermarket even offered an engine mount swap kit that made the switch from a Mopar Slant Six to a 283 Chevy small block easier for a hotrodder.

The project still required above-average mechanical and fabrication skills, but the net result was a sleeper 4-door sedan that ambushed its competition on the street and track. Hot Rod Magazine called it a Chevaliant and were happy with its ¼ mile times of 94.83 mph at 14.83 seconds but added the car would likely break 100 mph if the modified Mopar got rid of its stock tires and rear end.

The Valiant’s factory rear end could handle the extra horses, but it had a higher rear gear ratio and did not have posi-traction or slicks, so initial launch was not as good, according to Hot Rod Magazine.

It was clear the Valiant was intended to be a driver because the builder included a modified 1951 Chevy heater system that was moved to the front of the engine compartment. The heater was useful since the car was built for use in the northeastern US and needed heat for cold weather driving.