This 1956 Ford F-100 was the second highest Friday night sale at the recent Barrett-Jackson 2014 auction.

This classic custom ride wasn’t a typical high-end auction transaction because it represented far more than a work of automotive art.

This incredible truck represented a whole region because Saskatchewan Premier Brad Wall was even on the stage when it was hammered down for sale.

Saskatchewan is a large Canadian province with a relatively small population but the community spirit is off the charts. Saskatchewan people are extremely proud of their province and nowhere is it more evident than their CFL football team-the Saskatchewan Roughriders of the CFL. This is the little community-owned team that could (only four Grey Cup championships in over 100 years) but the 2013 Grey Cup win at home was a magic moment for Rider fans. 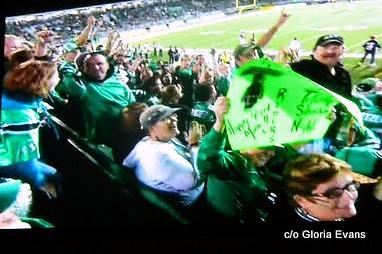 There is literally no place on the planet that doesn’t have some guy wandering around in a green and white Rider jersey and the Barrett-Jackson video feed was no exception-there were Rider fans ripping it up in the stands when this truck sold. The Riders enjoy massive merchandise sales because the buy-in from the community is a juggernaut-one that inspired the Dallas Cowboys to send an envoy to ask how they do it . 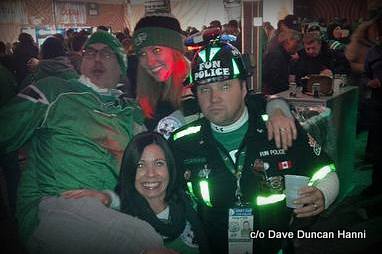 The green and white jersey sums up the Saskatchewan community and this ’56 Ford F-100 put a dollar value on it at Scottsdale 2014.

Mark Bach was there when this incredible truck sold and he filed this report for MSCC.

“At the 2013 SEMA Show, Ford Canada unveiled a custom 1956 Ford F-100, named Snakebit F-100, powered by a supercharged 5.4 liter V8 and matched to a manual six speed transmission. The truck had some styling touches emulating a Shelby GT500 and a two tone leather interior.

The concept for the truck build started as a team building exercise for the employees of Industrial Machine and Manufacturing in Saskatoon. Renderings of the truck were produced by a local artist Bruce Williams and the final build was undertaken by Byron Thiessen. It was built in Saskatchewan and sponsored by the Saskatchewan Area Ford Dealers.

Surprisingly, it turns out Saskatchewan is one of two provinces without a children’s hospital. So the proceeds from the sale during the Barrett-Jackson Car Auction in Scottsdale Arizona, are going to help build the Children’s Hospital of Saskatchewan.

As typical of the Barrett-Jackson sanctioned charity auctions; all the proceeds go to the charity with Craig Jackson waiving his fees. On Friday night it garnered $450,000, the second highest amount bid for the night’s block of vehicles.

And Gene Simmon’s connection to the car? The musician admits he didn’t even learn how to drive until his late thirties. But his wife/actress Shannon Tweed is a former resident of Saskatoon and her mother is a local hospital administrator, Hence the connection and sponsorship for Gene Simmons, perhaps more famous for his makeup and lizard like tongue.

But the silver custom truck captured the hearts of many generous car enthusiasts, the spirit of Saskatchewan and the wallet of one generous contributor”.

More of Mark’s automotive meanderings can be found at http://route66pubco.com/