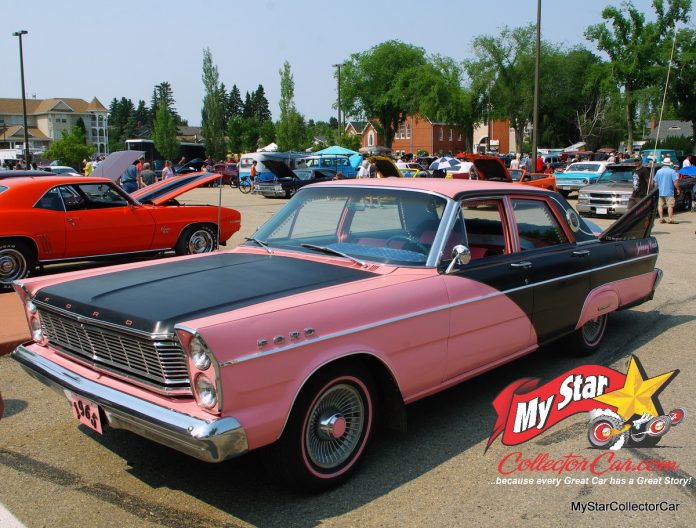 Johnny Cash was a country legend, but a number of car guys remember him for one song.

The song was called ‘One Piece at a Time’ and it was about a guy who worked at GM building Cadillacs  from 1949 to around 1973–he built a Caddy over that period from stolen parts.

This 1965 Ford Custom followed the same game plan–except for the stolen parts.

Marv Drewes is a huge fan of Johnny Cash. He does a great musical tribute to The Man in Black and part of the reason may be DNA because Marv’s grandfather Dewy Cash is a second cousin to the country legend’s grandfather. Marv’s ’65 Ford Custom had a story of its own long before he decided to turn it into a rolling tribute to a country song.

The original owner bought it brand new in 1965 for his daughter’s 16th birthday–Marv said it was 6-cylinder, three-on-the-tree stripper model that sold for 2400 dollars. She had a boyfriend at the time who worked in the oil patch, and he blew up the engine after only 30,000 miles.

The car went into a long hibernation before Marv bought it from the grandson of the man who bought it for his daughter. Marv said the negotiations involved wild swings in numbers, but finally bought the car for 600 dollars.

Marv found a 351 out of a 1965 LTD and bolted it into the Custom. He had to update the coil springs to handle the extra load, but the increase in horsepower was worth it. Marc also completely rebuilt the brakes from front to back for a grand total of 200 dollars plus he redid the interior and carpet.

This car wears a lot of pieces from donor cars, but the most obvious one is the ’57 Dodge fin. Marv wanted the fin, but he had to take the whole car because the previous owner wanted the entire Dodge gone–fins and all. Marv has to explain the one fin over and over again because most people don’t get the Johnny Cash ‘One Piece at a Time’ theme.

That One Piece at a Time theme plays throughout the car. The fender skirts feature Lincoln badges; the C-pillar badges on the Landau roof are Merc hubcap centerpieces; the wheels were rescued from a Lincoln; the windshield is from a ’65 Ford wagon, and the Ford badge on the front fender is from a Ford van back door.

Marv stuck to his budget in the paint job–it was industrial paint applied by hand with a sponge and it came to grand total of $40.00. He did all the work on the homemade Continental kit, the fender skirts, and the fender valences because Marv is a hands-on guy.

The Ford sailed through an inspection because it only needed a pitman arm after 30,000 miles of wear. Marv said it handles and brakes better than his much newer 2001 Mercury Marquis so he’s very comfortable behind the wheel of the ’65 Ford.

This car cost Marv 2000 dollars to get back on the road–it wasn’t free like Johnny Cash’s Cadillac, but it was close.

THE MONSTER GOES TO A NEW HOME–SOMETIMES IT’S NOT A CHOICE...