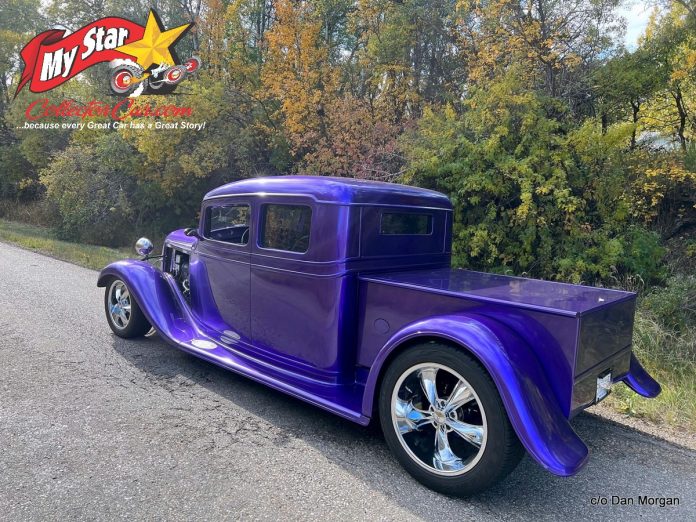 Maple Leaf trucks were built by General Motors of Canada between 1935 and 1952, thus it is an appropriate name for these Canuck trucks.

The ‘35 Maple Leaf was a grain truck on the family farm until the mid-60s when it was taken out of service and parked on the property. Dan mentioned the truck had already undergone one heart transplant when another grain truck’s engine was donated to the Maple Leaf, a process that included Dan’s father.

Dan’s dad wanted to make a good impression on his in laws, so he also helped put a hoist on the truck’s box during the latter stages of the 1935 Maple Leaf’s active years on the farm.

The truck eventually became a storage bin for garbage until Dan asked his uncle (the next owner of the farm) if he could buy the Maple Leaf and resurrect it from the dead. His uncle liked the idea, so Dan became its owner in 1983.

However, life got in the way for Dan and his priorities to his own young family were higher, so he left the 1935 Maple Leaf on the back burner for many decades until about 4 years ago. A major personal moment in Dan’s life made him think very seriously about completing the truck project, so he tackled the challenge in a big way.

Dan devised a game plan for the truck, including a big powertrain upgrade that included a crate LS2 engine hooked up to a sturdy 4L60-E automatic overdrive transmission. The Maple Leaf also has a 1980 Jaguar rear end to handle the extra horses.

The Maple Leaf now has a custom frame with air bags on all four corners to smooth out the bumps. Dan added power disc brakes to all four wheels to slow down the truck when the situation warrants it, plus it now sports a Mustang II steering system.

The most obvious change to the ‘35 Maple Leaf is its appearance because Dan devised some major changes to the former small cab 1 ½ ton grain truck. It rides lower on the air bags and now it can get down to about 2 ½ inches off the ground if Dan chooses that ride height. Additionally, he chopped the Maple Leaf’s roof 5 inches and channeled it 3 inches.

However, the biggest change was the overall length of the truck’s cab after Dan added about 28 inches to its length and extended its doors about 3 inches. He also added a tilt box to the project because Dan wanted to honor his late father’s role in the original tilt box project on the Maple Leaf back in the 1960s.

Sentimental attachment to the 1935 Maple Leaf was strong for Dan, but his mother has an even stronger attachment to the family truck because she remembers it so fondly from her own childhood. One of his mother’s fondest mementos is a photo of her standing on the truck’s front fender when she was a toddler under the watchful eye of her mother (Dan’s grandma).

Dan completed the build and surprised his mother with it at a family function. She was aware of the truck project, but Dan’s mother was not aware of its completion, so he purposely showed up a little late to catch her and other family members off-guard. Mission accomplished because she was through-the-roof excited to see the old family truck back on the road and even jumped behind the wheel for a photo-op.

This 1935 Maple Leaf has all the modern creature comforts such as power steering, ac with custom defroster vents, state-of-the-art sound system, power doors and power/heated front seats from a 2013 Mustang GT, along with a custom-fitted rear seat from the same car. Now the old farm truck is a 21st century road machine with all the whistles and buzzers.