There are more than a few North American automotive journalists who like to use domestic car brands as speed bags.

One of the more prominent figures is a guy named Dan Neil-he works for the Wall Street Journal.

Dan was a mystery man to me but some research told me that he does have impressive credentials.

He’s won a Pulitzer Prize among other awards and he travels in the upper echelons of automotive journalism.

So why does he need to score cheap points off the domestic car culture?

Dan’s a very good writer-you don’t make the Wall Street Journal roster without talent. His writing is heavily laden with colorful, well-planted metaphors about the driving experience- similar to, but a generation after Uncle Tom McCahill, the all time automotive writing legend.

He lit me up when he compared NASCAR to F-1 racing.

Neil called it “technology comparable to using a stone axe against a stealth drone”…apparently Dan isn’t a fan of old tech OHV engines found in NASCAR.

But this is a proverbial one-way street of derision because NASCAR people have the utmost respect for F-1…and any other form of racing.

The biggest problem with a Euro-centric automotive journalist like Dan Neill is that he’s not really a car guy-he’s more specifically a “country of origin” guy. He basks in the reflected glory of upper echelon European cars like Ferraris and higher end Porsches.

Dan will vehemently disagree, but my favorite vignette of Ferrari history came from the 1966-69 era of Le Mans when Henry Ford II and his GT40s gave Enzo Ferrari some serious lessons in humility. That was a high point for the automotive industry in “the colonies”.

This issue is obvious – Ferraris are the Peyton Mannings of the European car world but I grew up with imports in Canada that were clearly 3rd stringers.

My dad bought late 40s Austin A 40s, early 50s Austin Somersets and late 50s Morris Minors for second cars. They were cheap, marginally okay on gas, hard on oil and brutal in winter. The best part about them was the smell of leather seats and the turn signal arm that stuck out when you flipped a switch. That option often worked almost half the time. 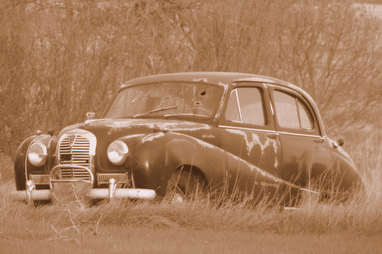 I had a mental exercise when I was a kid. It was childishly simple. I imagined my dad driving the Austin or the Morris flat out at 65-75 mph on the only four-lane highway in the area.

To me he was the greatest driver in the world but that make-believe journey had only one ending in my 8-year-old mind…crash and burn. His 1963 Plymouth didn’t give me the same heebie-jeebies. 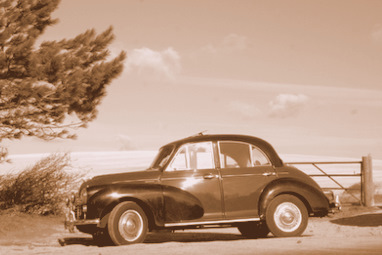 My oldest sister bought a 5-year-old Vauxhall Victor station wagon in 1965 and moved to Vancouver for a new job in nursing. That’s a pretty demanding trip through the Canadian Rockies-the poor little Vauxhall came home on a stretcher. 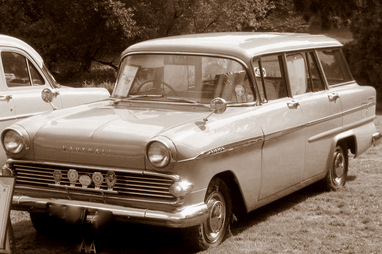 My first car was a 1961 Volvo 544 B-16-I spent most of Grade 11 sorting out the mystifying nuances of the electrical system. The headlights came on when you turned the signal lights on, the horn honked when you pulled the headlights on and the heater switch put you in a parallel universe. 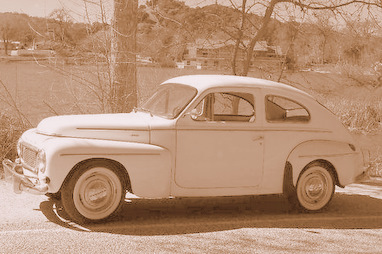 There was a brief dalliance with a 1961 VW Microbus in Grade 12 until I sold it to my brother. He inherited a morning ritual-boost the dragging 6-volt starter with the extra steroids of a 12-volt battery. That worked fine but when the clutch cable broke for the 16th time the 11-year-old microbus was sent to hippie heaven. He could live with the 5mph top speed up hills but the clutch problems broke his will.

My older brother owned a Mercedes 230 S. I clearly remember a white-knuckle 75 mph night trip in this 5-year-old car tucked right behind a semi truck for nearly 100 miles. The MB’s charging system had failed-no headlights.

None of those experiences with European cars poisoned me on imports-they were an integral and colorful part of a great automotive adventure.

Real car guys love everything with 4 wheels. ‘57 Chevy guys will flock over to an exotic new European sports car because it’s a great-looking, high-powered car-they won’t check birth certificates for country of origin. They love everything automotive for the purest and simplest reason-they are car guys.

I’m proud to count myself among them.

ROBERT:”I agree we car guys love em all.Those elitist Euro guys are ones who lose out by not enjoying all manor of racing. Although they seem to coming around to American style racing. I owned a 1960 Austin Healy 3000 and a MGA and 3 MGB’s. If anybody should have a problem with another countries automobiles it should be us. Everyone remembers the prince of darkness don’t they?”

DENNIS:”I’m not a ‘Eurotrash’ fan but have you see this thing?http://www.youtube.com/embed/nd5WGLWNllA?rel=0

DAN:”indeed! That is inspired! Thanks for the electronic ink. All best.”

BERNARD:”Awesome article guys, and awesome pix. I remember seeing those Euro-wheels around Peace River too. NASCAR v F-1, like CFL v NFL. Come on up, guys and show us how it’s done…”