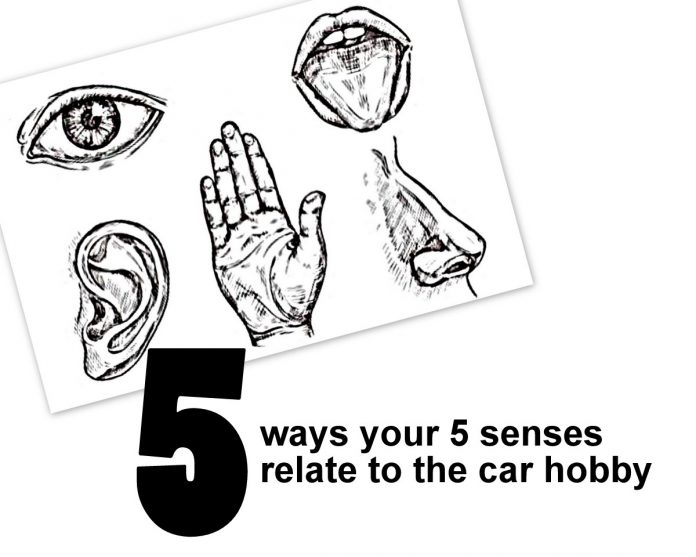 These five senses are in constant use every day for people because they help us figure out the world around us, including the world of old cars.

The first sensory cue is sight. This sense may be the most important sense for car guys because old vehicles have a distinctive retro style that is clearly not from 2021. For example, the outlandish fins found on the back end of a new car meant the vehicle was built when Elvis was young, skinny, and dominating the radio air waves with his brand of outrageous rock and roll.

Tailfins on cars were largely amputated by the early 1960s, but they are an excellent example of the sense of sight as it applies to the car hobby.

The second sense pertaining to the car hobby is hearing. There is a distinctive sound to a free-breathing big block V-8 engine, a sound that becomes very evident when the engine is bigger-and the mufflers range from meager to non-existent.

A header exhaust will help the big engine breathe a little easier, plus it will help increase the decibel level to the meager or non-existent mufflers. The unbridled sound of a monster engine is a symphony of massive horsepower sounds for car guys.

The obvious example for a sense of touch are the highs and lows in metal repairs on a car body. Every car guy will see the Grand Canyons and Mt. Everests in their finished paint job if they have no sense of touch. This sense is critical to professional auto body guys and is a vital component of a successful build.

Mechanically speaking, a sense of touch is necessary to start a nut or bolt, feeling around for what the eyes cannot see, proper tool use, and a million other reasons that are a fundamental part of an old car project.

Number four on our list is taste. This sense may seem like a tough fit in the world of car guys, but taste is also a vital component of the car hobby. For example, condensation on the inside of a car’s windshield may not be the result of simple condensation. A taste test may indicate a larger issue if a car guy swipes the windshield moisture with his finger and finds a bitter flavor in the condensation.

The taste test would not have a distinct flavor if it was water molecules on the windshield glass and the bitter flavor indicates engine fluids have been released into the car’s heater core-or the heater core itself has developed a leak.

The fifth and final addition to our list is smell, a sense that is vital to the well-being of a vintage ride. A good example of this basic sense is any occasion when a car guy smells something burning because this aroma is never a good one when it comes to cars–unless it’s roasting the rear tires or race fuel.

Otherwise, something hot enough to give off a strong burning smell indicates something has failed or worn out within the mechanical system of the vintage ride. An experienced car guy may even zero in on the issue based upon the aroma.