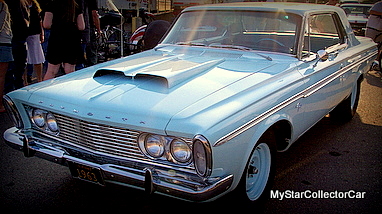 Wendell is a young man with a problem-a Mopar addiction.

He’s the kind of guy that simply can’t pass up any opportunity to own Mopar history.

This car reached him-not for its looks, the shoebox look is an acquired taste but for its massive 426 Max Wedge heart.

This is the Super Stock that dominated the ¼ mile circuit for several years in a row until Ford cried uncle and put the mammoth 427 full race monster into its Galaxys and eventually its Fairlanes. These cars really snuck up on you-they looked pretty tame from behind and from the side until you saw the scoops-then you knew that this wasn’t anything like that Savoy with the gas-saving slant 6 that your great-uncle drove to church.

This was a soul crusher if your ride was run of the mill.

Wendell doesn’t drive this insane street machine to the store or anywhere else that’s frivolous because it just wasn’t built for it. It’s got that lopey idle, gets about .01 miles per gallon on the expensive stuff and its simply too much to hold back in modern traffic. 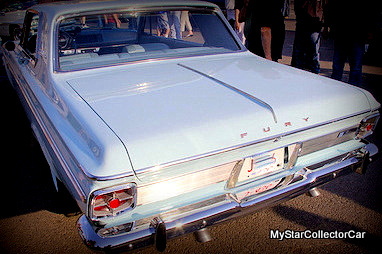 Driving this old Plymouth warrior is not much off the experience Jeff Gordon would have driving his NASCAR ride in rush hour traffic.

Even so, Wendell has kept the stealth look of this brutally powerful 63 Plymouth  intact-when last seen he had snow tires on it so the burnouts wouldn’t hurt his wallet.