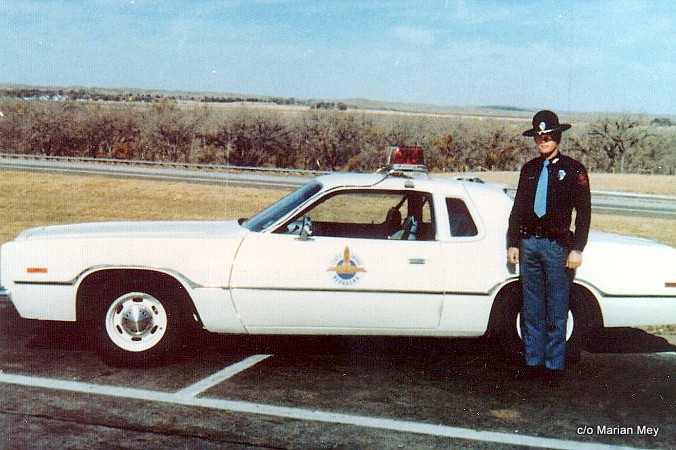 Ex-police cars have a cult following that is unsurpassed in the old car hobby.

Part of this is attributable to the job that these cars used to do before retirement.

Park an ex-police car at a show and you have an instant crowd. Some guys talk about the view from behind the wheel-they call them police officers.

Others talk about the view from the back seat-they’re called unlucky.

This particular ex-Nebraska Highway Patrol is more rare than an AAR Cuda because it’s a 2-door 1978 Dodge Monaco pursuit car.

There were less than eight built for the state. 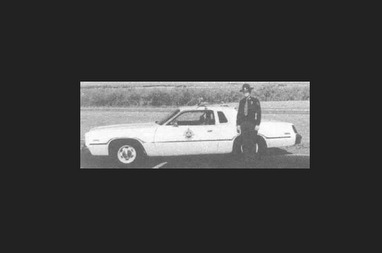 Marian Meyer is married to Bret, the current owner of this rare Mopar and she was happy to fill in the blanks on this Dodge “Hubby bought this car before he met me. I do know that it was originally assigned to the NE State Patrol for the 5-year contract/warranty with Chrysler.

“This was a chase car on I-80, just issuing tickets due to the fact it didn’t have back doors. Apparently the cops liked to hide in the median and come out full throttle (catching quite a bit of air) chasing speeders, so the front ends got mangled pretty good”.

There’s only so much life left in an old police car after a few years but this Dodge got second chance as Marian explained, “After its 5-year tour on I-80 it got sent to Spaulding, NE for another 4 to 5 years with their police dept. My husband bought it in 1989”.

Police cars are known for more than a car you fear to see in the rear view mirror-they are the original muscle cars.

Car guys respect this about police vehicles as Marian recalled, “He took the (semi-smog) 440 from the ’74 Fury cop car, and put it in this Monaco, ditching the smog 400. The Monaco has upgraded “cop suspension” equivalent to 1/2 ton truck suspension”.

The end of the road for old police cars is less than glamorous no matter how well they performed. Marian explained,“When he got the car, instead of pulling the police sticker off of the door, they painted over it with white house paint, which is how it remains. Spaulding also painted over the surface rust with the same paint!” 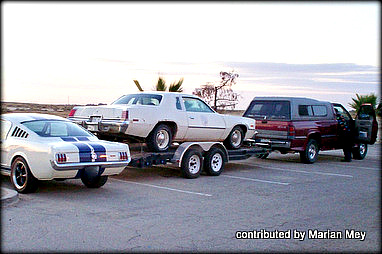 The car became a daily driver as Marian recalled, “Bret essentially drove it to work every day for several years. As it didn’t have tailpipes (exhaust dumped in front of rear axle) with glass packs, it was quite loud. He set car alarms off pretty much everywhere he went. If he didn’t set the alarm off with the exhaust, he’d slam the car door, which usually did the trick”.

Driving this big old Dodge was an adventure. Marian added, “One snowy night in Omaha he couldn’t stop, so he aimed for a packed snow bank, which did the trick. He backed out without car damage, leaving snow all over the 2 lanes, and headed off to his destination. On the way back, he still had snow packed in and around the headlight and grille, he drove passed a cop looking at the destructed snow bank wondering where the accident went to, as it apparently would have be difficult to have survived such an attack on the icy bank. The ol’ Dodge sustained no damage in the molestation of the icy snow bank”. 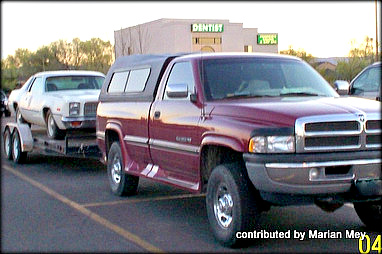 Old car owners can understand the background to this memory-Marian recalled a noisy wakeup call, “One night in Omaha it was incredibly cold and the horn shorted out. The car was parked nose up to the outside of the garage door when it went off. Police car horns are incredibly loud – especially reverberating off of a wall. After waking us both up, my husband got dressed and made it to the back door when the horn overheated and quit bellering. He came back to bed, got undressed, and was climbing under the covers when it went off again. This time he made it to the car and disconnected the horn. The next morning I was making amends to the neighbors for all the ruckus of the incredibly loud cop horn against the incredibly still, incredibly cold night at about 3:00 AM. My very cool neighbor, Marvin (a VietNam vet) had had a party the night before and fortunately slept through the whole ordeal. Actually he was the only one I made amends to! “

Marian had her own personal investment behind the wheel of this big, bad Dodge police car, “When we were getting transferred from Nebraska to western Colorado for work, I drove it across Nebraska in June with the car full of house plants. I couldn’t roll the windows down, due to the wind blowing my plants to bits. The heater would not shut off and we had ‘no time’ to mess with it, so I was quite warm, to say the least. HOWEVER when we hit the Rocky Mountains outside Denver I had absolutely no problems climbing that ‘hill’! It was awesome.

I’d never been able to speed over the Rockies before that car! I almost had to pull my husband’s ’76 Dodge W200 through the Eisenhower Tunnel, as it was crawling up the mountains on its knees with it’s worn-out 318. We stopped in Eagle, Colorado for fuel and rest. At this time I was happy about the “thermonuclear heat” as there was snow at the top of the Rockies in June. The Monaco after having driven all the way from eastern Nebraska wasn’t sure about the altitude, so it vapor-locked. After about a gallon of cool water on the fuel pump, we were on our way again, me leaving the old ’76 truck in the weeds, per usual”.

The end game with any old car is to simply make it better. An incredibly rare car like this ‘78 Monaco makes that idea an imperative. Marian explained the game plan, “The car is a blast to drive. We plan to restore it to its original cop-car glory – all stock (however with the 440). Never at a loss for power. HOWEVER we hadn’t driven it for quite a few years, due to having 23 +/- cars to drive/restore first. We got word that they wanted to see it in California for Mopar Day at the track racing.

However the 24-gallon gas tank in the car kept gunk in it despite steaming it at the car wash 2-3 times. The fuel system failed miserably on the track. We got a replacement tank since, and are planning to get it on the road within the next year or so. (After our day at the track, we decided we needed a REAL vintage race car, so we are almost done with a ’65 Barracuda 273 4-speed car.)” 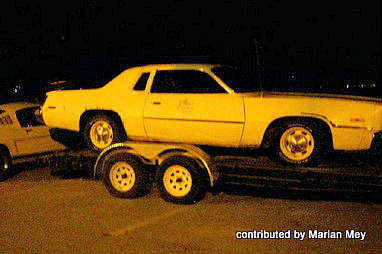 The old Nebraska Highway Patrol Dodge Monaco has been through many adventures-even in civilian life. Marian recalled another incident, “Another time he parked sideways on a hill in a parking lot. We had had a freezing rainstorm the night before. When he came out for lunch, the car had slid sideways down the hill approx. 75 to 80 FEET down the hill before hitting a snowbank and stopping. Fortunately no one else dared to park in the lot that day. No damage to the ol’ Dodge.

This is such a rare car that Marian and Bret feel like celebrities at a show. Marian explained, “People love the car – mostly because of it’s cop car 2-door nature. It needs a couple of chrome strips and a rear bumper, as cars rusted very badly in eastern Nebraska with all the salt and snow. Even in its sad state of neglect, it got more attention than most of the other Mopars out at the track – even the ones that were running! One of the guys at the track that day in California came across a ’78, and gave us the big 24-gallon gas tank out of it. (It’s hard to find the big 24-gallon tanks).

We had driven my ’02 Mustang GT out to California for a track day the next year (prior to finishing the ’65 Barracuda) and put this monster gas tank in the trunk of my Mustang. The guys didn’t think it’d fit, but I had no worries. It fit snug with our helmets and racing gear and tote bags, but it did fit! Our Australian Shepherd was a little cramped in the back seat having to share with a cooler, but he fit too”.

The biggest problem with the restoration game plan is simple-they’re having too much fun with the car as-is. Marian admitted, “It’s a blast to drive down the road. I have to keep an eye on the speedo, because it does get away from me – even in the mountains. Very comfortable with minimal rattles, and drives straight down the road. (Hubby had to weld part of the front suspension for it to hold after all the years of abuse it had.) The heater still has “thermo-nuclear heat” as he puts it”.

Most old police cars have a bleak future after a glorious career, but this 1978 Dodge Monaco two-door hardtop is something special because it’s so unique.

That’s why the Meys are proud of owners of one of the rarest 70s era Mopars on the planet.