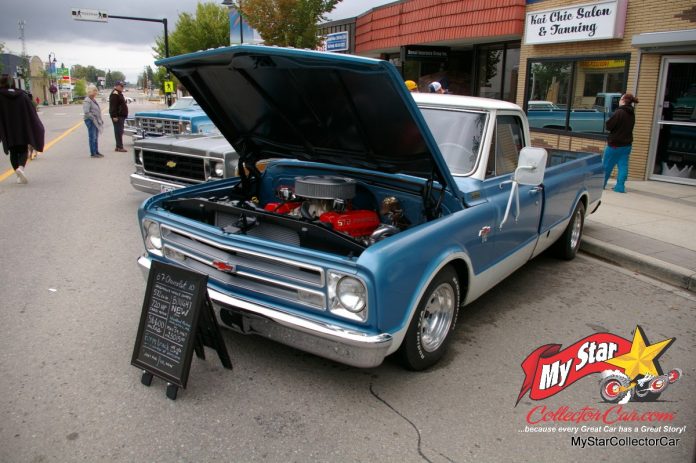 One of the fundamental reasons for buying a 1967 Chevy C-10 pickup truck is hard work.

Wayne McAllister is the current owner of his family’s legacy pickup and is well acquainted with the ’67 Chevy’s long history on his farm. It was even used for hauling pigs on occasion because the Chevy pickup was purchased for non-glamorous farm duties by Wayne’s granddad.

Unfortunately, the truck encountered a major issue when its original 327 cubic inch small block engine blew up, so it went into storage in one of the farm’s dairy barns. Eventually it was given another 327 engine transplant and was reintroduced to farm and McAllister family duties.

The stylish ’67 Chevy saw a variety of roles in the McAllister clan, including a stint as a daily commuter vehicle for Wayne’s son Wade when he went to high school. At that point, the 55-year-old pickup was used by the original owner’s great-grandson, a remarkable part of its lengthy history in Wayne’s family.

The 1967 Chevy C-10 remained in active duty until the winter of 2015-16 when Wayne decided to give the truck a brand-new attitude with a major engine upgrade. Wayne grew up on a farm and learned his mechanical skills along the way, an education that comes with the territory for most farm kids.

The biggest change came under the hood of the ’67 Chevy C-10 when Wayne wedged a massive 572 cubic inch GM crate motor into the space formerly occupied by the 327 small block. The process went surprisingly well, according to Wayne, although he needed to add custom-built headers to the engine.

A 572 crate motor churns out 720 horsepower and required beefing up the truck’s factory two-speed Powerglide automatic to handle the massive herd of extra ponies under the hood. Wayne also addressed the rear end and added extra strength to its gear components. The truck also sports 3:73 posi-traction so Wayne can roast both rear tires whenever the spirit moves him.

A noticeable odor of race fuel was in the air after Wayne fired up the 572 and gunned it a few times. The free-breathing monster under its hood was wide awake at that point.

The truck has another alteration that is not quite as visible or loud: an air bag system on all four corners of the suspension. The truck is now lower than factory, but it is a subtle drop.

Wayne’s main purpose was to enhance the performance of the truck, but he wanted to preserve its long history within his family, so he left the truck’s exterior in original condition. Just for the record, the truck is in remarkable original condition, given the hard work it has encountered over the years.

Mission accomplished for Wayne and his family legacy truck.