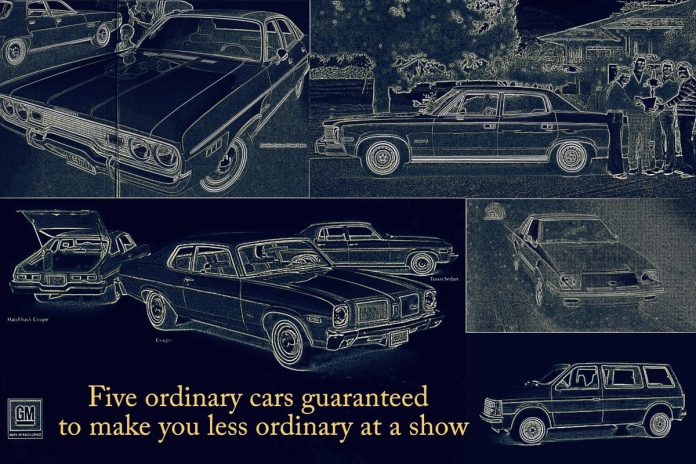 Most car shows have a typical roster that includes a large dose of Corvettes, Mustangs, Camaros, Mopar muscle, and tri-five Chevys, so you’re competing against several examples of your car at every show.

There are two ways to compete.

The first example is the 1978 AMC Matador. This car makes your head spin because there is no way to describe it—it’s the 70s equivalent of the 50s Edsel.

The car looks familiar from the A-pillar back because the side profile hasn’t changed much from the 60s ’67 Rebel—AMC was famous for reinventing old platforms for cost efficiency.

The big change is at the front because its cowl juts out two feet and it’s full of angles. You’ll be a lone wolf at most car shows– but nobody will forget your car.

The next car is less dramatic because it’s so familiar—it’s the 1984 Plymouth Voyager minivan. These vehicles were like VW Beetles—seen everywhere—until they weren’t.

If you roll into a big show in an ’84 Plymouth Voyager minivan, you won’t get the buzz you’d get behind the wheel of a hemi Superbird.

No problem–you will get hours of stories from people who grew up in an 80s minivan, plus you’ll probably have the only ’84 Voyager at the biggest Mopar shows. Gen X car guys will flock to your Voyager because their world was full of minivans—not Superbirds.

The third ordinary car is another Plymouth. It’s the 1971 Satellite four-door sedan. These Satellite sedans were used up as family cars, taxis, and police cars–then they were given the last ride through a shredder because nobody with an ounce of critical thinking would restore one.

Those that were saved were turned into fake police cars, so if you drive Grandma’s mint, non-police spec, ’71 Satellite 4-door in 2022, you are a celebrity.

The fourth car is the 1982 Ford EXP. These cars filled a unique niche in the Ford sales lineup, because they were two-seaters. Ford hadn’t done that since the 1955 Thunderbird, so the EXP was an unexpected surprise for buyers.

The EXP evolved into a decent performer in its later versions, but in 1982 it was more show than go. That’s no problem in 2022 because you’re in rare company if you own a 1982 Ford EXP. Welcome to Contrary to Ordinary World.

The final ordinary superstar at a car show is the 1973 Olds Omega. This car may fly under the radar because it looks like a Nova, and Novas are as common as hot dog stands at a car show.

Look closer and you’ll see a split waterfall grille with distinctive badges and a refined interior you’d never find in a mere Nova.