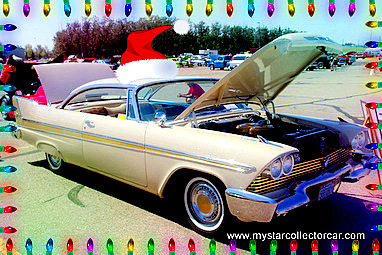 The 24 Cars of Christmas have all been picked subjectively.

‘There are no real hard scientific facts to back up any inclusion in this elite club and there is no particular order to the selections.’

It’s all about basic gut reaction-and huge built in bias.

The list was made with no specific demographic group in mind, but these picks do reflect a huge North American baby boomer bias (Jim and Jerry).

There’s a log jam of mid-60s Big 3 muscle cars and no vintage Ferraris for that regional-centric reason.

‘But long before the GTO, SS396 and GTA there was a big muscle car war in the mid-50s. The 58 Plymouth Fury was a front line soldier in this battle.’

Every car on the list made an impression on me at some level, but the Chrysler Corp. fin cars were the first cars ever listed in my memory hard drive-the fin cars looked incredible in my pre-schooler world and that turned out to be a lifetime commitment.

You think a Harley Davidson makes you a true individual in the clone car traffic of today? Try driving a fin car on 21st century streets-a concept my fin car brethren totally understand…

That’s why I own several versions of the golden Exner fin car design era. But the 58 Fury was the peak of the first entry-level Mopar muscle car era and, like my dad was before me-I’ve always been a Plymouth guy. In this case, the 58 Fury was a Plymouth that had done a lot of serious time in the weight room.

The 58 Fury came in only one color–Buckskin Beige. But under that vanilla hue beat the heart of a monster-the 350 cubic inch 305 horse Golden Commando. This wasn’t Grandma’s 3 on the tree, flathead 6 Plymouth Savoy-this was a car far more suited for take no prisoners guys like the late John Wayne. This was a “Fury” and a “Golden Commando” powered it-wimps need not apply.

There was nothing subtle about this Plymouth-the Fury was a “slug you in the gut car” and it backed up its tough sounding name with deeds, not words. The Fury hit 60 miles per hour in 7.5 seconds and it topped out at well over 120 mph…in 1958.

Long before its far more well publicized younger siblings like the GTX and Cuda the Plymouth Fury was on the front lines of the late 50s mean streets giving many a would-be competitor a fleeting look at the Exner trademark rear fins.

Sure my bias is showing, but the Fury was the first entry into my database-that makes it permanent.

https://www.mystarcollectorcar.com/
COMMENTS
ROBERT:”A lot of the car guys say the Oldsmobile Super 88 or the Rocket 88 was the first real muscle car? Although Plymouth sure was a contender. 1949 was also the first.
MATT:”By far my favorite car Chrysler Corp has ever built. My dad hates them but I’m still waitin to find one in a barn somewhere”.