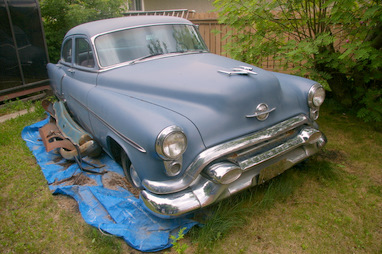 Clive Greabeiel was a car salesman in 1953 at a small town Olds dealership when he was given the task to pick up a brand new Olds 88 for a customer-at the factory several thousand miles away.

‘On the trip back with the car Clive realized that he’d made a mistake-he should have bought this car.’

Thanks to the incredibly smooth ride and well known reliability of the Oldsmobile, Clive knew that he would eventually own this classic early 50s behemoth. The opportunity came in the early 60s when the original owner passed away and the widow remembered Clive’s offer back when the car was brand new.

Clive didn’t buy this car as an investment-this was a full scale, no holds-barred family bus. 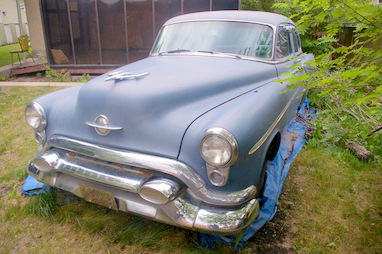 The first trip was a move to a new town several hundred miles away to start a new business. This car did full time work for almost 10 years during a period when every year the Big 3 carmakers made sure that your car looked as out of date as Little Richard at a hip-hop concert. The Olds was at least 2 styling eras past its due date when Clive bought it.

And he drove it through 3 more major styling change eras. Clive didn’t care because this giant early 50s Olds was all he’d ever wanted or needed. By the time this car was pulled from the first string team Olds was producing W-30 442s, Jimi Hendrix was dead and Nixon was well into his first term.

That’s why Clive finally caved in and accepted newer technology when he took the Olds out of action– maybe somebody told him that they’d switched to 12-volt batteries in the newer cars. Happily, Clive gave the 88 a great retirement and the two became inseparable on little jaunts around town for decades.

Clive passed away in 2001 and his son Gord bought the car from the estate. Gord’s health declined in 2005 and he gave the car to his son. Unfortunately, he blew up the motor during a very unwise high speed highway run so the car returned to Gord’s back yard. 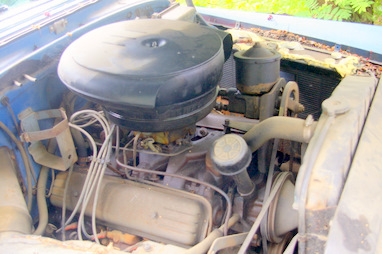 Gord was not amused.

Gord had considered selling the car, but with his health returning he’s become a lot more energetic so the future for the car is simple. Gord and his son plan to get Clive Greabiel’s lifetime favorite car back on the road-a rolling tribute to the man and the car .

Gord will be the wheel man…

ROBERT:”A man’s best friend isn’t always his dog. Looks like Clive found what he was looking for in this old Oldsmobile. I hope my 442 and I are remembered together. It’s good that his son and grandson are bring his Oldsmobile back in his memory”.