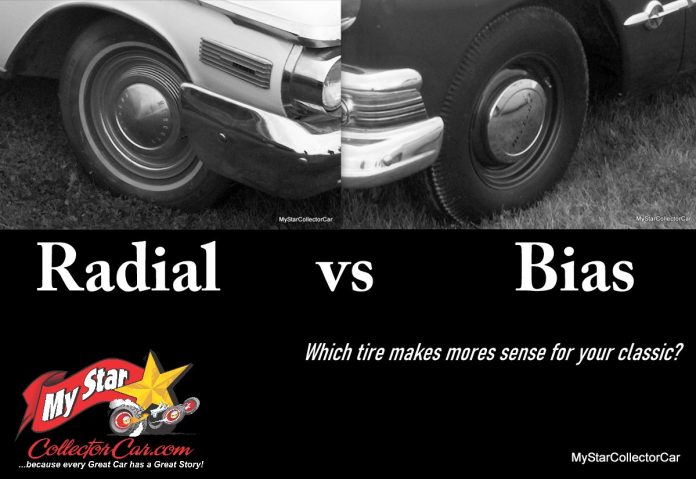 Rubber tires have been around since the mid-19th century when they debuted in a very basic form.

Eventually the pioneer inventors designed a rubber tire that held air and really softened the ride for early automotive customers, along with more than a few bike owners.

The standard issue tire for early North American vehicles was the bias tire while the automotive industry evolved over the years. A bias tire got its name from its basic design that positioned a series of fabric cords at 55-degree angles from the tire’s wheel rim, thus the bias name.

The fabric cords in bias tires were also designed to protect the air-filled round tubes in them, although eventually tires were built without tubes because of heat issues at higher speeds.

Radial tires debuted in 1948 when Michelin built them for its European market. Radial tires had a very different design from bias tires because the plies were positioned at a 90-degree angle and featured a layer of steel belts directly under the tread.

The net result was a radial tire offered longer life, less rolling resistance and, most importantly in my opinion here at MyStarCollectorCar, superior handling ability.

The superiority of the radial tire by comparison to the bias tire became even more obvious in 1983 when every domestic car left the factory with radial tires. A radial tire movement with roots in post-war Europe gathered enough momentum to reach North American shores as a standard factory product during the first years of the Reagan administration.

I was already very familiar with radials as a tire choice during the early stages of the 1970s-even the part where tire guys strongly advised a teenaged me not to mix radial tires with bias tires under any circumstances. It was very wise advice that went unheeded when I stuck bias ply snow tires on the back and kept radial tires on the front of my car.

My choices did not result in a collision, but I had to learn how to get up on the wheel during some of my  teenaged stunt driving episodes because of the bad tire match.

As mentioned earlier, the bias tire has largely disappeared from the market-with one major exception: the collector vehicle hobby. Many car guys still embrace the bias tire because it performs like a period-correct product from an era when vehicles were not pushed hard on the road due to lower highway speed limits and vehicle limitations at the time. Additionally, radial tires were either unavailable or too expensive.

My personal 21st century experience with bias ply-equipped vintage cars on modern highways is not good. The cars follow the road ruts and get pushed around on the road by wind–a lot, so drivers will spend a lot of time sawing on the steering wheel in an endless series of corrections at highway speeds.