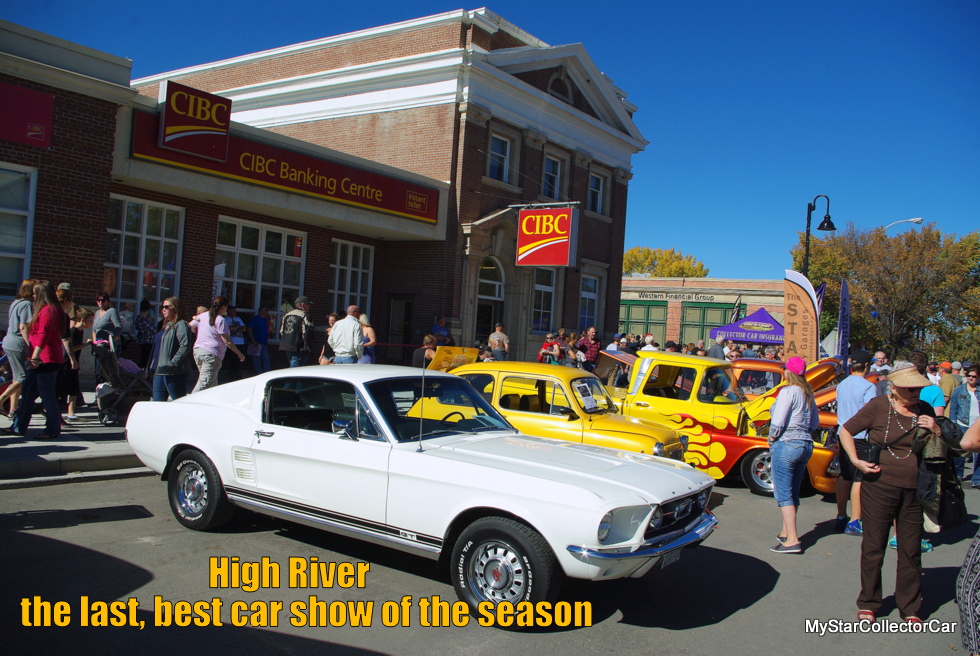 People know their neighbors and they are friendly in that small town kind of way.

“It is hard to believe this town suffered through one of the most devastating floods in its history just a few years ago, given the upbeat mood in High River.”

The flood tested the mettle of the High River people and they passed with flying colors.

They rallied under a “High River Strong” motto and proved they could walk the walk. 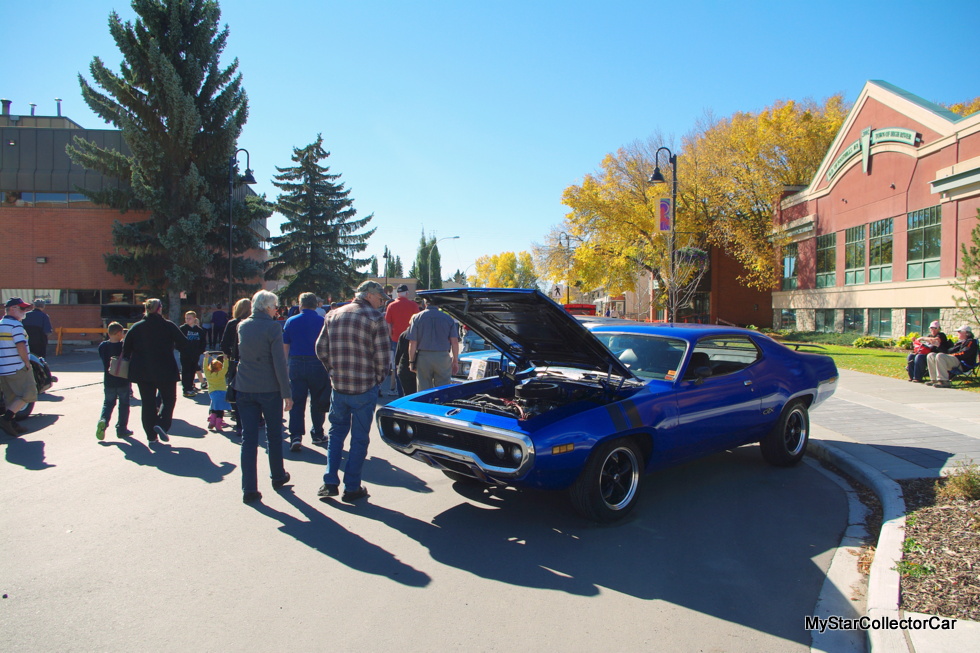 They even retained a sense of humor as evidenced by a sidewalk sign that advertised “A River Ran Through It” café. 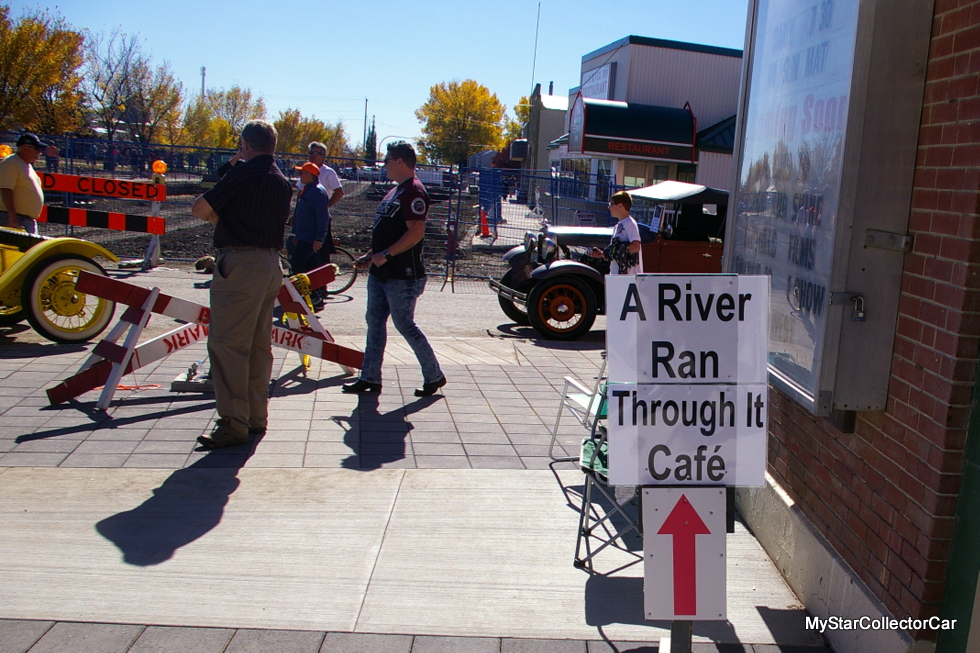 Outsiders may not be familiar with High River, outside of its movie role as Smallville (the childhood home of Superman-Christopher Reeves edition), but car guys are well aware of the town because of its annual car show. 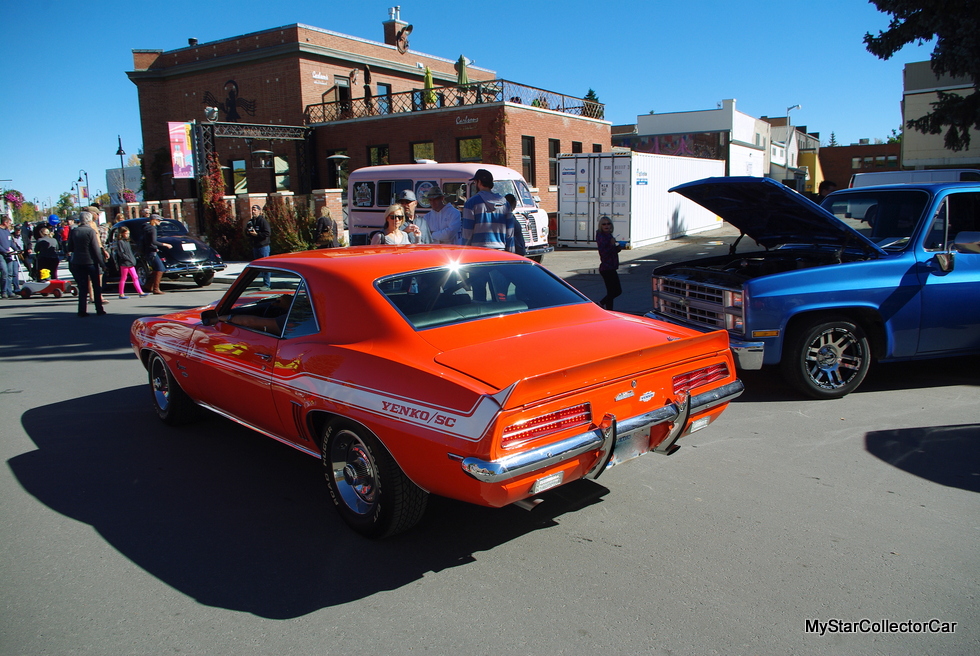 The High River show takes place in late September every year and attracts well over a thousand registered vehicles, along with a large herd of other rides not officially registered in the show. The timing is a gamble because it takes place at a time of year when weather is unpredictable for a prairie town in Alberta where you can see the mountains on the horizon. 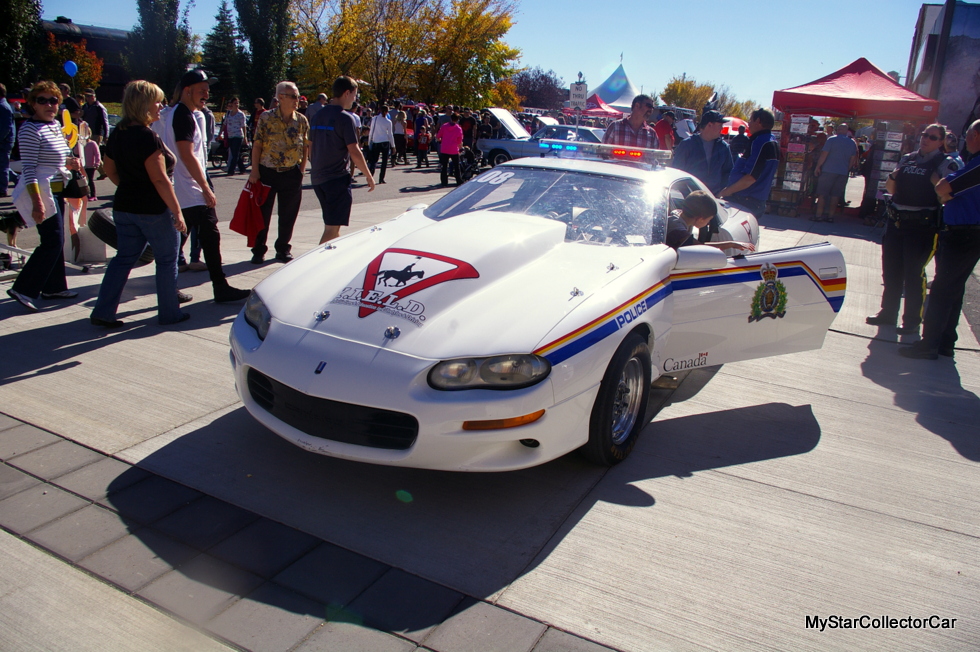 However, the weather gods must feel guilty about the propensity for wet weather during June in High River and have delivered sunny days for every one of our recent visits to their September show. 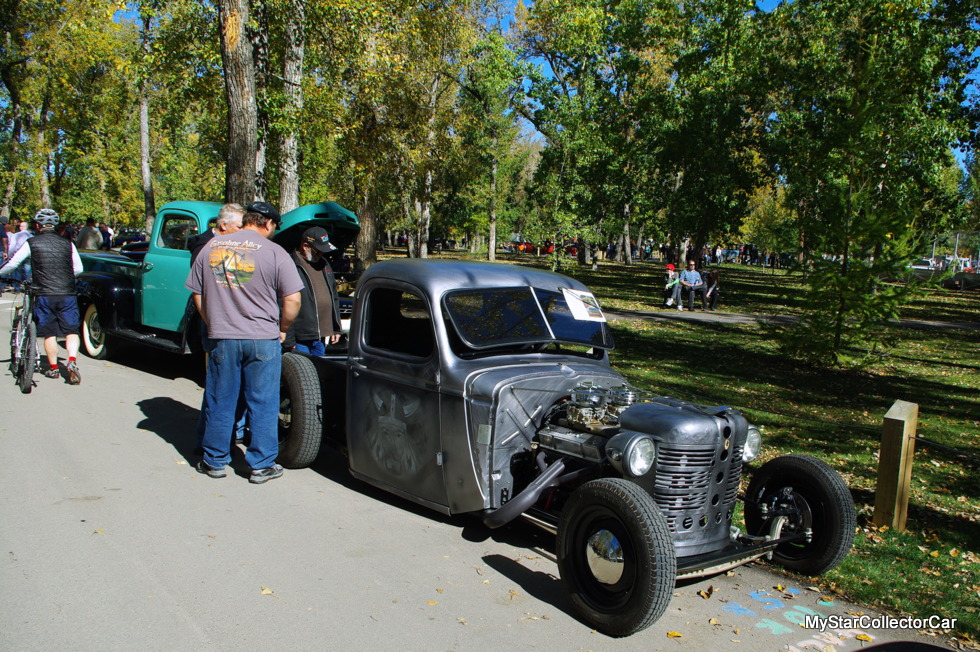 The town park was filled with vehicles, along with every street in the downtown core. We also noticed plenty of convertibles at the show because of the warm weather. 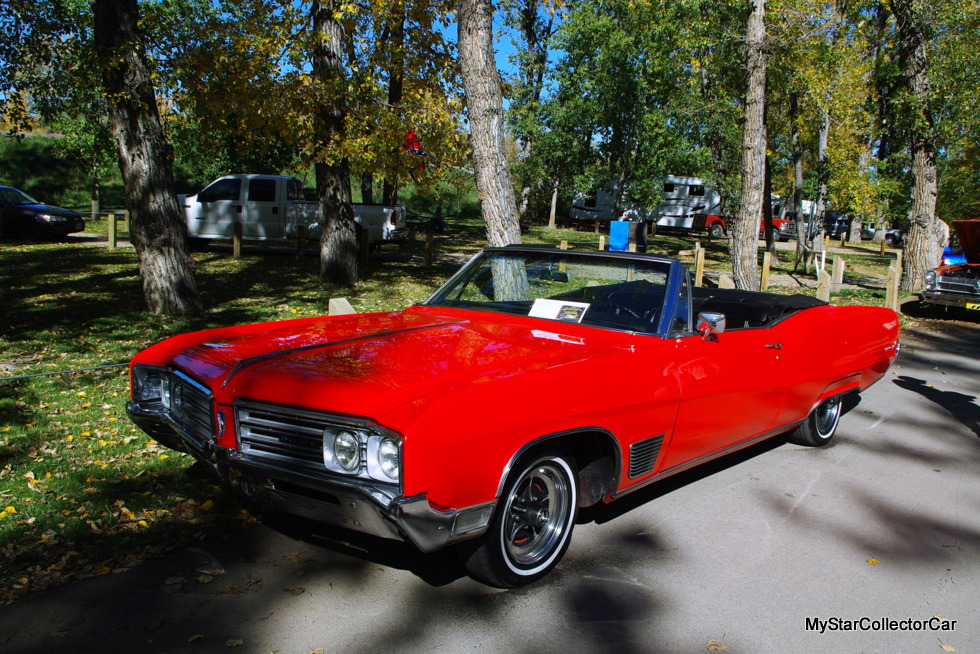 This year’s show was another home run and we also noticed a strong lineup of unusual rides. We have mentioned our basic MyStar game plan many times over the years: follow the crowds and see what has drawn their attention. The top of the list for High River was a crazy-looking 1938 Dodge rat rod truck built by one of the most creative guys we have encountered at any show. 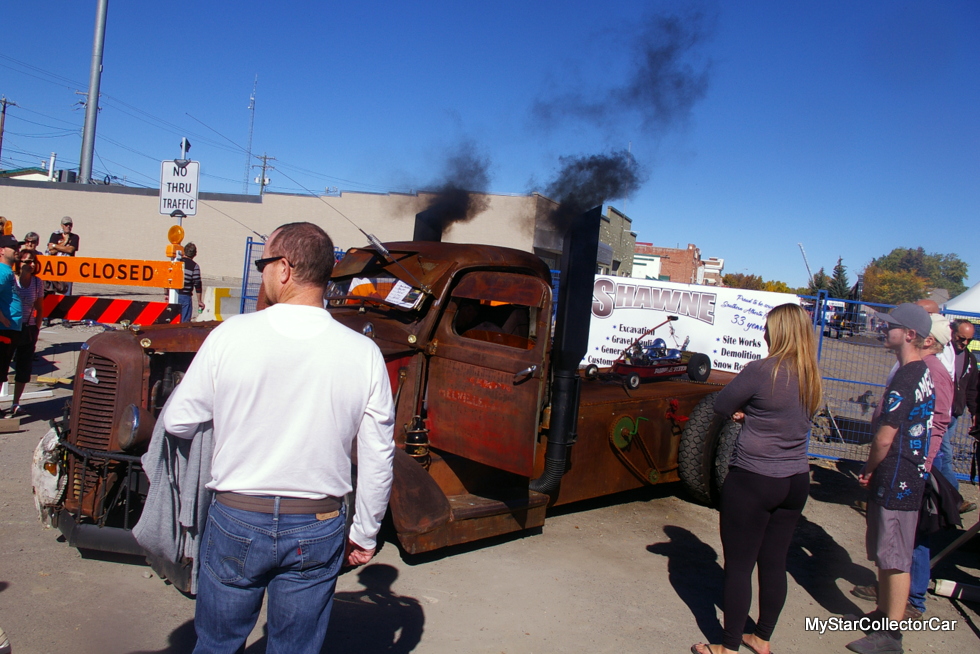 His truck was a focal point at the show and it was more difficult getting pictures of the truck than it was getting the truck’s story from its colorful owner/builder. Bear in mind its owner is an identical twin who is undoubtedly used to being the center of attention (speaking from personal experience in this department)-just not as much attention as his Dodge rattie. We got plenty of information from its talkative owner for a future MSCC story.

Another vehicle that got an incredible amount of attention was a 1961 Morris Minor pickup truck. It was a British transplant, complete with right hand drive, and its owner was happy to share its story with MSCC. This little Brit will be a future MSCC story for our readers and it is a good one. 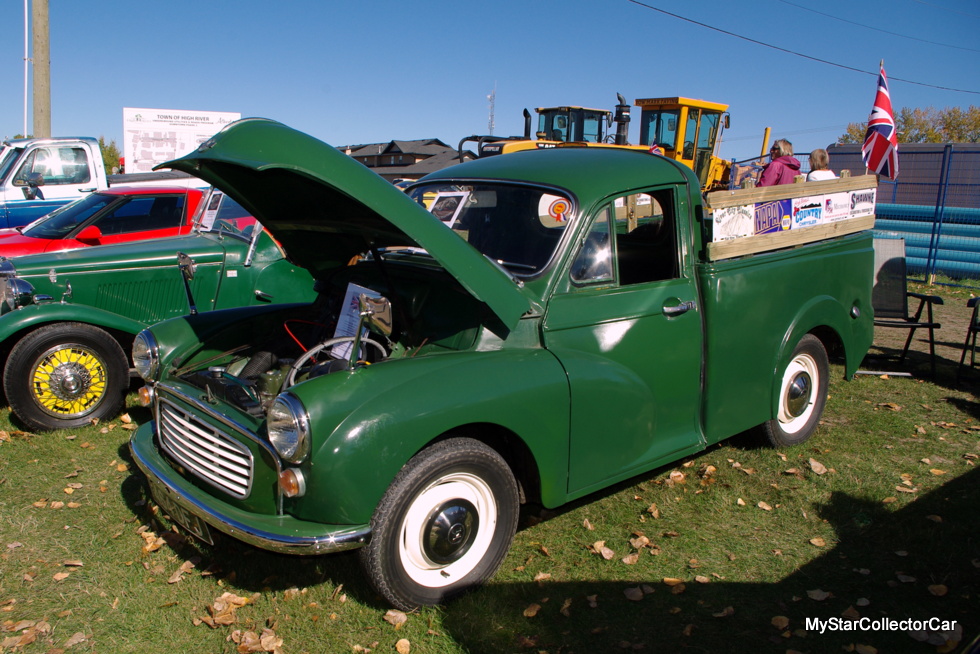 We also look for the personal history between the vehicle and owner when we do a story for MSCC.

A 1968 Thunderbird purchased almost 40 years ago by its current owner is a good example because this T-Bird was also his first car. How the two of them stayed together through all these years will be an excellent future MSCC story. 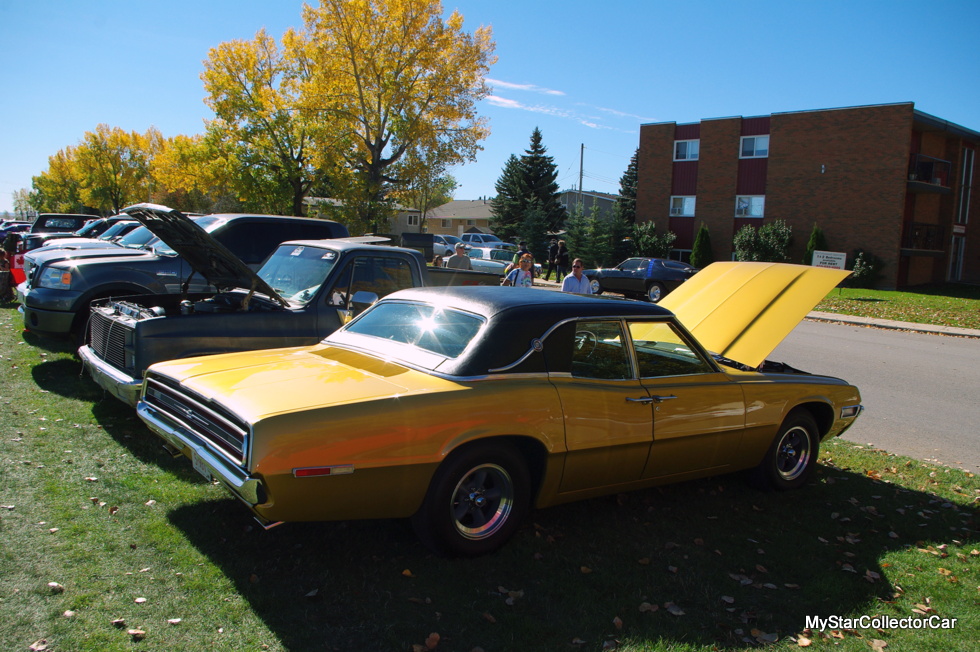 A Canadian truck also got our attention because this 1971 Fargo has stayed in one family since new-lately by marriage. The truck was the last of the Sweptline models from Chrysler and its family history makes it a home run of a story line for a future MSCC feature. 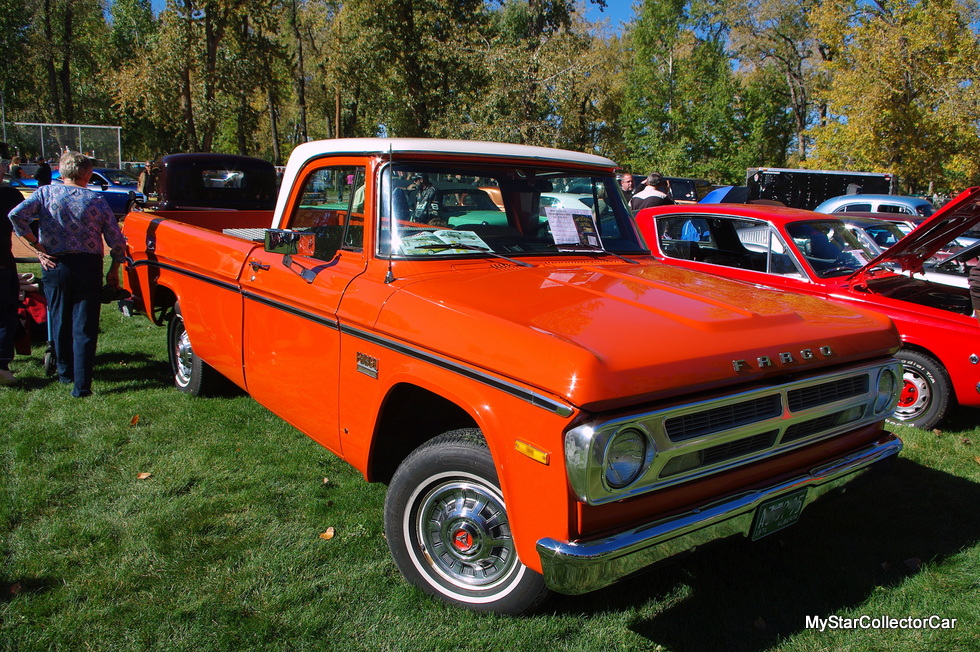 We like everything about the High River show, from the people, to the atmosphere and organization, right up to the guests of honor-the great lineup of vehicles in the show.