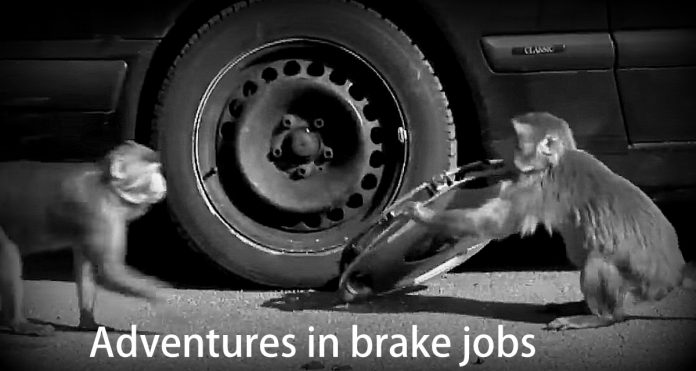 One of the less desirable features of vintage cars is they were built before automotive safety grabbed the steering wheel and took control of the industry.

Most of the safety improvements were designed to prevent harm to the vehicle’s occupants and, likely more importantly, the car company’s bottom line after the dawn of ambulance chasers.

It was a significant moment that went largely unnoticed by consumers because master cylinders are located under the hood-or hidden even more deeply from sight. Unnoticed right up to the moment when a leak in the single master cylinder braking system turned the unlucky driver into a very unwilling stuntman with no brakes.

I was well-armed with the above information when I tackled a master cylinder retro fit on an older vehicle. For me, there were too many positives regarding a swap from a single master cylinder to a double master cylinder on a vintage car, including the grim fact that my best stunt driving days occurred roughly between the ages of 16 and 21 during the 10-feet-tall-and-bullet-proof phase of my life. Truth be told, I was not particularly interested in reliving any of my young and extremely brash driving moments in life.

The two other major reasons? Most master brake cylinder swaps are relatively easy and can be switched back to the original equipment if that is the future direction taken by an owner.

“Relatively easy” is a term to which mechanically inclined people can relate, but it is not a term that can be attached to mechanical morons like me. If there is an easy path to a mechanical goal, I will find the most difficult, painful, and soul-crushing path to the same destination.

A switch to a dual master cylinder had me seriously considering Flintstone foot brakes after Day I, but I soldiered on to my intended goal, despite a series of mechanical misadventures in very tight places. For example, I was never meant to squeeze under the steering wheel of a retro domestic car (or any car for that matter) since I was about 11–plus I have no yoga training to make me bendier. But a new master brake cylinder forced me into a tight space under the steering wheel to separate the old master cylinder from the firewall. It was a little like stuffing an adult salmon into a goldfish bowl.

Manual dexterity is the ability to use one’s fingers for detailed and intricate work, but this talent is merely a concept for left-flippered seals like me. I should mention that I also had to change out a wheel cylinder after breaking the bleeder valve on the old one, therefore manual dexterity was in the cards for me–whether I wanted to play or not.

There were several instances when I was forced to use my right hand to attempt a difficult threading process with brake lines into the junction box because my dominant left hand was unable to meander into the right position. The saving grace was the fact we live in a right-handed world, so lefties like me are forced to use our other hand much more than most of the righties use their left hand. Plus I have limited finesse with either hand.

Other dexterity issues included inaccessible bolts on the wheel cylinder that forced me to improvise with their removal and replacement. Most of my efforts involved a painfully slow process with two small bolts that required microscopic finger turns into an extremely small and hidden target area.

My good fortune continued when I was also granted an opportunity to toughen up my hands every time a tool slipped and made me accidentally punch a metal component of the car. The list included the old car’s wheel well, frame and steering column, although the last one made me forget about the cramped area directly under the steering column for a few minutes.

The three-day brake job adventure flew by like three years for me, but eventually I won the battle and replaced the single chamber master cylinder. I completed the task by bleeding the brakes after a careful search for any extra parts turned up negative. Then it was time for my traditional singing and dancing celebration.