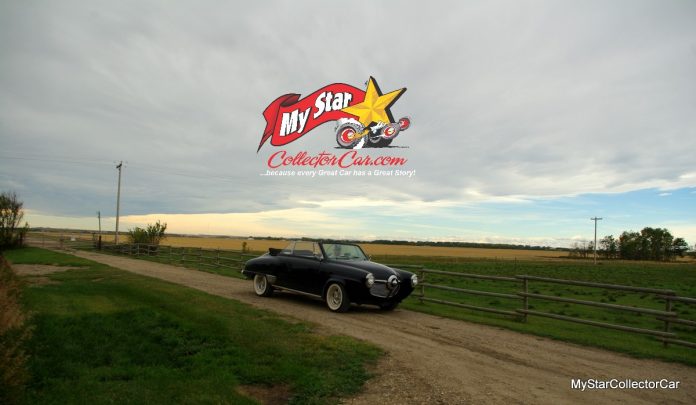 The 1948 Studebaker was slightly ahead of the competition in terms of style because of its more rounded design that was embraced by the Big Three in 1949, but a ’48 Studey was not a bullet-nosed model.

Studebaker was a small-sized car maker that operated on a much smaller budget than the Big Three, so the company used the same basic manufacturing platform over several years. Therefore, a ’48 Studey was essentially compatible with a new Studebaker model, although the newer bullet-nosed design from the 1951 Studey required a few modifications, according to Ray.

Ray loved the bullet-nosed Studeys and located a donor car with the grille, along with a 1950 Studebaker that provided the front clip for his ’48 Studey’s makeover. The donor car was half-submerged in a creek for 10 years, but fortunately it was the back half of the ’50 Studebaker, so Ray used its front end in his custom project.

The most important feature of Ray’s custom projects is their drivability, so he upgraded his ’48 Studebaker in a big way. The car now sports a 383 stroker version of GM’s famous small block 350 engine hooked up to a 700R automatic transmission that can handle the extra horses and delivers a wide range of gear ratios to keep the RPMs down at high speed.

The modern powertrain combination gave Ray’s 1948 Studey enough muscle to pull a trailer down the road with ease when he used the tandem for long road trips. Ray even modified the rear bumper to camouflage the Studey’s towing package and enhance the car’s overall custom style when he cut and narrowed the bumper.

Ray also built a custom air dam for the front end of his 1948 Studey to direct more air and cool down the car’s engine compartment when the car was towing the trailer.

He upgraded the car’s stopping power by adding big Lincoln drum brakes on the back and disc brakes on the front to slow down the Studey when the situation warrants it.

MyStarCollectorCar noticed many bug splats on the ’48 Studey convertible, a sure sign Ray spent more time on the gas pedal than the brake pedal last summer. The bug splats were also a sure sign he drives the car a great deal during the summer months, preferably with the top down on the ’48 Studey, so he installed an aftermarket wind deflector that he modified so it would fit in his vintage convertible and “make his wife happy”, according to Ray.

Other add-on creature comforts include power steering, power brakes and Honda Accord seats that fit like a glove on long trips.