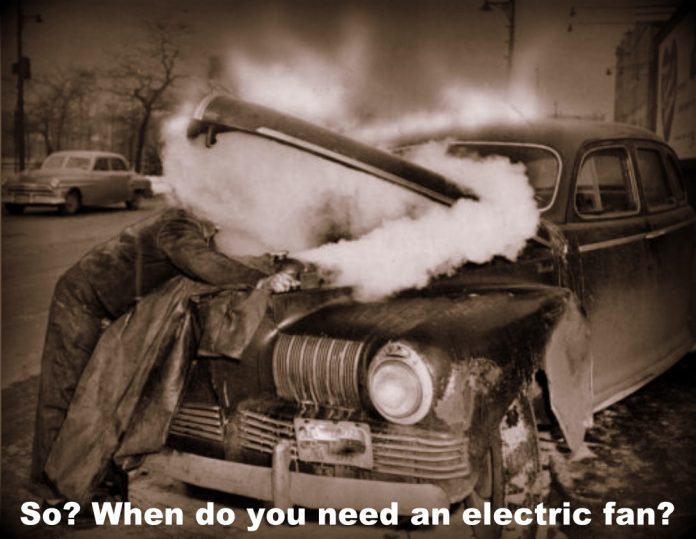 What are the advantages of an electric fan?

“Compared to a belt-driven engine cooling fan, an electric fan offers quite a few advantages. Its greatest advantage is that it can provide full airflow regardless of engine rpm. That means that when you’re sitting and idling, or going at slow vehicle speeds, the electric fan can still provide maximum air velocity to keep your engine cool. That’s what makes them great for high horsepower vehicles, off road trail vehicles and pretty much anything that gets hot or overheats at idle, sitting in traffic or other slow-speed conditions.“

You have electric fans for conventional vehicles but what kind of vehicles are these universal applications aimed at?

“Universal fans are ideal for when there is not a direct-fit electric fan system available for your specific vehicle. Another application for universal fans is to add an auxiliary fan in front of the radiator. These fans push air into the radiator and are meant to be used in conjunction with a belt-driven fan. This is ideal when you want to keep your belt-driven fan, but need extra cooling at idle and slow-vehicle speeds.“

What are the things you need to know when you’re setting up a universal electric fan?

“You definitely want to know how much space you have to work with. Measure the height and width of the radiator surface that you want to cover. Then measure the depth…what is the closest thing to the radiator. We recommend having at least ½ inch of clearance between the electric fan and the engine to allow for engine movement on the motor mounts and body flex. If the electric fan will be your primary cooling fan, you want to cover at least 75% of the radiator core surface with the fan shroud. Flex-A-Lite makes a variety of electric fans with injected-molded shrouds. These do a great job of pulling good airflow through as much of the radiator as possible, which provides better cooling than just pulling it through the typical basket style fan shroud. In some cases, the basket style is all that will fit, though.“

“If you’re mounting the fan on the front of the radiator, make sure it can be used as a pusher fan. Most reversible fans require you to remove the fan blade and turn it over in addition to reversing the polarity of the wiring (connecting black to 12-volt positive and red to ground).”

“Flex-A-Lite offers both 12-volt and 24-volt electric fans. Use the correct voltage for your vehicle. Most passenger vehicles have a 12-volt system while some diesel trucks are 12- volt.“

“With nearly all electric fans, you will need to run a relay. This minimizes the length of the high-amp wiring in the system both for safety and to provide maximum amperage to the fan. Flex-A-Lite offers several adjustable thermostat fan controllers. These function like relays, and the newest Flex-A-Lite compact controller includes a removable 5-prong relay. All of these Flex-A-Lite controllers allow you to adjust the fan activation temperature, the connect to the air conditioning system to turn the fan on any time the A/C is on and they have a provision for a manual override switch.“

When should you use an auxiliary electric fan?

“This is ideal when you want to keep your belt-driven fan but need extra cooling at idle and slow-vehicle speeds. “

As you can see, retrofitting to an electric fan requires planning but if it’s done properly you can hit the parade circuit in your old classic with a great deal of confidence.

Thank you Cole for filling in the blanks.